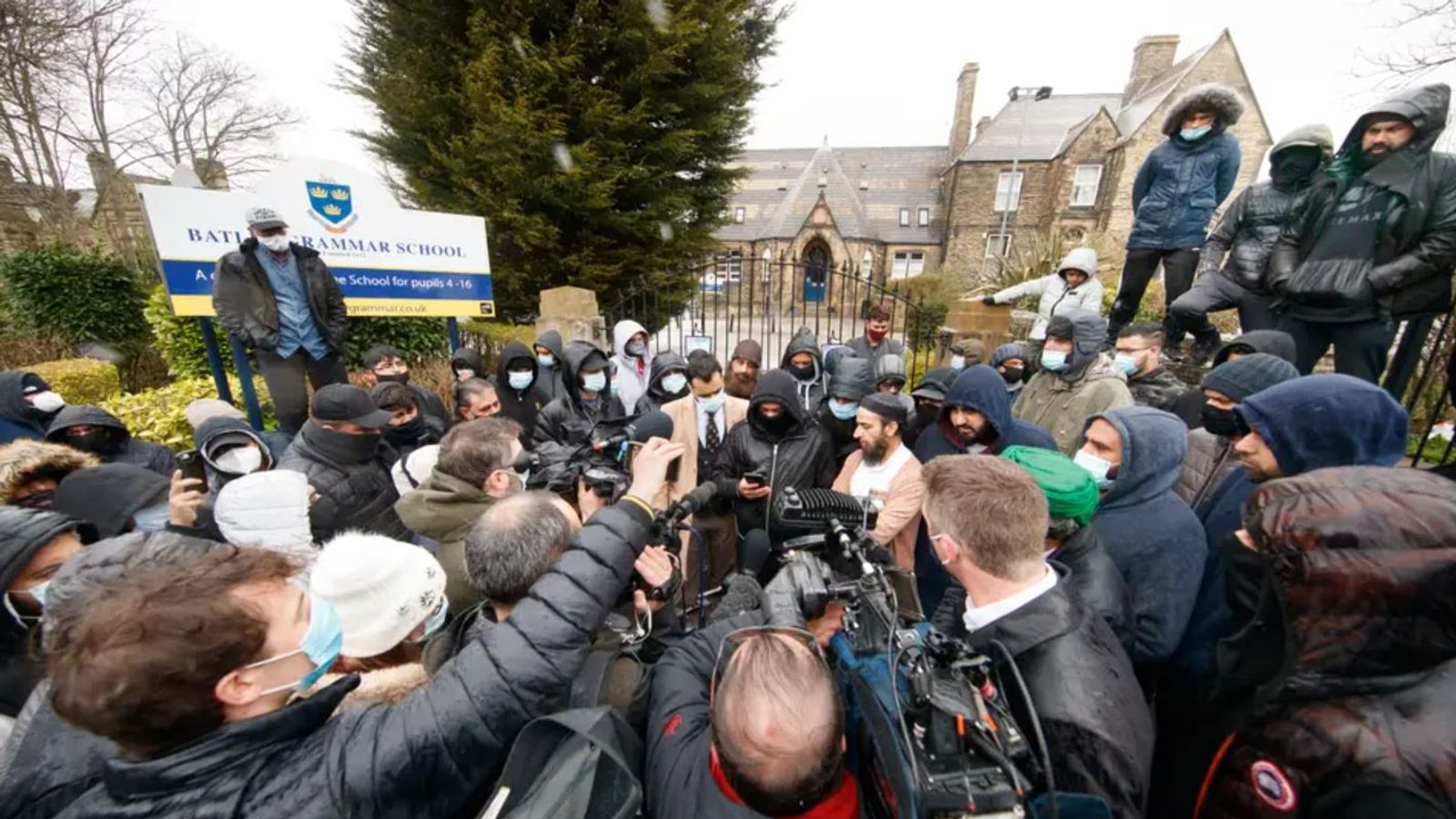 Demonstrations outside a school where a teacher showed a caricature of the Prophet Mohammed to pupils are “disturbing”, a cabinet minister has said.

Housing Secretary Robert Jenrick said the protests outside Batley Grammar School were “not right” and that “we shouldn’t have teachers feeling intimidated” as more people gathered there again on Friday.

“That is not a road we want to go down in this country so I would strongly urge people concerned about this issue not to do that,” he told Sky News.

Mr Jenrick added that reports the teacher is now in hiding are “very disturbing”.

Labour MP for Batley and Spen Tracy Brabin also accused people of “fanning the flames” of the row, which she said would “only provoke hate and division”.

Dozens of people gathered outside the school in West Yorkshire on Thursday calling for the teacher involved to be sacked, as police guarded the gates. More protesters arrived on Friday morning.

Speaking “on behalf of the Muslim community”, a protester read out a statement outside the school, saying: “The teachers have breached the position of trust and failed their duty of safeguarding, and this issue must be addressed as a matter of urgency.”

He claimed the school “had not taken the issue seriously”.

Image: People first crowded the school gates on Thursday calling for the teacher to be sacked. Pic: SWNS

Crowds of protesters on Thursday

The caricature of the prophet, believed to be one published by French magazine Charlie Hebdo, was shown to pupils in a religious studies lesson on 22 March, according to a letter seen by Sky News.

Depictions of Mohammed are considered to be deeply offensive within Islam.

The school has suspended the teacher involved, with headteacher Gary Kibble saying: “The school unequivocally apologises for using a totally inappropriate image in a recent religious studies lesson. It should not have been used.

“A member of staff has also relayed their most sincere apologies.”

The dispute comes after French teacher Samuel Paty was murdered following reports he showed an image of the prophet to pupils at a school near Paris.

Mohammed Shafiq, chief executive of the Ramadhan Foundation in Manchester, described the lesson as a “despicable attack on our faith”.

“Our hearts are pained to know a teacher working with 70% Muslim pupils didn’t consider the hurt this would cause,” he said.

Yunus Lunat, an executive member of the Indian Muslim Welfare Society in Batley, told Sky News he thinks the teacher “went off script” and was trying to “provoke”.

“I’m absolutely shocked that we’ve arrived where we are today. This wasn’t part of the approved curriculum,” he said.

The Department for Education last night condemned the demonstrations as “completely unacceptable”.

A spokesperson said in statement: “It is never acceptable to threaten or intimidate teachers. We encourage dialogue between parents and schools when issues emerge.

“However, the nature of protest we have seen, including issuing threats and in violation of coronavirus restrictions are completely unacceptable and must be brought to an end.”

Local MP Ms Brabin said she “welcomes the school’s apology” but the “focus must be on the welfare and education” of the pupils.

“Conversations between the school, parents and local community must proceed in a dignified and respectful matter,” she said.

“Those who seek to fan the flames of this incident will only provoke hate and division in our community and I would encourage all involved to work together and calm the situation.”

Mr Shafiq and Mr Lunat expressed fears the debate will now be “hijacked” by those looking to criticise British Muslims.

“We urge all who love the Prophet Mohammed within the British Muslim community to remember our responsibilities to reject violence and never give in to the narrative that some want to paint us as,” Mr Shafiq said.

He also accused the government of “amplifying divisions” by condemning the protests.

West Yorkshire Police confirmed they were called to monitor the demonstrations on both days, but no COVID fines or arrests were made.