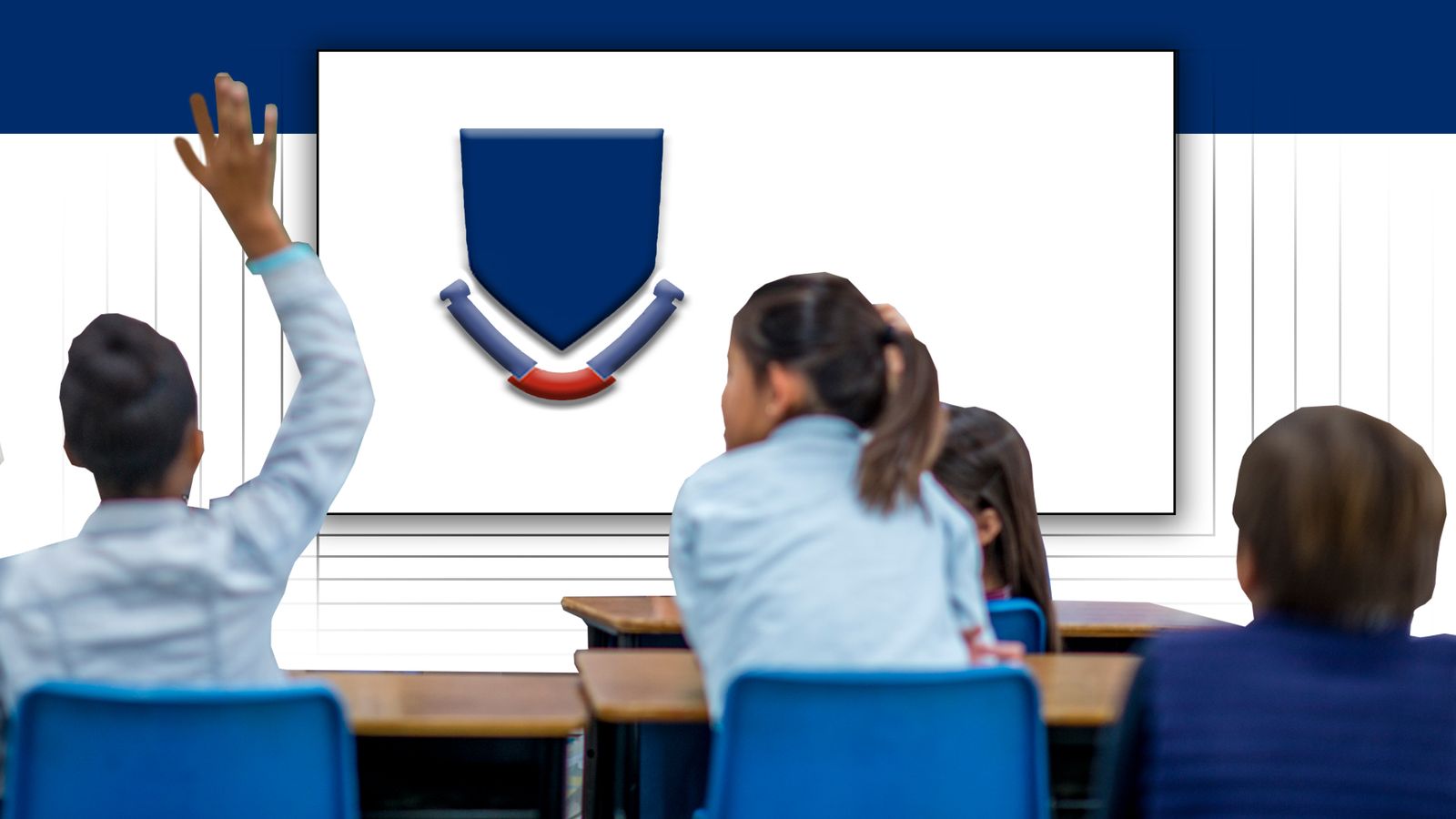 Protests outside a Yorkshire school over a teacher showing a class a caricature of the Prophet Mohammed have sparked a conversation about freedom of expression, religious freedoms and what is appropriate to show and teach children.

The unnamed member of staff is understood to have been teaching students about blasphemy in a religious studies (RS) class at Batley Grammar School this week.

Parents complained to the school, saying that not only was it of the prophet but it was a controversial caricature published by French satirical magazine Charlie Hebdo.

Image: A local community leader speaks to the crowd of protesters

Depictions of the prophet are regarded as highly offensive by Muslims.

The publication of images by Charlie Hebdo led to death threats against staff, a petrol bomb at its offices in 2011 and a deadly attack on its newsroom in 2015 by Islamic State supporters.

The Batley protest has sparked a conversation about freedom of expression, freedom of religion and what is appropriate to show and teach children.

Sky News looks at the different points of view:

Islamic education expert: ‘RS is about learning about all religions and respecting others views’

Dr Abdullah Sahin, reader in Islamic education at the University of Warwick’s department of education, said it is “crucial” RS is taught in schools.

“It allows children to explore other religious traditions and world views and promotes respect of one another,” he told Sky News.

“That doesn’t mean there should not be a critical aspect, there absolutely should be, but I think this incident highlights that RS teachers must never lose sight of the perspective that we’re teaching religion with good in mind.

Image: Parents are upset children were shown the offensive image

“These children were reportedly 13, 14 years old, this was not a university debate – I don’t think the materials used were appropriate.

“This is not about freedom of expression. There is no way the teacher would not have known this would be controversial and offensive to Muslims, this cartoon has been making the news for about a decade.

“I think the school’s response, to apologise, was appropriate and the parents have a right to be angry but should accept the apology.”

Dr Sahin added that RS teachers, like all teachers, have to abide by a code of conduct, including that they should not impart their personal views on pupils.

He said he does not think the government needs to provide guidance on this issue as most RS teachers understand and respect what they are there to teach.

“Yes, we need to foster critical questions but you’ve got to have the moral respect, the understanding of one another and being positively curious – that’s what’s brilliant about the British education system,” he added.

“But, you can encourage that critical aspect through good literacy to gain a good understanding – I don’t think this was appropriate literature.”

Freedom of expression campaigner: ‘Context and nuance is needed’

Ruth Smeeth, CEO of Index on Censorship, said context is “really important” when it comes to teaching something as controversial as this.

“It’s incredibly important everyone is taught about their right to free expression, to speak out, to protest,” she told Sky News.

“That includes teaching about the Prophet Mohammed but it depends on the context, how that class was being taught.

“Was it an ethics class for 17-year-olds or an introduction to Islam for 11-year-olds – the latter would be inappropriate.

“If this was the Charlie Hebdo cartoon of the prophet, you have to take into account a teacher was murdered in France last year over this image, so we do have to be protective of what happens in the independent space of the classroom.”

She said that the image may be shown to students as part of a conversation where they are told they will most likely fundamentally disagree with it as part of a lesson on ethics.

“Having nuance about this, viewing the expression of what is relevant and appropriate for different situations is essential.”

The Muslim Council of Britain said images like the one published in Charlie Hebdo were “extremely offensive… and plays into the Islamophobic trope of Muslims and/or Islam being synonymous with terrorism, and Muslims having a unique penchant for violence”.

It said that teachers have a “duty of care” towards their pupils and under National Education Union guidance teachers should use their acquired skills to “safeguard pupils, demonstrating reasonable and careful professional standards” while at work.

“The need to safeguard children in the face of the current climate of increased hostility towards Muslims – and indeed BAME – school children is acute,” the group said.

It said a 2015 study looking at young people’s attitudes towards Muslims found 31% agreed that “Muslims are taking over England”, while Childline in 2017 reported more than 2,500 counselling sessions for children concerned about race and faith-based bullying.

The group denied that showing the image was freedom of expression and said “context matters” as in this instance it is widely known that the image is offensive.

It said children should be taught about all different subjects, some difficult, but teachers should ask if what they are teaching is helping children understand, especially if they are already being bullied for being Muslim.

“When it’s controversial, no matter what the subject is, parents need to have a say – but not a veto,” it added.