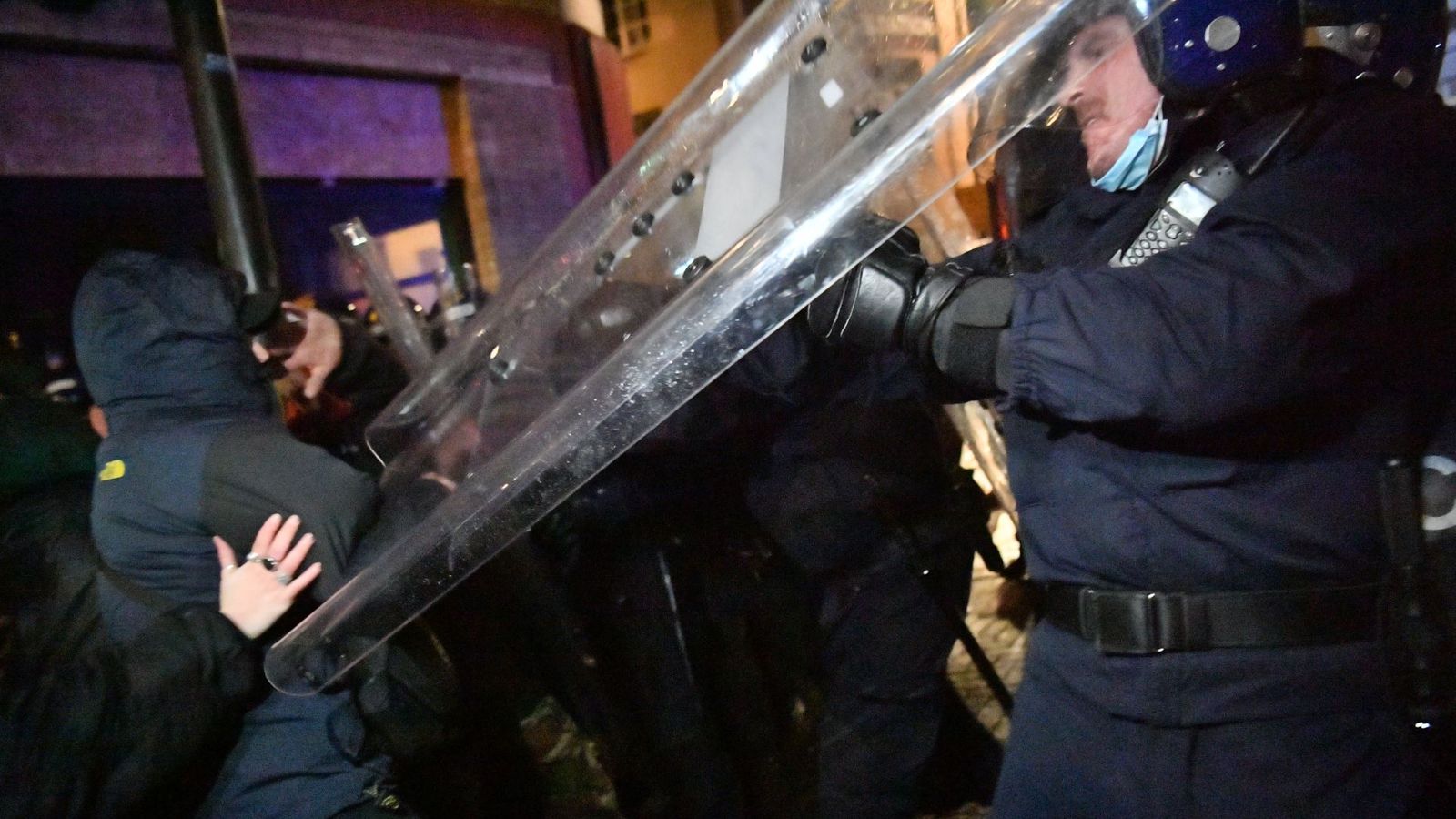 Eggs and glass bottles have been thrown at officers during a third “Kill the Bill” demonstration in Bristol – with the police saying that protesters shone lasers in their faces.

More than 1,000 people were rallying in the city centre, but tensions rose at 10pm last night as officers wearing helmets and holding shields began calling for the crowd to disperse.

Half an hour later, Avon and Somerset Police confirmed arrests had been made, with the force warning: “We will not tolerate violent disorder.”

Image: A large police presence was on duty throughout the night – with dogs and horses used to move crowds back

And as midnight approached, the force confirmed that a “large number of people” remained at the scene – tweeting that its officers have the ability to use reasonable force to prevent crime, protect people and property”.

They added: “We don’t want to use force but we have a duty to enforce the law.”

Image: ‘We will not tolerate violence disorder,’ the force says

Demonstrators could be heard chanting “Justice for Sarah” and “Who do you protect?”, and some of those present were seen dancing to music despite heavy rain.

A large police presence was on duty throughout the night, with horses and dogs used to help move the crowd back.

Rows of officers and vans were used to block the protesters from Bridewell police station, where a number of police vehicles had been set alight during violent scenes last Sunday.

Officers had previously urged people not to attend last night’s demonstration because of the risk of spreading COVID-19.

Image: As midnight approached, a ‘large number of people’ remained at the scene

Friday’s protest – which was against the government’s Police, Crime, Sentencing and Courts Bill – had started peacefully, and the size of the crowd grew as the evening progressed.

The bill would give police in England and Wales more power to impose conditions on non-violent protests, including those deemed too noisy or a nuisance.

Image: A number of arrests have been made, Avon and Somerset Police said

Those convicted under the proposed legislation could face a fine or a jail term.

Nine people were arrested in connection with last Sunday’s disorder in Bristol, while 15 others were held following a second protest on Tuesday night.

Earlier on Friday, the National Police Chiefs’ Council had warned violent protesters will “face the full weight of the law”.

Martin Hewitt added: “I would ask people planning to protest this weekend to think carefully and consider whether joining a large gathering outside, in the midst of a pandemic, and potentially being near the scene of violence like we saw last weekend, is something that is safe for them as individuals to do.”

He also claimed a number of people who attended the demonstration were “intent on causing violence and causing damage” – and those arrested came from “all over the United Kingdom”.

Mr Hewitt went on to confirm that one of those who has been imprisoned following last Sunday’s unrest was someone already on bail for assaulting police officers.