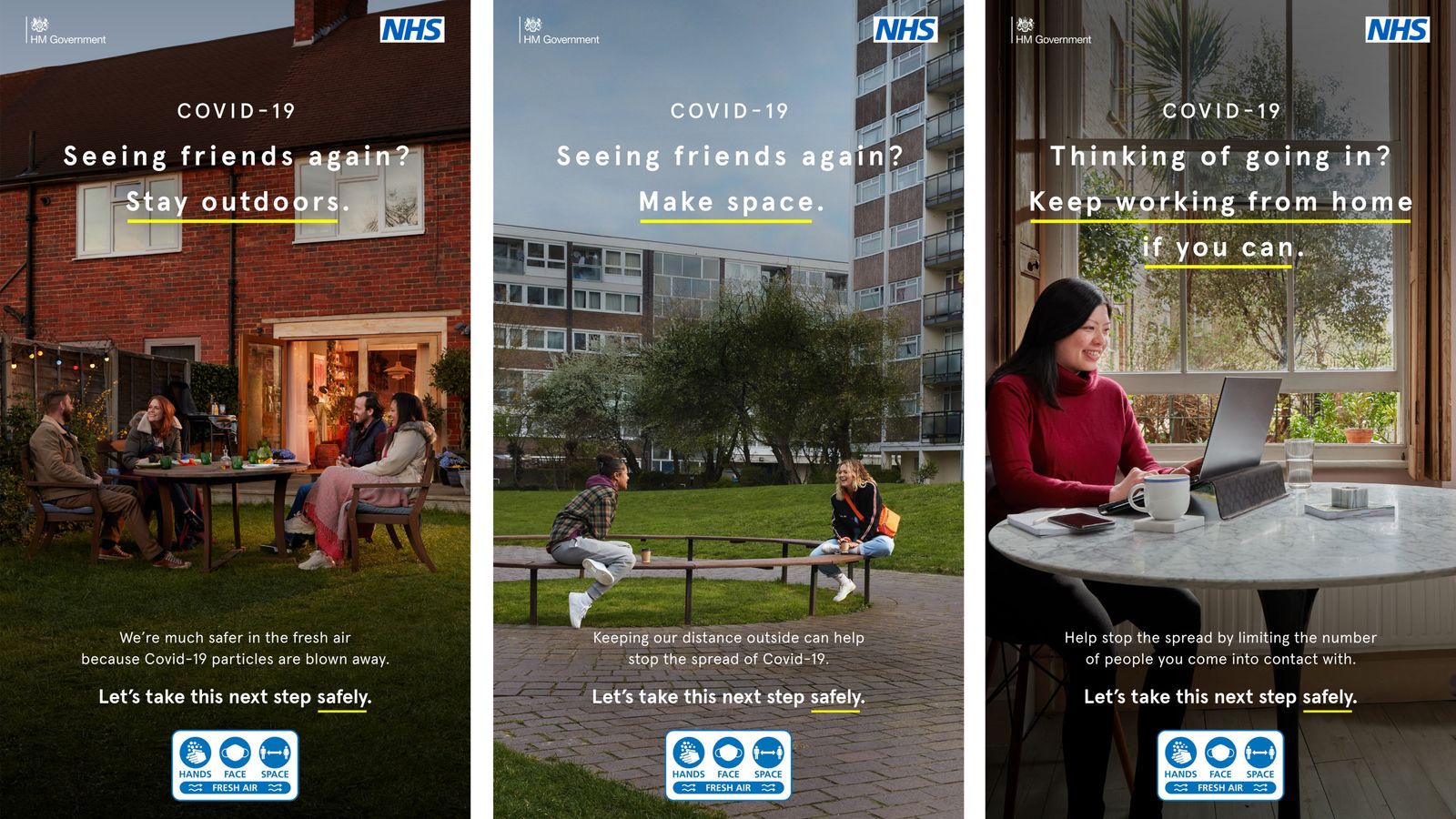 Lockdown might be easing but it is still forbidden to meet indoors with people from other households.

That is the warning from the government in an advertising campaign beginning later today on television, radio and online.

It comes as England’s lockdown eases to allow up to six people from two households to socialise in parks and gardens and for outdoor sports facilities to reopen.

Wales, Scotland and Northern Ireland will also ease some restrictions this week.

But in the government’s advert, GP Dr Hilary Jones MBE reminded people to “take this next step safely”, with an animation showing the spread of coronavirus particles between a group meeting indoors compared with a group meeting in a garden.

Image: The adverts remind the public that they must stay outside when meeting others

Scientists have said that smaller droplets and aerosols containing the virus remain suspended in the air longer inside. This means they are more likely to be inhaled.

The advert says people should open the windows in their homes to improve ventilation.

Health Secretary Matt Hancock said: “We have come so far thanks to the vaccine rollout and that progress must be protected.

“So let’s take this next step safely, when you meet others do so outdoors, and keep a safe distance.”

England’s chief medical officer, Professor Chris Whitty, said the number of coronavirus cases in the UK has been reduced during national lockdowns “thanks to the efforts of the public”.

But he added that it is “very clear that outdoor spaces are safer than indoors”.

NHS psychologist Laverne Antrobus advised planning meetings carefully to ensure that no more than six people are involved and resisting peer pressure to break the rules.

“The new guidance around meeting a group of people outdoors is really exciting and is a big step in right direction, however, it’s really important to stick to the guidance and only meet outdoors,” she said.

“This may mean being put in situations where you have to say no to joining a large group of more than six, or perhaps feeling pressured to go indoors with people outside your bubble.

“It is so important to set your boundaries and be assertive in those situations, and to continue following the guidance to keep yourself and your loved ones safe from the virus.”

Image: People are being encouraged to enjoy the outdoors

Meanwhile, Mark Wasilewski, park manager for St James’s Park and Green Park in London, encouraged people to “use every opportunity” to enjoy the outdoors and use parks – but to be “mindful” and keep their distance from others.

“We ask people to try and stick to paths wherever they can,” he told Sky News.

“We ask people to even maybe stagger their visits to the park to different times of day, maybe earlier in the morning or later in the evening so that not everyone comes at the same time.”