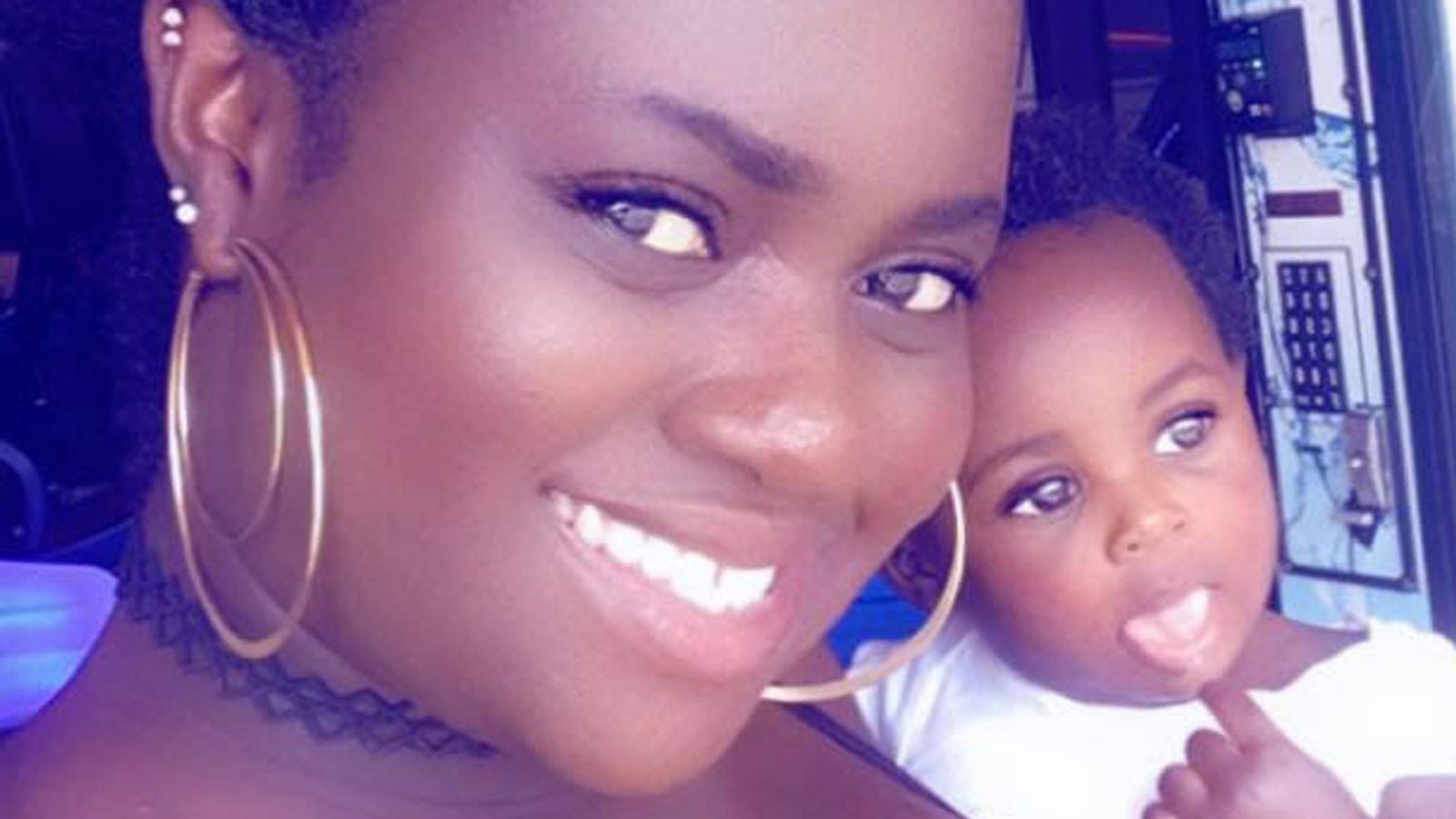 A coroner has called for Boris Johnson to begin a coronavirus inquiry as soon as it is practical after concluding it is unclear when and where a 28-year-old nurse who died with COVID-19 contracted it.

Mary Agyapong died at Luton and Dunstable Hospital, where she worked, on 12 April last year, a few days after giving birth to her second child.

In a narrative verdict, coroner Emma Whitting said Ms Agyapong died of multiple organ failure and COVID-19, adding: “It remains unclear where and when her exposure to the virus had occurred.”

Image: Mary Agyapong when she was pregnant with her first child

Ms Whitting said Ms Agyapong’s death was not only a “tragedy” for her family, but for “society too”.

The coroner added: “It is important that we learn from all of the lives that have been lost as a result of this terrible pandemic and to consider the wider policy implications from each and every one of these.

“Since this is a process which goes far beyond a coroner’s inquest and the prime minister has indicated his intention to hold a full public inquiry into the pandemic, I urge him to proceed with this as soon as practicable.”

Mary Agyapong had been concerned about contracting coronavirus on the wards while heavily pregnant, her widower, Ernest Boateng, told Bedfordshire and Luton Coroner’s Court.

The senior nurse, who lived in Luton and was originally from Ghana, was admitted to hospital with breathing difficulties on 5 April.

Mr Boateng said his wife was “breathless, exhausted and weak”. She was discharged later that day – something she was apparently unhappy with.

“I could not believe that she had been discharged from the hospital in her state, as she was so poorly,” Mr Boateng said.

Image: Earnest Boateng said he ‘could not believe’ his wife had been discharged from hospital

Her daughter was delivered by Caesarean section and transferred to the neonatal unit because she was premature.

Ms Agyapong was reportedly not allowed to hold her baby, also called Mary, after testing positive for COVID-19 earlier that evening.

The following day, 8 April, her condition worsened and she was taken to intensive care.

She died four days later. Mr Boateng did not have enough time to get to the hospital to say goodbye to his wife.

Mr Boateng told the court his wife was “very concerned about the situation involving COVID-19” and would shower as soon as she got home from work, sleeping in the spare room to protect her husband and young son.

Mr Boateng said he strongly believed his wife contracted coronavirus while at work, and also questioned why she was discharged from hospital on 5 April with a course of antibiotics, despite having COVID symptoms.

Dr William Manning, who discharged Ms Agyapong after her initial hospital admission, told the inquest he “suspected she had COVID-19” but sent her home because she did not require oxygen.

Other medical staff said they were satisfied with the care given to Ms Agyapong, adding that her condition deteriorated rapidly.

Dr Deborah Shaw, an intensive care consultant who saw Ms Agyapong the day after she gave birth, said: “I was very happy with the level of care she was getting.”

Dr Muhammad Peerbhoy, a consultant physician who saw the patient the same day, added: “In my opinion, I think the treatment was proportionate.”

Coroner Emma Whitting said previously that she had not been alerted to any systemic failures at the hospital.

Ernest Boateng, speaking after the conclusion of the inquest, said: “The sudden death of my wife and the mother of our two children has been the hardest pain to bear.

“I am glad that those who were involved in Mary’s care in the final weeks of her life have had to give a full account of what happened.

“I hope that the fact that they have had to do so will remind them of the need to always give the best possible care to women in Mary’s situation – especially black women who are themselves on the frontline of healthcare.”

He added: “I do not want Mary to die in vain and hope that changes can be made to ensure that all women who reach 20 weeks of pregnancy be allowed to work from home or be suspended on full pay, as no family should ever have to go through what I have.”

Mr Boateng’s solicitor, Suzanne White, said: “Ernest will take time to reflect on the accounts that have been given and will now consider his next steps.”

David Carter, chief executive of Bedfordshire Hospitals NHS Foundation Trust, said: “Mary was a highly valued and loved member of our team and a fantastic nurse, and we still feel her loss.

“We are reassured that the coroner has found no areas of concern regarding our support for, or care of Mary, and I would like to pay tribute to our staff who did everything they could for Mary in hugely challenging circumstances.”

A crowdfunding campaign for Ms Agyapong’s two children, set up following her death, has raised almost £200,000 to date.

Sarah Everard: Priti Patel says ‘images can be taken out of context’ after review finds police ‘acted appropriately’ at vigil