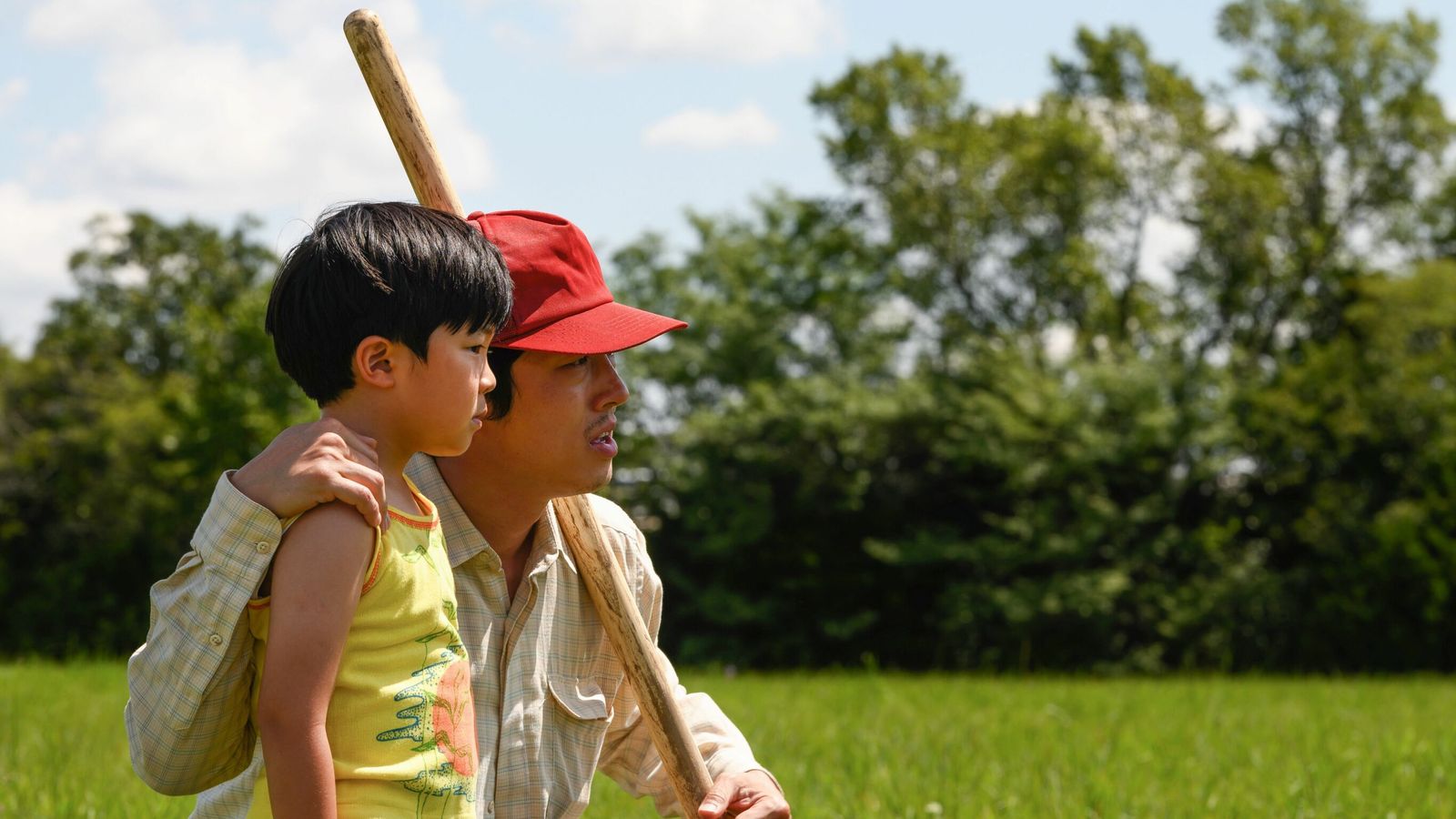 In many ways Minari is a quiet, gentle film but it’s impact on awards season has been quite the opposite, with the drama leading nominations and making history in the process.

The story of a Korean American family trying to make it as farmers in Arkansas in the 1980s is in the running for six Baftas and the same number of Oscars.

It’s also managed several firsts ahead of the Academy Awards – Steven Yeun (known to many as the Walking Dead’s Glenn Rhee) is the first Asian-American star to get a leading actor nod, Yuh-jung Youn is the first Korean actress to ever be nominated and Lee Isaac Chung, who based the film on his own experiences growing up, is one of two directors of Asian descent in the directing category – the first time that’s happened in Oscars history.

While awards season may sound like the conclusion of a film’s life cycle, Chung told Sky News that as Minari is still to reach many audiences (it’s out here on Friday) he’s still waiting to gauge reaction.

“I feel like we’re at the point where we’re setting the table, basically, and we’re starting to finally invite everyone to the table to watch this thing,” he said.

“So I’m that nervous chef who’s kind of seeing how people are going to enjoy this meal, basically.”

Chung also says the success of the movie so far has come as a surprise – and that as it is semi-autobiographical he does feel a little exposed.

He said: “There are moments that I wonder, ‘what have you done, Isaac?’ You know, ‘why did you do this?’

“Part of you doesn’t realize that a film might find this sort of audience and a lot of people end up watching it, I was just trying to stay true to my story and to a sort of story that I’d want to leave behind for my daughter.”

“More than anyone else, I’m worried for my parents because I feel like, you know, I kind of reveal our whole family story and they didn’t ask me to do this, so I’m just trying to trying to make sure that they’re taken care of and that none of this is too overwhelming for them.”

Chung says the popularity of both movies suggests a shift in attitudes towards what were previously thought of as “foreign films”.

“I was so excited when Parasite won the Oscar last year, and part of that was the shared Korean heritage and also it was just knowing that Bong Joon Ho made an incredible film and it didn’t matter what language they were speaking, what country it was from, audiences all around the world responded to it,” Chung said.

“And that sort of thing gives me hope that audiences everywhere, we’re all starting to see that all our stories in whatever country we live in, they’re all human stories, they all kind of speak to a similar aspect of who we are.”

“So I hope that Minari would work in that same way, and that’s really all I could ask for.”

Largely set on rural farmland, the film provides some much needed visual escapism – particularly for those of us who haven’t been able to leave their local area for months during lockdown.

Chung says it was important for him to fully immerse the audience in his characters’ world.

“I wanted the audience to feel like they are on a farm for an hour and a half or two hours, and we paid a lot of attention to that in the production and also in the post-production,” he explained.

“We were securing the right bug sounds and the right frog sounds and all these little things that would help envelop an audience and transport them – so it’s a bit of a shame that there are a lot of theatres that won’t be able to screen this.”

“But we hope that people still get that experience, and I just hope they turn the volume up and try to watch on the big screen – as big a screen as possible.”

Like a lot of film-makers who’ve had movies out during the pandemic, Chung is disappointed that his picture won’t get a proper theatrical release – but is focussing on the positives.

“Obviously, I still think that the theatrical experience is really superior just because of that communal aspect of it.”

“And when we premiered this a year ago at Sundance, that’s what was striking to me when we showed it, being in that audience, hearing the laughs and the communal oohs and ahhs, in a way to me that felt like sort of a sacred space, and that’s something I would wish that we could have more of.”

“But this is the best that we can do, and I still feel like there will be families who’ll be able to watch this together, families and tight friends and stuff like that, and I just hope that goes well – and I think that is a good thing, a positive thing.”

We’re in the thick of awards season now – and with the Baftas and Oscars both taking place within the next month we’ll soon know which nominations become wins for Minari.

Chung says his challenge is to appreciate the moment, especially as it’s something he never anticipated.

“It’s just an honour, I’m just trying to be grateful, stop and be grateful, that’s a big thing for me these days,” he said.

“The attention and all the interviews and all that, it has been wild and something that I’m not used to.”

“But, you know, I feel as though I’m always going to look back at this time and kind of be in wonder at it, so I’m just trying to take it all in and enjoy the wave.”

Minari is out On Demand and in virtual cinemas from the 2nd of April.

COVID-19: Millions of people told they no longer need to shield from coronavirus