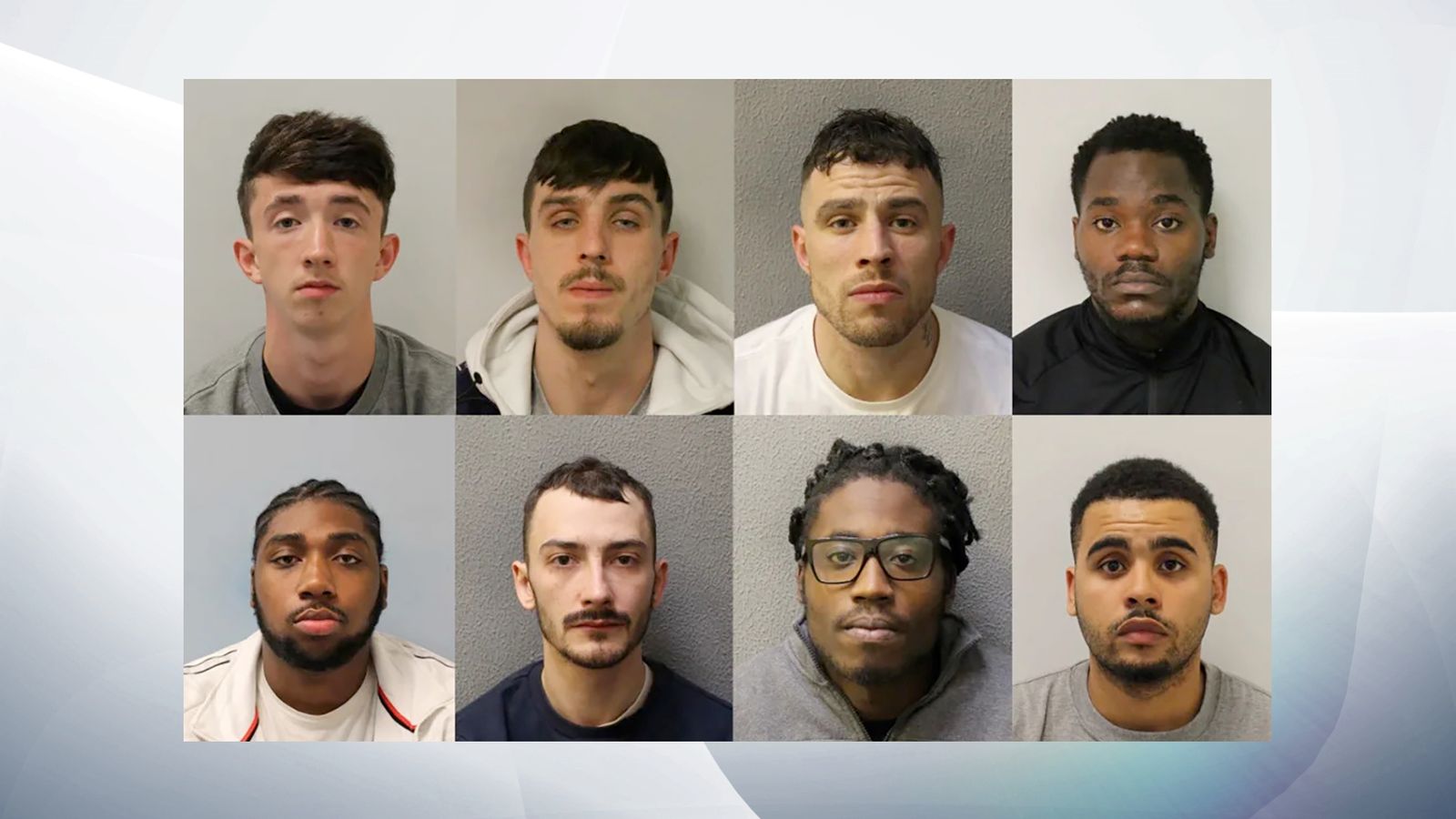 A group of violent robbers from London, who tried to rob police officers who had them under surveillance, have been jailed for a total of 100 years.

The eight men were sentenced at Harrow Crown Court this week after a guilty verdict in November.

During a four-week trial, the court heard how the men were part of an organised gang of criminals who carried out a series of robberies and burglaries between April 2020 and July 2020.

Kolasinac confronted moped robbers who attacked him and Mesut Ozil. One of the suspects, Jordan Northover, has been jailed for 18 years

The gang were alleged to have forced their way into homes or confronted people in cars, demanding money and high-value watches.

The offences were committed mainly in north London, around Finchley, Barnet and Hampstead.

The court heard the members regularly carried knives and machetes to threaten their victims.

In all, 20 offences are believed to have been committed by the gang members, sometimes working in pairs but usually in groups of four or five.

The Metropolitan Police’s specialist crime unit, known as the Flying Squad, linked the offences together and placed the gang under surveillance.

On 19 July, officers witnessed four masked gang members carry out a burglary at a house in Barnet Gate.

The suspects entered the house while it was empty but fled the scene in a stolen Audi after activating the security alarm.

Half an hour later they attempted to rob the occupants of a car in Thurlow Crescent, Hampstead. The gang used a metal bar in an attempt to smash the car window, but only caused minor damage and no injury to the occupants.

This turned out to be an unmarked police car which was watching and recording the gang’s criminal activities.

As a result, Flying Squad officers and the assisting police helicopter descended on the scene and the four fled in the stolen car.

The Flying Squad officers and a police helicopter followed them to a flat near Gordon House Road.

Police managed to apprehend the four suspects and found three large machetes and zombie knives inside the premises.

All four were arrested for conspiracy to commit burglary and possession with intent to supply and evidence found during this operation led to further arrests and charges.

In one robbery in Finchley, five masked men, one armed with a large knife, forced entry into a gated residential home.

Once inside they forced a locked bedroom door and pushed the 80-year-old female occupant to the floor.

They smashed her wardrobes and demanded to know where the safe was, leaving when they were told there wasn’t one.

During another incident in Golders Green, two suspects forced entry into the home of a mother-of-two using a crowbar.

She hid upstairs, while the suspects stole the keys to a black Audi.

During a further offence in July 2020 in Brondesbury Park, four members of the gang forced their way into an address via a bathroom window.

The occupants awoke to find the masked men in their bedroom.

A member of the gang held a crowbar over the head of the male victim and threatened his wife that he would come to harm if she did not open the safe.

The gang emptied a safe of £93,000 of jewellery and £6,000 cash. When the woman denied having a second safe, a member of the gang threatened to “go and see her daughter” who was sleeping next door.

Detective Sergeant Gary Taylor from the Flying Squad said: “The way this gang targeted their victims and threatened them with weapons during their crime spree was truly shocking and abhorrent.

“The impact these heinous crimes have had on the victims cannot be understated.

“These defendants wrongly thought they wouldn’t be caught.

“However, Flying Squad officers were able to close the net on these robbers and bring them into custody after a proactive surveillance operation.”

Patrick Delaney, 30 was sentenced to a total of 16 years for conspiracy to commit robbery and burglary and attempted robbery.

Martin Delaney, 29, was sentenced to a total of 11 years for attempted robbery and robbery.

Andy Kiasuka-Kiakanda, 26, pleaded guilty at the start of the trial and was sentenced to a total of 14 years for conspiracy to commit robbery and burglary, and a further offence of robbery.

Northover was sentenced to a total of 18 years. He was also sentenced to six years for an attempted robbery of the footballers.

His sentences will run concurrently.