COVID-19: Parks forced to close as sunseekers brawl and leave behind piles of rubbish in ‘appalling scenes’ 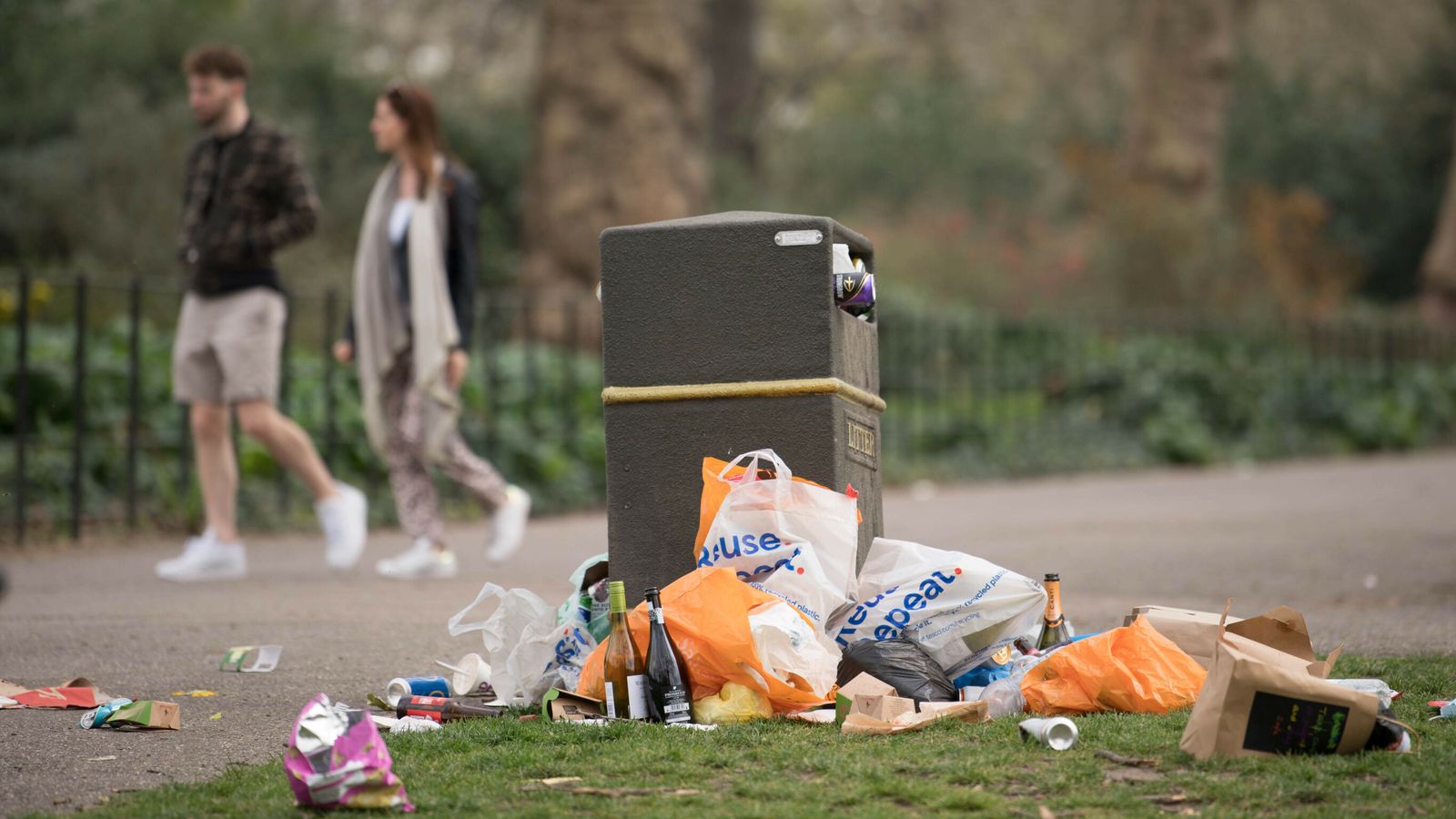 Two parks have been closed following “appalling scenes” as large crowds left piles of litter behind on the hottest March day in more than half a century.

As Britons headed out to enjoy the sunshine on Tuesday, parks and beauty spots around the country saw “disgraceful” amounts of rubbish left in the aftermath.

The Arboretum and Lenton recreation grounds in Nottingham were closed on Wednesday because of the “actions of a thoughtless minority”, council leader David Mellen said.

A dispersal order had to be put in place at the Arboretum as footage posted on social media showed a brawl, dozens of people drinking and some ignoring social distancing rules.

Nottinghamshire Police Assistant Chief Constable Steve Cooper told Nottinghamshire Live: “We are really disappointed by the behaviour we saw there last night. Now is not the time to act like the rules have been totally withdrawn.

“We are near the end and the vast majority of the people there won’t have been vaccinated and they could now end up spreading the virus in the community – that’s what we are trying to stop. It is not stopping people having fun it is the consequences of the virus.”

Mr Hancock wrote in a tweet: “Let’s enjoy the sun but let’s do it safely. We have come so far, don’t blow it now.”

It comes after Prime Minister Boris Johnson said that he hoped people would take advantage of the “beautiful weather” to play sport or exercise as lockdown restrictions were eased on Monday, while also emphasising the country should still “proceed with caution”.

There, the mercury reached 23.9C (75F) during the afternoon.

The UK’s highest March temperature in 53 years was recorded in Kew Gardens, London, on Tuesday afternoon where it reached 24.5C (76.1F), according to the Met Office.

People across England are now allowed to meet in groups of up to six or as two households in parks and gardens, with outdoor team sports also able to resume.

The warm weather saw people flock to the seaside and parks on Tuesday to enjoy the sunshine with family and friends for the first time in months.

Footage and images, including on social media, showed neighbours sharing a drink with one another in gardens, groups picnicking in green spaces, surfers on beaches and children in playgrounds.

Image: A police officer talks to a group of people on Tuesday – the hottest March day in 53 years – following the easing of lockdown restrictions

However, some also showed large numbers congregating, social distancing rules being ignored, people leaving behind huge amounts of rubbish in parks, bonfires left to burn and even a scuffle.

In Cardiff, more than 100 people gathered outside the Welsh Parliament at around 10pm and began pelting police with bottles when they arrived to disperse the crowd.

Three police officers suffered minor injuries and two males – a 21-year-old and a 16-year-old – were arrested on suspicion of public order offences.

Meanwhile, TV favourite Robert Rinder – known for the show Judge Rinder – shared an image of piles of rubbish left in Primrose Hill, north London, and the cleaner who will have to deal with it all.

“Leaving your rubbish for others to pick up is halitosis of the human soul,” he said.

This man didn’t think he was special. He told me he was from Romania but didn’t want any praise: ‘it’s just my job.’

His Job? Primrose Hill this morning cleaning up a sea of debris.

Leaving your rubbish for others to pick up is halitosis of the human soul. pic.twitter.com/E0audBSQ4W

Hundreds of people also descended on Platt Fields Park in Fallowfield, Manchester, with one resident telling the Manchester Evening News: “The rule of six has gone out the window.”

However, this week’s blue skies and sunny climate are not expected to last.

Temperatures are expected to drop in the east of England from Thursday, and only “scraping into double figures”, Mr Burkhill said.

Wet weather is forecast for Easter Sunday, with the chance of sleet or snow in Scotland and the far north of England.