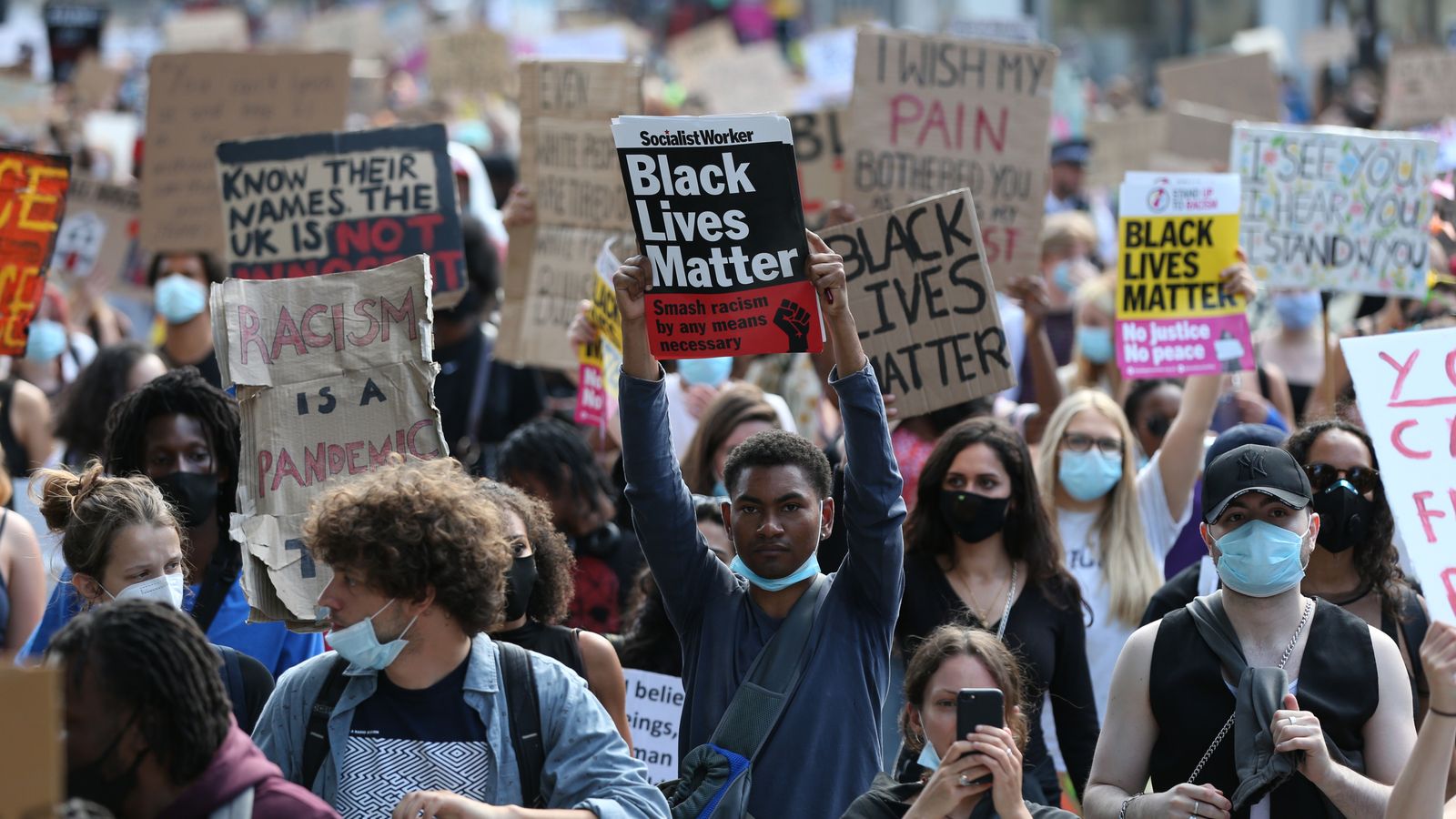 The UK is no longer a country “where the system is deliberately rigged against ethnic minorities”, a government-ordered review has argued.

The Commission on Race and Ethnic Disparities – which was appointed by Prime Minister Boris Johnson following last summer’s Black Lives Matter protests – has published its 258-page report on inequality in Britain.

It explored ethnic and race disparities within education, employment, the criminal justice system and health.

‘It’s taking us back in the argument’

Mr Johnson described its report as an “important piece of work”, adding: “It is now right that the government considers their recommendations in detail, and assesses the implications for future government policy.

“The entirety of government remains fully committed to building a fairer Britain and taking the action needed to address disparities wherever they exist.”

But there has been criticism of the report, with Labour dismissing it as a “divisive polemic which cherry picks statistics”.

“To downplay institutional racism in a pandemic where Black, Asian and ethnic minority people have died disproportionately and are now twice as likely to be unemployed is an insult,” shadow women and equalities secretary Marsha de Cordova said.

“The government must urgently explain how they came to publish content which glorifies the slave trade and immediately disassociate themselves from these remarks.”

Labour MP Diane Abbott told Sky News it was “more about politics than the policy” and “taking us back in the argument for racial justice, not taking us forward”.

Report from a ‘backdrop of human experiences’

“Tired of the endless debate about whether structural racism exists with little desire to actually address it.”

In its report, the commission said the UK “should be regarded as a model for other white-majority countries” although it cannot be considered “a post racial society”.

“Overt and outright racism persists in the UK”, particularly online, the report found, adding that it remained a “real force” and should be taken “seriously”.

But it also said: “Too often ‘racism’ is the catch-all explanation, and can be simply implicitly accepted rather than explicitly examined.

“The evidence shows that geography, family influence, socio-economic background, culture and religion have more significant impact on life chances than the existence of racism.”

‘We shouldn’t rush to racism as the answer’

The report argues there is an “increasingly strident form of anti-racism thinking that seeks to explain all minority disadvantage through the prism of white discrimination”, which diverts attention away from other factors behind disparities of outcome.

It criticised what it said was the “confusing” way the term “institutional racism” has been applied, arguing it should only be used when there is proven deep-seated, systemic racism present and not as a “catch-all” term for any microaggression.

The report makes a total of 24 recommendations to the government in order to give a “further burst of momentum” in the UK’s progress towards becoming a “successful multicultural community”, including:

• The phasing in of extended school days, starting with disadvantaged areas, as part of a “bold intervention” into education following the impact of the COVID pandemic on pupils
• Access to better quality careers advice in schools for children from disadvantaged backgrounds, funded by university outreach programmes
• The commissioning of further research into the drivers in “high performing pupils’ communities” to see what can be replicated to support all children to succeed
• For organisations “to move away from funding unconscious bias training” and the government “to work with a panel of academics and practitioners to develop resources and evidence-based approaches of what does work to advance fairness in the workplace”
• Ditching the BAME (Black, Asian and Minority Ethnic) acronym

One of its major conclusions is that issues around race and racism are becoming less important and, in some cases, are not a significant factor in explaining disparities.

Race review: ‘There’s a lot of work ahead’

It found that children from many ethnic communities do at least as well or substantially better than white pupils in education.

This high achievement for children from certain ethnic communities is creating fairer and more diverse workplaces, the commission added.

Its report said some communities continue to be “haunted” by “historic cases” of racism, creating “deep mistrust” in the system which could prove a barrier to success.

But the commission claimed that there was a “reluctance to acknowledge that the UK had become open and fairer” from some groups.

It was also suggested that the well-meaning “idealism” of many young people who claim the country is still institutionally racist is not borne out by the evidence.

‘History must be acknowledged to make progress’

The report acknowledged that the Black Lives Matter demonstrations had focused attention on race, but said progress could not be achieved by “cleaving to a fatalistic account that insists nothing has changed”.

It added: “We also have to ask whether a narrative that claims nothing has changed for the better, and that the dominant feature of our society is institutional racism and white privilege, will achieve anything beyond alienating the decent centre ground – a centre ground which is occupied by people of all races and ethnicities.

“We therefore cannot accept the accusatory tone of much of the current rhetoric on race, and the pessimism about what has been and what more can be achieved.”

According to the commission, using phrases like “white privilege” and “white fragility” are “counterproductive and divisive” and “fails to identify the real causes for disparities”.

Addressing calls for the curriculum in British schools to be “decolonised”, the commission said “neither the banning of white authors or token expressions of black achievement will help to broaden young minds”.

“We have argued against bringing down statues, instead, we want all children to reclaim their British heritage. We want to create a teaching resource that looks at the influence of the UK, particularly during the Empire period.”

It added: “There is a new story about the Caribbean experience which speaks to the slave period not only being about profit and suffering but how culturally African people transformed themselves into a re-modelled African/Britain.”

Ms de Cordova highlighted this particular passage on her Twitter account, writing: “Putting a positive spin on slavery and empire. Published on a government website in 2021.

Liberal Democrat MP Wera Hobhouse, the party’s spokesperson for equalities, said there is “still so much to do to tackle racial injustice in our country”, adding: “Conservative ministers must not use this report as an excuse to continue their shameful inaction.”

COVID-19: Parks forced to close as sunseekers brawl and leave behind piles of rubbish in ‘appalling scenes’