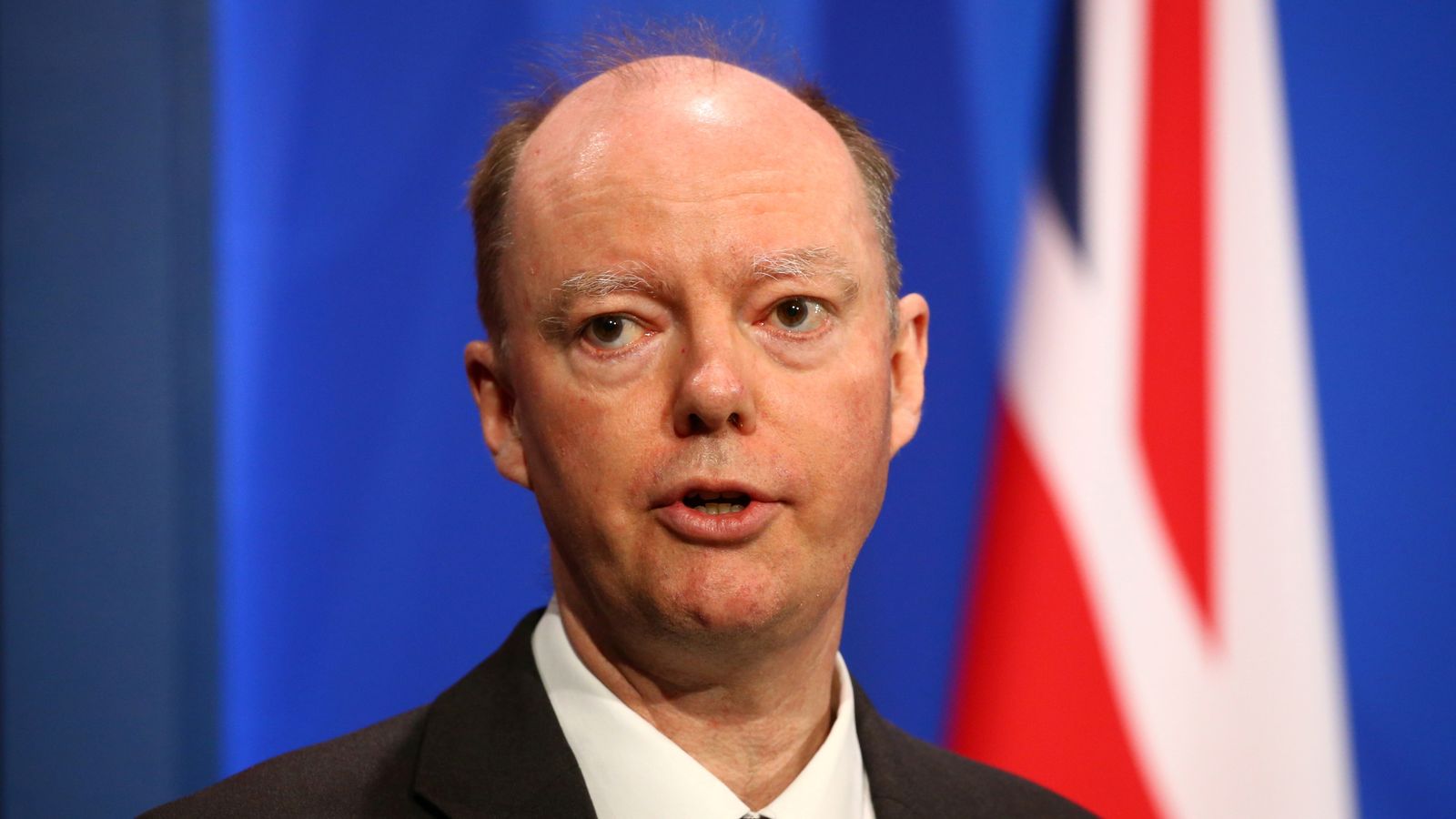 Coronavirus safety measures are likely to still be necessary for another two years, England’s chief medical officer has said.

Professor Chris Whitty said it could take up to two years for the world to build up a bank of vaccines and technologies capable of rapidly dealing with COVID-19 variants and outbreaks.

While he said these tools will eventually “find a way through”, there still remains a level of risk that needs to be managed before then.

Speaking during a Royal Society of Medicine webinar on Thursday, Professor Whitty said a cautious approach will be needed for the next couple of years “because we’ve got such a difficult situation to go through at the moment”.

He added: “What we don’t want to be is in a situation where we look back in six months and say ‘If we’d only just been a bit more cautious for a month or two we would’ve actually got through [vaccinating] the whole population, we’d have understood a lot more, we’d know how to deal with this, we’d probably have a few variant vaccines on the stocks’.

“I don’t think though this should be seen as an indefinite posture, I think this is a matter of probably the next year or two whilst we understand how to do this and find a way of responding rapidly to variants.”

However, he said a “very wide portfolio of vaccines” is likely to be available in around two years, offering greater protection.

“If we scroll forward two years, I think we’re going to have a very wide portfolio of vaccines,” Professor Whitty said.

He added that technology can “turn around a vaccine to a new variant incredibly fast, compared to how historically we’ve been able to do it”.

“So I think technology will find a way through this in the long run, but we’ve got a period of risk between now and then,” he added.

Professor Whitty said that while the R number (the rate at which the virus replicated) is less than 1, variants coming into the UK “don’t have much of a foothold”, but he added that R is anticipated to rise above 1 as more things open up in the lockdown exit road map.

Politicians and experts have issued warnings to the public to stick to coronavirus rules, after the stay at home order was lifted in England on Monday and the “rule of six” came back into place for outside gatherings.

On Monday, Boris Johnson warned people to “proceed with caution”.

“What we don’t know is exactly how strong our fortifications now are, how robust our defences are against another wave,” he said.

“That’s why I stress the importance of everybody maintaining the discipline people have shown for so long.”

It comes as a survey from the Office for National Statistics (ONS) showed the level of people testing positive for COVID-19 in England has fallen to its lowest level since 24 September.

Around one in 370 people in private households in England had COVID-19 in the week to 27 March – down slightly from one in 340 the previous week, the ONS said. In the week to 24 September the estimate stood at one in 470.

However, the ONS said the percentage of people testing positive for the virus is estimated to have increased in eastern England.

The trend was uncertain for all other regions, but had decreased in southeast and southwest England, the ONS added.

Yorkshire and the Humber had the highest proportion of people of any region in England likely to test positive for coronavirus in the week to March 27: around one in 230.

Northwest England had the next highest estimate at one in 280.

Meanwhile, England’s deputy chief medical officer has said the UK was not fully prepared for a pandemic of this type.

Image: Jenny Harries said the UK wasn’t ‘fully prepared’ for a pandemic of this type

Dr Jenny Harries said more testing would have been carried out if tests were available earlier on, and knowledge about asymptomatic transmission could have resulted in a prompt recommendation to wear masks.

Speaking at the launch of the new UK Health Security Agency (UKHSA), of which she is chief executive, Dr Harries told BBC Radio 4’s Today programme: “We were not fully prepared for this pandemic and, as I’ve said, I’m very happy to accept there is an awful lot to learn.

“I think we share some of those failings with many other countries.”

Asked if the initial response to the pandemic was poor, she said: “I think it had merits and it had things that we would wish to improve.”

She said that while asymptomatic transmission had been “considered carefully”, the proportion of cases – now thought to be 30% – was not recognised.

“So obviously the response that we put in place and some of the interventions were not accounting for that high degree of numbers of asymptomatic cases, so I think there’s learning as we’ve gone through.”

Richard Okorogheye: Mother of missing student says ‘someone was waiting for him’