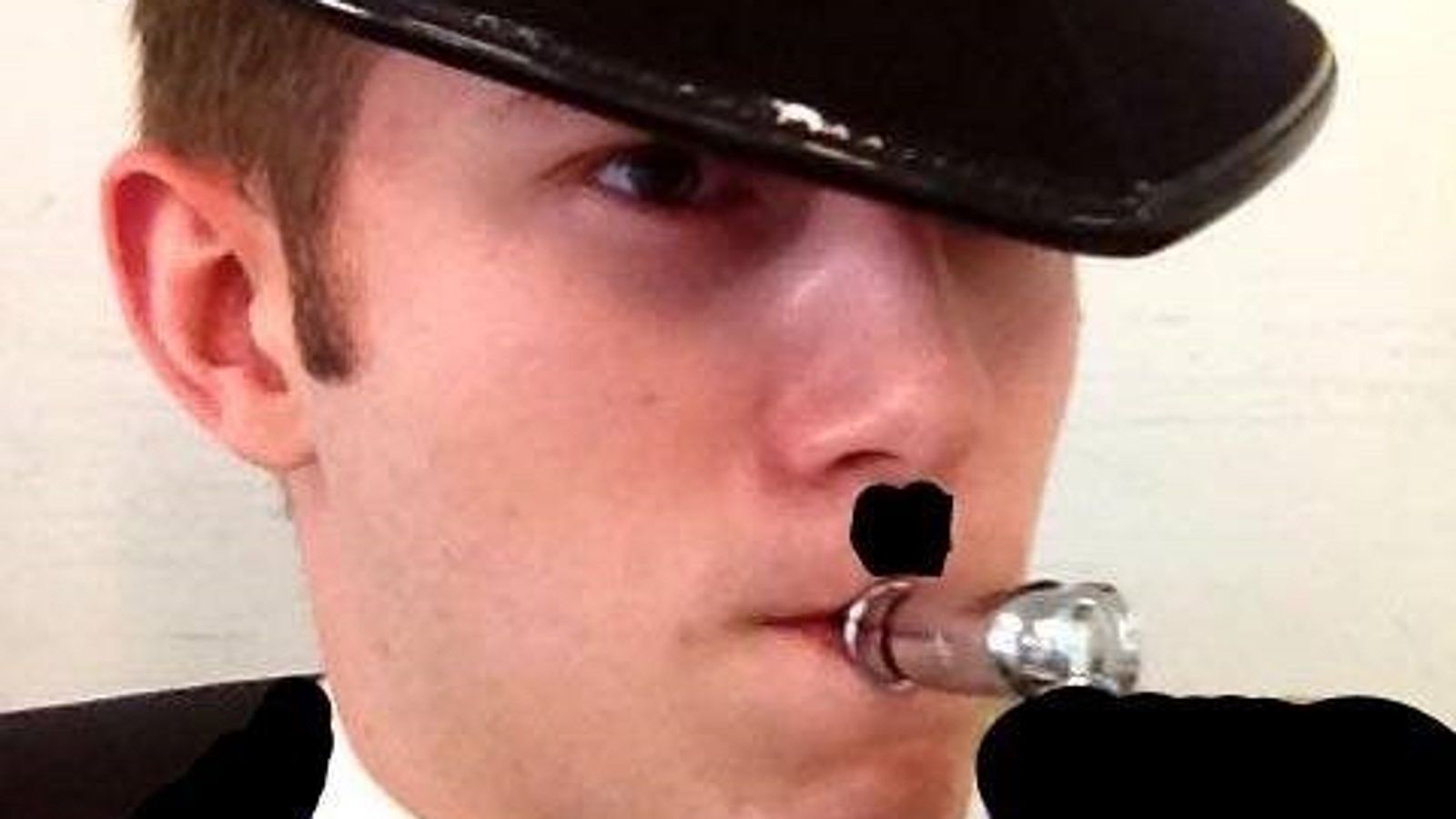 A Metropolitan Police officer is facing jail after acting as a recruiter for a banned neo-Nazi terrorist group.

PC Benjamin Hannam, from Edmonton in north London, is the first police officer to be convicted of involvement in far-right terrorism.

The 22-year-old was found guilty by an Old Bailey jury of being a member of National Action, a proscribed terrorist organisation, along with two counts of possessing documents useful for terrorism and for fraud.

After the police constable’s arrest in March last year, detectives found an image on his iPhone showing him in police uniform, with a Hitler-style moustache superimposed on his face and a Nazi badge on his lapel.

Image: Hannam pictured with a Hitler-style moustache superimposed on his face

They also found he had downloaded a knife-fighting manual and a copy of the “manifesto” of the right-wing extremist Anders Breivik, who murdered 77 people, mostly children, in bomb and gun attacks in Norway in 2011.

PC Hannam, who worked with the emergency response team in Haringey, north London, joined the Met in March 2018.

National Action was proscribed by the government as a terrorist group on 16 December 2016.

But the Old Bailey heard how a month later, on 15 January 2017, Hannam travelled to Swindon to meet other members of the group.

He attended a number of meetings with group members in the months after – and participated in a filming session for a video promoting an off-shoot of National Action called NS131.

The court was shown videos of Hannam in physical activity sessions, including boxing, with members of the group in woodland.

Further videos showed Hannam and others in the group in Swindon, painting graffiti of the NS131 logo on walls at two locations around the town.

Those activities took place just weeks before he applied to join the Metropolitan Police in July 2017.

Hannam told the court his interest in fascism started because he liked the “bold look” of Nazi propaganda posters.

He said he suffered from autism, which made him obsessive about downloading material.

When police searched his bedroom after his arrest they found a number of Nazi propaganda posters on his bedroom wall.

His school had raised concerns internally over his extremist views after comments about immigration during a debate on Brexit and an A-level project on extremist ideology, which teachers said they were unable to submit because of the content.

The Metropolitan Police confirmed that no school reference was sought during Benjamin Hannam’s application and vetting process.

As part of that process, he was asked if he had ever been a member of the British National Party “or a similar organisation, whose constitution, aims, objectives, or pronouncements may contradict police officers’ duty to promote race equality”.

In answering no, he was said to have defrauded the police out of the £66,000 they spent employing him between 26 March 2018, when he started as a trainee, and his arrest in March 2020.

Commander Richard Smith, head of Scotland Yard’s Counter-Terrorism Command, said: “Obviously there will be some concern that somebody who was a member of a group like National Action was able to become a member of Metropolitan Police Service but once we had identified that fact we acted very swiftly.

“Clearly having a mindset of that type is completely incompatible with being a police officer.

“We are highly concerned that we have a serving police officer who has previously been a member of a proscribed organisation such as National Action and we have followed every line of inquiry as you would expect us to do so.”

The young officer’s activity was discovered when an anonymous hacker using the name “antifa-data” (anti-fascist data) hacked into a neo-Nazi forum called Iron March and published details of its 1,185 users online.

A judge had previously ruled Hannam’s trial could not be reported because he was also facing charges of possessing prohibited images of underage girls.

But after he pleaded guilty to the charges towards the end of this trial, his links to far-right terrorism can now be reported.

After his arrest, PC Hannam’s stop and search records, crime reports and case files were all the subject of a detailed review by the Metropolitan Police.

The force said that review found that there was “no evidence that Constable Hannam targeted individuals as a result of any right-wing views”.

COVID-19: 1.1 million in the UK recently reported having long COVID