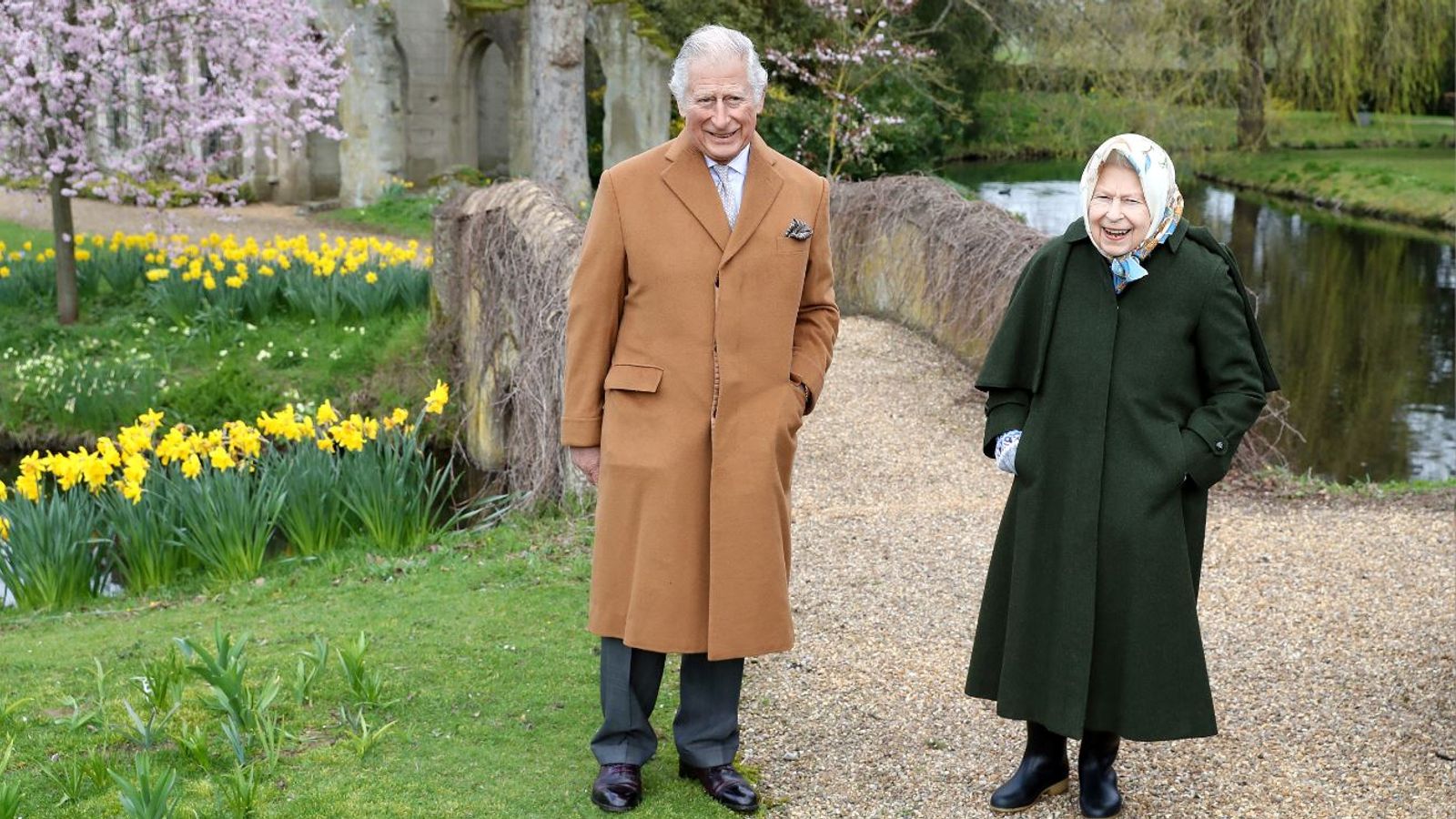 The Queen and Prince Charles have been pictured enjoying a walk together in Windsor ahead of Easter.

The 94-year-old monarch and her eldest son spent some quality time together as they strolled among the daffodils and cherry blossom in the garden of Frogmore House – a royal residence around half a mile south of Windsor Castle.

Photos of the pair were taken on 23 March – a week after Prince Philip returned to the castle from spending a month in hospital – but were only released on Good Friday.

Image: The pair were wrapped up in warm coats for their stroll

The Queen and Charles, both wrapped up in coats, were pictured smiling and laughing as they crossed a picturesque small bridge over a stream in the gardens.

The monarch was last seen on Wednesday when she gave her first in-person public appearance of the year to mark the centenary of the Royal Australian Air Force (RAAF) in Runnymede, Surrey.

She has been carrying out her engagements via video link since the third lockdown was imposed at the start of the year, and has rarely left the grounds of Windsor Castle since the outbreak of the COVID-19 pandemic last year.

His narration of the Hopkins poem God’s Grandeur will be played during a virtual service on Sunday morning at Stonyhurst College, a Catholic boarding school in Lancashire where the Victorian cleric taught.

Clarence House said in a statement: “The Prince of Wales has recorded the Gerard Manley Hopkins Poem, God’s Grandeur, to show support for Christians around the world at Easter.

“Easter is the most important festival of the Christian Church, celebrating the resurrection of Jesus Christ on the third day after his crucifixion, and Hopkins’s poem captures the hope and joy associated with that season.”

Image: The Queen made her first public engagement this year outside Windsor grounds on Wednesday

The poem begins with the lines: “The world is charged with the grandeur of God.

“It will flame out, like shining from shook foil; It gathers to a greatness, like the ooze of oil Crushed.”

Hopkins gave up writing poetry after deciding to become a priest but later took it up again to write a long poem in memory of five nuns who died in a shipwreck.

His poems were not published in full until 1918, almost 30 years after his death, and his use of language, new rhythmic effects and unusual word combinations influenced the later greats including Dylan Thomas and WH Auden.