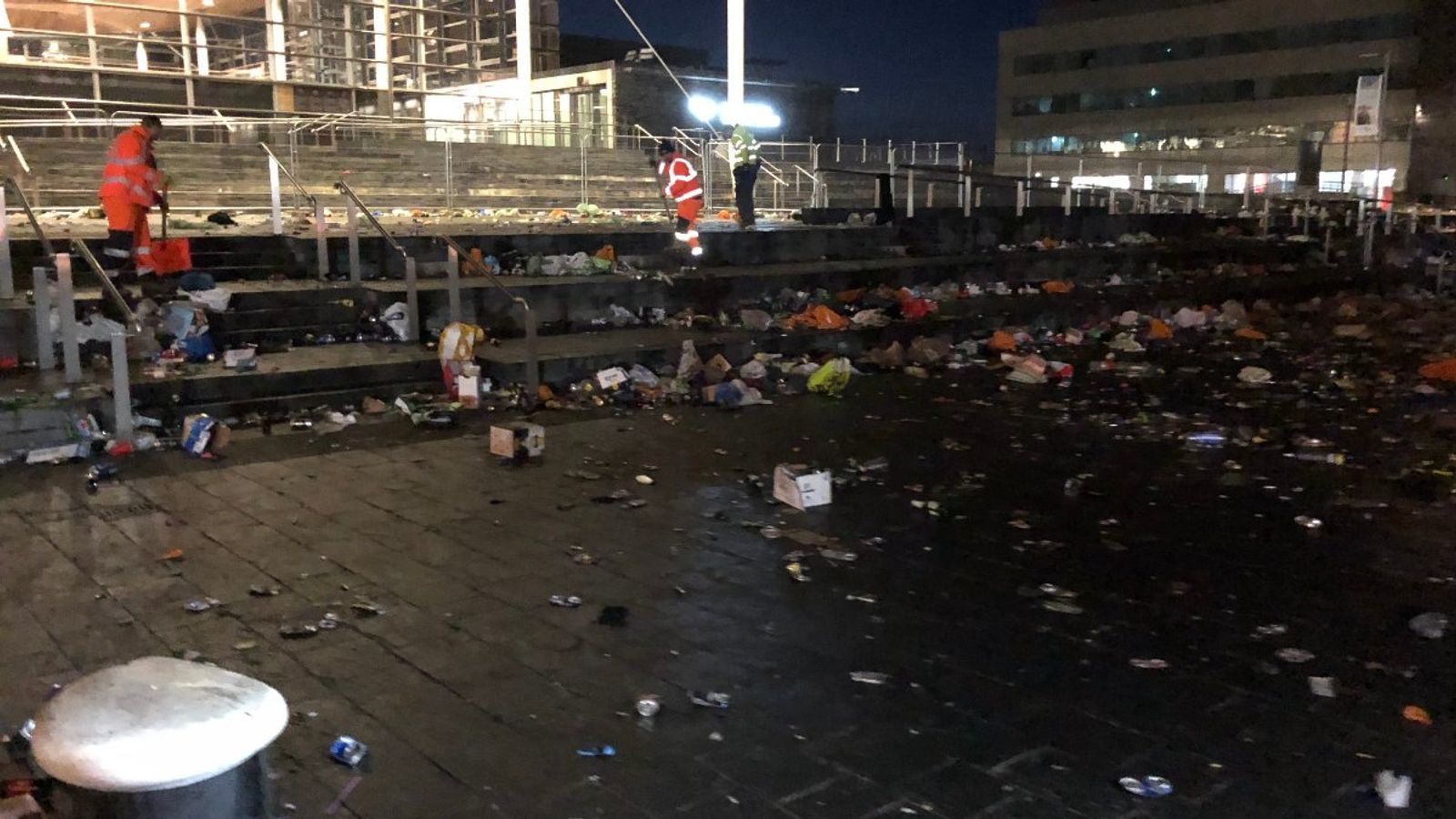 People who left litter strewn across Cardiff Bay have been condemned for breaking coronavirus regulations.

Wales is currently under rule-of-six COVID restrictions, meaning that only half a dozen people can meet outdoors with social distancing.

But Good Friday saw a large number of people gather at the waterfront, with pictures showing beer cans and other rubbish left behind.

Earlier in the week, there were similar scenes outside of the Senedd, the seat of the Welsh government. Three police officers were injured after bottles were thrown during this gathering.

Speaking of the events on the bank holiday, a Cardiff Council spokesman said: “Once again our teams have been faced with the huge task of cleaning up a significant amount of rubbish left behind by large groups of people intent on breaking COVID-19 restrictions.

“Last night, bins were left unused and the ground was littered with rubbish. Council staff have been on site since the early hours of the morning, working hard to clear and clean the area.

“Despite the preventative measures put in place by the council, in partnership with South Wales Police, the Welsh government’s coronavirus regulations were again broken by a significant number of people illegally gathering in Cardiff Bay.

“Breaking these rules significantly increases the chances of COVID-19 cases rising in the city. We urge everyone to follow the advice, maintain social distance, and to keep Cardiff safe.”

Superintendent Marc Attwell said: “As restrictions have eased, the need for personal responsibility is critical and it is extremely disappointing that a small minority are willing to put themselves, and others, in harm’s way.

“Cardiff Bay in particular has attracted large crowds over the past few days. The behaviour seen over the past three days has placed additional pressure on not only the police but the local authority as well, and meant that officers have been diverted from other parts of the force.

“The practicalities of policing such large gatherings is incredibly difficult and we do still have emergency calls to attend.”

Earlier this week, Welsh First Minister Mark Drakeford told Sky News: “The level of coronavirus in Wales is the lowest in the United Kingdom and the rates of vaccination are the highest.

“All of that means that the virus, at the moment, is in a relatively benign position.”

Welsh Conservatives have called for the reopening of outdoor hospitality before the planned date of 26 April to combat large gatherings.

Under the Welsh government’s plan for easing restrictions:

From 12 April:
• All pupils in Wales will return to schools for face-to-face education, all post-16 students will return to further education and training centres and university campuses will be able to open for a mixture of face-to-face and online learning for all students
• All remaining shops can reopen
• All remaining close-contact services can resume, including mobile services
• Travel into and out of Wales from the rest of the UK and the Common Travel Area will be allowed
• Viewings at wedding venues can resume by appointment
• Outdoor canvassing for elections can begin.

The Welsh government is also planning further easing of lockdown rules in April and May, but warned these will only happen “should public health conditions remain favourable”.

• Outdoor attractions, including funfairs and theme parks, will reopen
• Outdoor hospitality can resume, including at cafes, pubs and restaurants

• Wedding receptions with up to 30 people can take place outdoors..

• Gyms, leisure centres and fitness facilities can reopen. This will include individual or one-to-one training but not exercise classes
• Two households will be able to meet indoors.

However, this step will have to be signed off by the new Welsh government, following elections on 6 May, along with the possible reopening of indoor hospitality ahead of the bank holiday at the end of May.