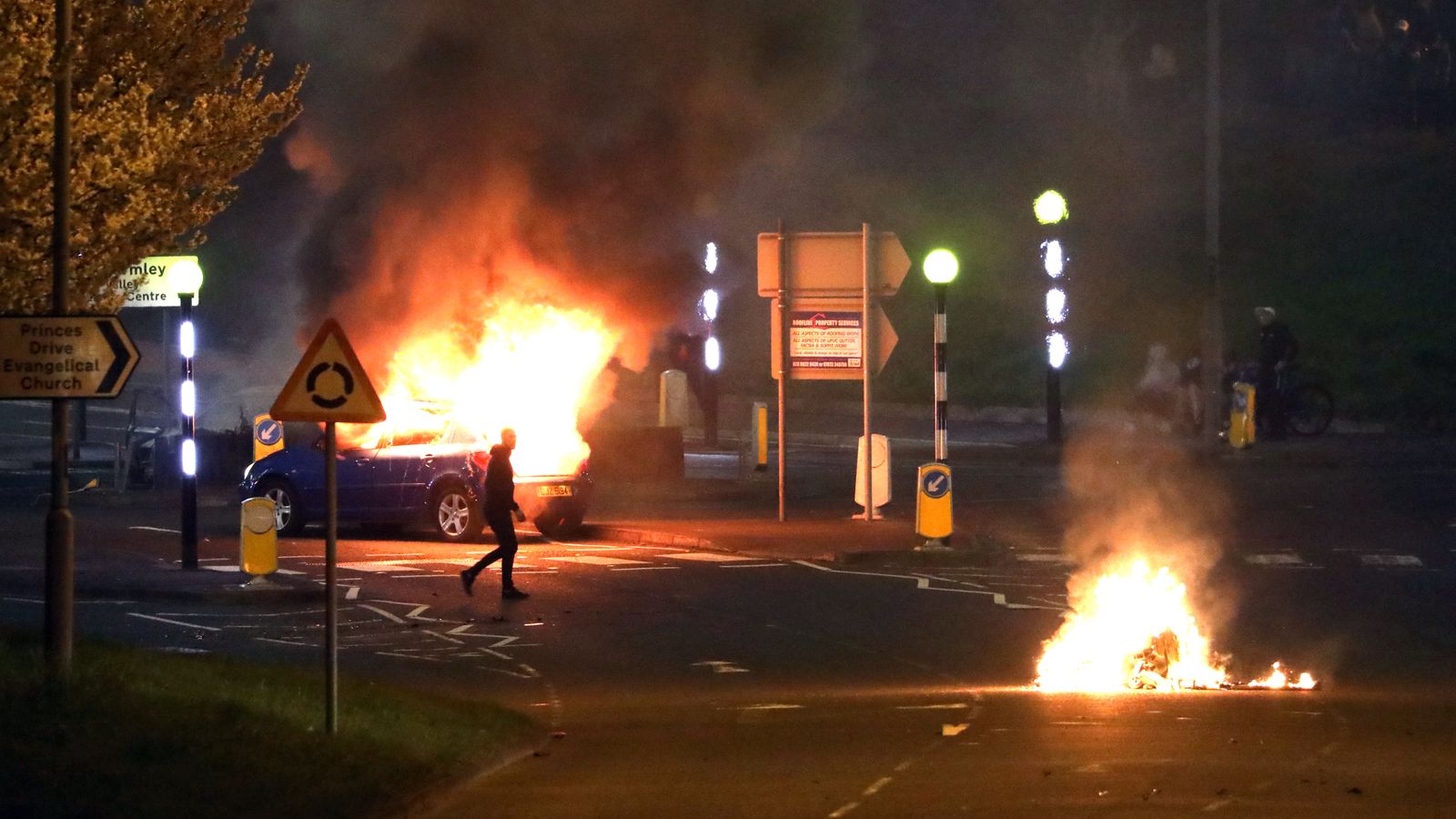 Disturbances have broken out in Newtownabbey fuelling fears of another night of trouble ahead in Northern Ireland.

Three cars were hijacked and set on fire in the loyalist O’Neill/Doagh Road area of Newtownabbey, on the outskirts of Belfast, on Saturday evening.

A large crowd of onlookers gathered to watch the unrest unfold at the Cloughfern roundabout. Video footage showed cars being burned and a police van being targeted.

Image: Trouble broke out at the Cloughfern roundabout

The Police Federation for Northern Ireland has called for an end of the violence, saying people destroying their own communities is “not the way to protest or vent”.

It comes after eight people were arrested and 27 police officers injured during riots in Belfast and Londonderry on Friday night.

Fifteen officers were injured in Belfast after coming under attack while policing a small protest in the loyalist Sandy Row area of the city. There were up to 300 people of all ages on the streets.

Two boys, 13 and 14, were among eight people arrested.

“I think it’s a tragedy that any child in Northern Ireland is sitting in a custody suite this morning and facing criminal investigation, possibility of being charged and possibility of facing a criminal conviction,” Chief Superintendent Walls said.

“It shouldn’t happen. And that’s why I’m very keen that people with influence try to ask anyone intent on violence to please step back. It’s not the way to resolve tensions or arguments.”

Image: Rioters clash with police in the Sandy Row area of Belfast

Seven people including three teenage boys have been charged with riot, police said.

Three teenagers, aged 17, 14 and 13, are due to appear at Belfast Youth Court on the same date.

Another 12 officers were hurt in Derry after being targeted by mainly young people.

“On their arrival, they came under sustained attack from a large group of youths and young adults throwing masonry, bottles, petrol bombs and fireworks,” he said.

“As a result 12 officers sustained injuries including head, leg and foot wounds.”

Image: Simon Walls called on those with influence to dissuade young people from violence

Mr Jones also said a care home was damaged in the Nelson Drive area during the trouble causing “untold fear and distress” to residents.

He said it was “totally unacceptable” that Friday was the fifth successive night of disturbances in the unionist Waterside area of the city.

“It is vital that we all send out a message to those responsible that such behaviour will not be tolerated,” he said.

“The people of Derry/Londonderry deserve to feel safe within their own homes and be able to walk the streets without fear.

“I would ask that anyone who has any influence in communities – whether parents, guardians, community or elected representatives – please, use that influence to ensure young people do not get caught up in criminality and that they are kept safe and away from harm.”

Political leaders have also called for calm over the Easter weekend following the riots.

Tension over the UK-EU Brexit deal’s Northern Ireland Protocol, the establishment of a border in the Irish Sea, has been simmering in the loyalist community for months.

Image: Seven people have been charged following the incident at Sandy Row

But this week’s decision by public prosecutors not to charge anyone with alleged breaches of COVID regulations at an IRA funeral sparked Unionist outrage.

The DUP leader said: “I know that many of our young people are hugely frustrated by the events of this last week but causing injury to police officers will not make things better.

“And I send my strong support to all of the rank-and-file police officers that are on duty over this Easter weekend.

“I appeal to our young people not to get drawn into disorder which will lead to them having criminal convictions and blighting their own lives.

“I also ask parents to play their part and be proactive in protecting their young adults.”

Mr Lewis said: “Violence is never the answer. There is no place for it in society.

“It is unwanted, unwarranted and I fully support the PSNI appeal for calm.”

Last month, Sinn Fein condemned officers for their handling of a memorial service for victims of a loyalist gun attack.

Now Unionists are calling on the chief constable to resign over the handling of an IRA funeral in west Belfast.

For some in the loyalist community, where there is already tension over the Brexit Protocol, it was a tipping point.

But how many young people are going to end up with criminal records for rioting before communities find better ways to express frustrations?

Two decades after the historic compromise, that says more about the politics of this place than it says about policing.