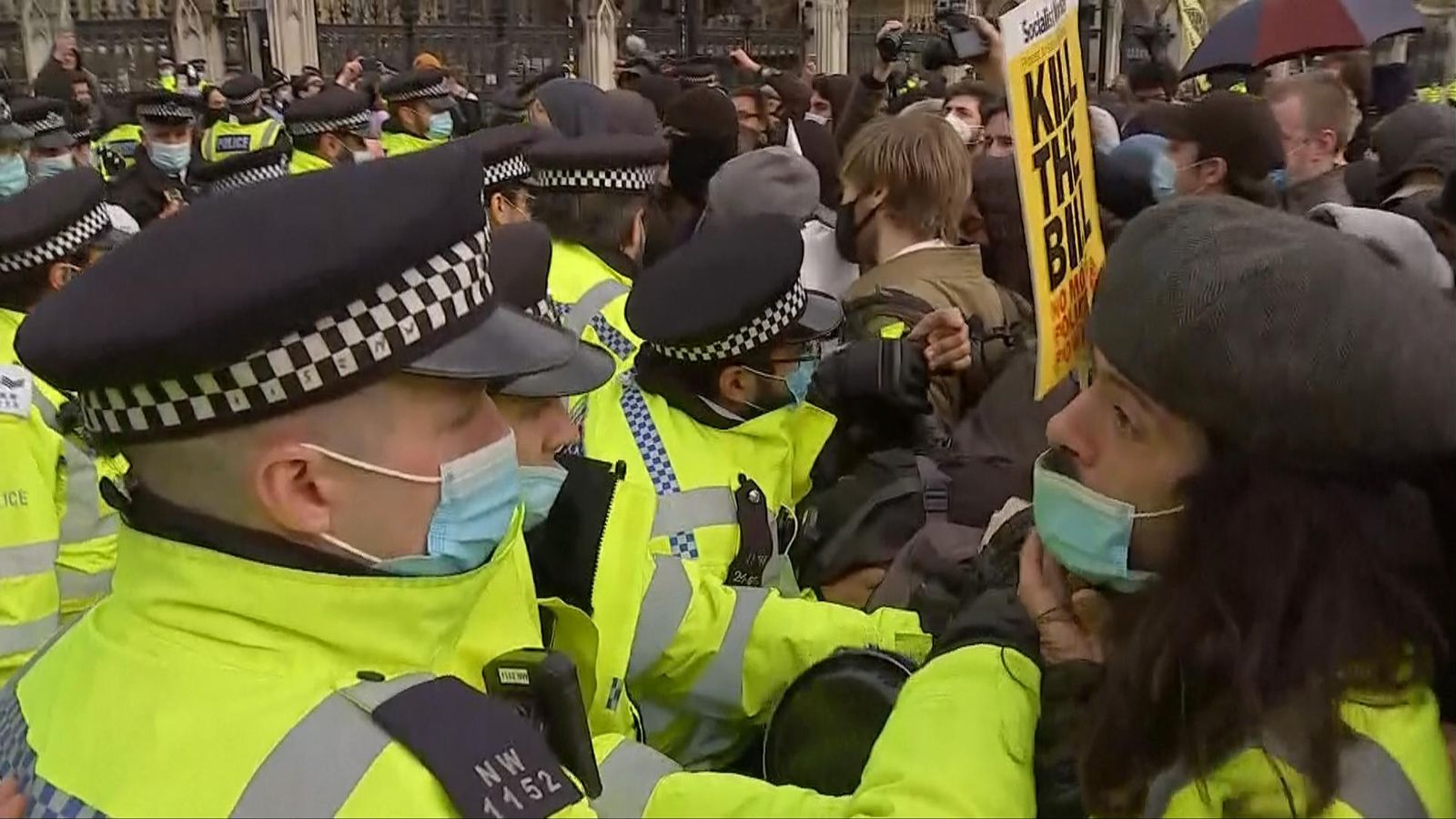 Twenty-six people have been arrested after clashes between police and demonstrators at a “Kill the Bill” protest in central London, during which 10 officers were injured.

Projectiles were thrown as police pushed protesters away, and dozens of extra officers were brought in to help unblock the road for a McDonald’s lorry held up outside parliament.

The Metropolitan Police said the number of arrests could yet increase, with the operation having seen 10 officers suffer non-serious injuries.

Commander Ade Adelekan, who led the policing operation, said: “The vast majority of people who turned out in central London today did so while adhering to social distancing. They engaged with my officers when required and left when asked – I would like to thank them for doing so.

“However, a small minority did not engage despite the repeated efforts of officers on the ground. This left us with no option but to move to an enforcement stage and arrests have been made.

“This has been another challenging day for officers on the ground and I want to thank them for their efforts throughout the course of today.

“We remain in the middle of a global pandemic and we have made great progress in controlling the spread of the virus; we will not allow the selfish actions of a small number of people to put Londoners progress in jeopardy.”

More from Kill The Bill Protests

Organisers had reminded demonstrators to stay socially distanced as crowds grew to more than 300, and speeches were made opposite the Houses of Parliament.

Several women addressed the crowd and shared personal experiences of suffering abuse, while many others carried anti-sexism placards and chanted “women scared everywhere, police and government do not care”.

Image: Ten officers were injured in the scuffles

The heated scenes in Parliament Square came amid otherwise peaceful demonstrations across the country over the proposed crime legislation, which opponents fear will limit their right to protest.

Saturday has seen protests not just in the capital, but also in Newcastle, Birmingham, Liverpool, Bristol and Brighton, despite ongoing lockdown restrictions.

More than 1,000 people gathered in Bristol for what was the fifth Kill the Bill demonstration in the city centre in the last two weeks.

Yesterday, Ryan Paul Roberts, 25, was charged with attempted arson with intent to endanger life after an enflamed item was placed under an occupied police van outside Bristol’s Bridewell Police Station during a protest on 21 March.

In Manchester, people were seen sitting on tram tracks before police moved in.

Greater Manchester Police had previously issued a 48-hour dispersal notice for those engaging in anti-social behaviour.

The protestors have been demonstrating against proposed changes to the Police, Crime, Sentencing and Courts Bill.

The changes would give police in England and Wales more power to impose conditions on non-violent protests, including for being too noisy or a nuisance, with fines or jail terms for those convicted.

He described the bill as a “very dangerous, slippery slope” and defended the right to protest.

“If we don’t protest, things don’t change,” he said, which drew cheers and applause from the crowd.

Race report critics ‘insulting’ and taking it out of context, author says