COVID-19: How do lateral flow tests work and how will England’s twice-weekly programme take place? 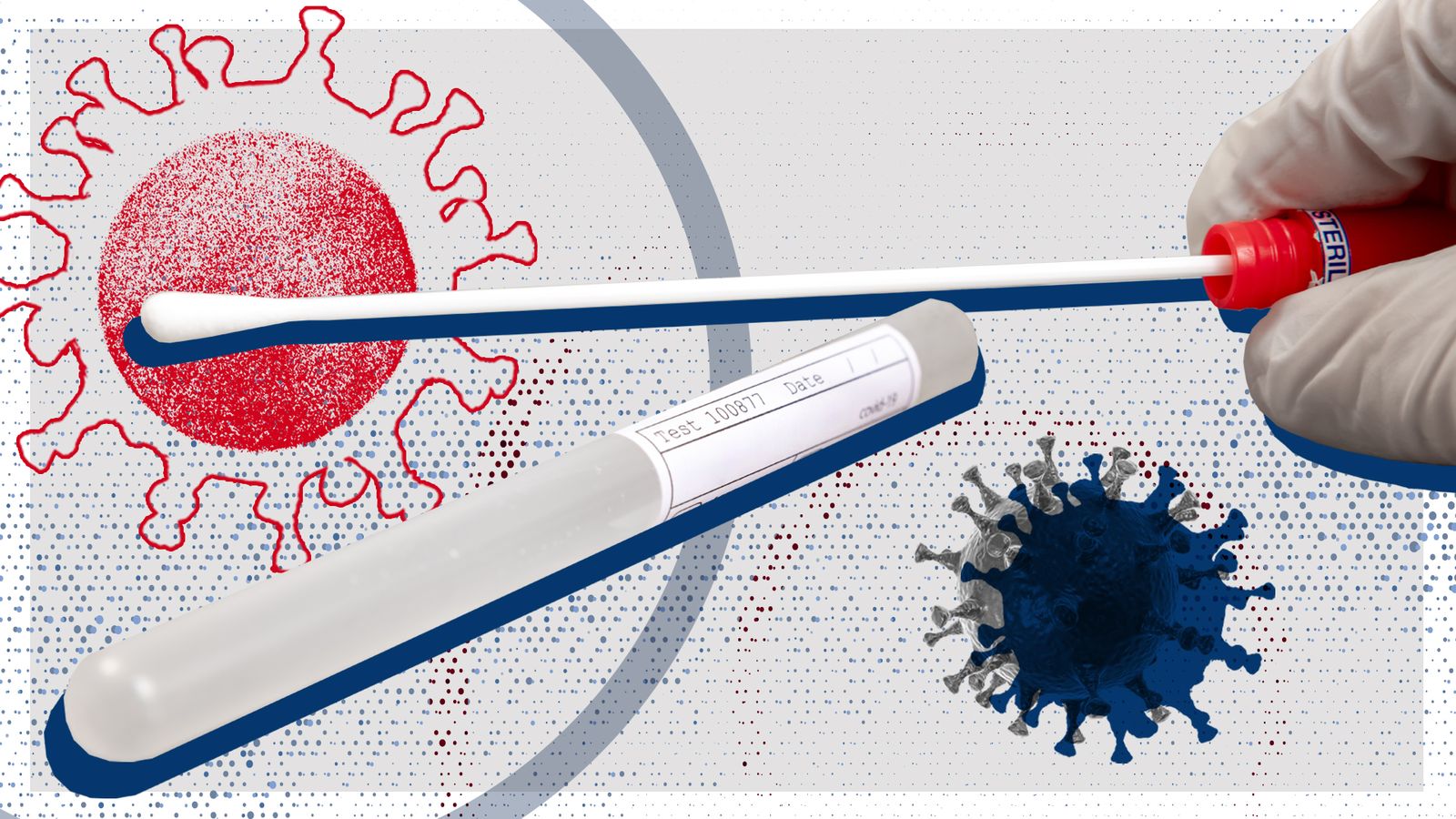 Everyone in England is being urged to take two rapid COVID-19 tests a week to prevent spreading the virus.

The government said lateral flow tests will be used and the twice-weekly programme will begin this Friday to help prevent COVID-19 outbreaks.

Only people in England will be able to get the tests, with devolved governments in Northern Ireland, Scotland and Wales to make their own decisions on mass-testing.

Sky News looks at how the frequent testing will work.

What are lateral flow tests?

The government wants lateral flow tests to be used to identify asymptomatic people, as one in three people with COVID-19 has no symptoms.

They use similar technology to a pregnancy test and can produce a result within about 30 minutes.

Lateral flow tests are a type of antigen testing, where they look for antigens – proteins on the surface of the virus to detect if a person has COVID-19.

No laboratory equipment is needed, meaning they can be done quicker and more easily than PCR tests.

How is a lateral flow test taken?

Blow your nose and wash your hands.

Open the swab packaging and put the fabric end into one nostril about 1.5cm in and roll it about 10 times slowly, then do the same with the other nostril.

Some tests will be for throats so swab your tonsils, or where they were, four times on each side

Open the packet of liquid and squeeze it into the small vial.

Put the swab, fabric end down, into the bottom of the tube of liquid provided and press the swab head against the edge of the tube while rotating the swab for about 10 seconds to squeeze as much fluid out as possible.

This extracts the molecule that determines if COVID-19 is present.

Take the swab out and dispose of it then press the provided nozzle cap tightly on to the tube and turn it upside down before lightly squeezing two drops onto the specimen strip.

Place the strip on a flat surface for 30 minutes and your results will then appear.

You must then report your test result on gov.uk/report-covid19-result and if you test positive then you must start self-isolating immediately and book a confirmatory PCR test.

How will people in England be able to get the tests?

Tests will be available through:

• A home ordering service, which allows people to order lateral flow tests online to be delivered to their home

• Testing on-site at schools and colleges

• “Pharmacy Collect” will begin, in which people over 18 without symptoms will be able to visit a participating local pharmacy and collect a box of seven rapid tests to use twice a week at home.

Some scientists are concerned these rapid tests are not as effective as PCR tests, especially when people are doing them at home instead of a health professional taking the swab.

Sian Taylor-Phillips, professor of population health at the University of Warwick, told Sky News: “We don’t know how well lateral flow tests work in terms of accuracy in people’s homes.

“So when people are doing the test unsupervised we don’t know if it will still be as effective.

“We know that swabbing technique is really important but we don’t know how well people can do that in their own homes.

“The really critical thing we don’t know is what effect it has on the transmission of coronavirus.”

The mass-testing programme was piloted in Liverpool in November, with the city’s entire population regularly tested with lateral flow tests and PCR tests.

The University of Liverpool’s team, which assessed the results, found lateral flow tests are best at finding people who are the most capable of passing on the virus.

For people who have high viral loads, and are therefore the most infectious, the lateral flow tests are more than 90% accurate.

PCR tests, which take longer to get results from, are better at detecting people who have COVID-19 but are past their most infectious stage, the Liverpool team found.

A review of 64 studies into lateral flow tests, mostly in Europe and the US, found the diagnostic accuracy of different brands of tests “varies widely”.

Published on 25 March, the Cochrane Review said the Innova test used in the UK was 58% accurate at detecting COVID-19 in symptomatic people and worked best in the first week after symptom onset.

Lead author Jon Deeks, professor of biostatistics at the University of Birmingham, said: “These tests work a lot less well in people who are asymptomatic than symptomatic. The government has not been clear on this.

“The only data we have is based on the [Liverpool and Birmingham] studies, where a total of 78 people had COVID-19, when 40 million tests have been given out.

“I personally find it quite shocking that the government thinks this is an adequate evidence base on which to base such a large, expensive, and quite invasive policy.”

COVID-19: Boris Johnson to announce plans for coronavirus passports, overseas travel and next step out of lockdown