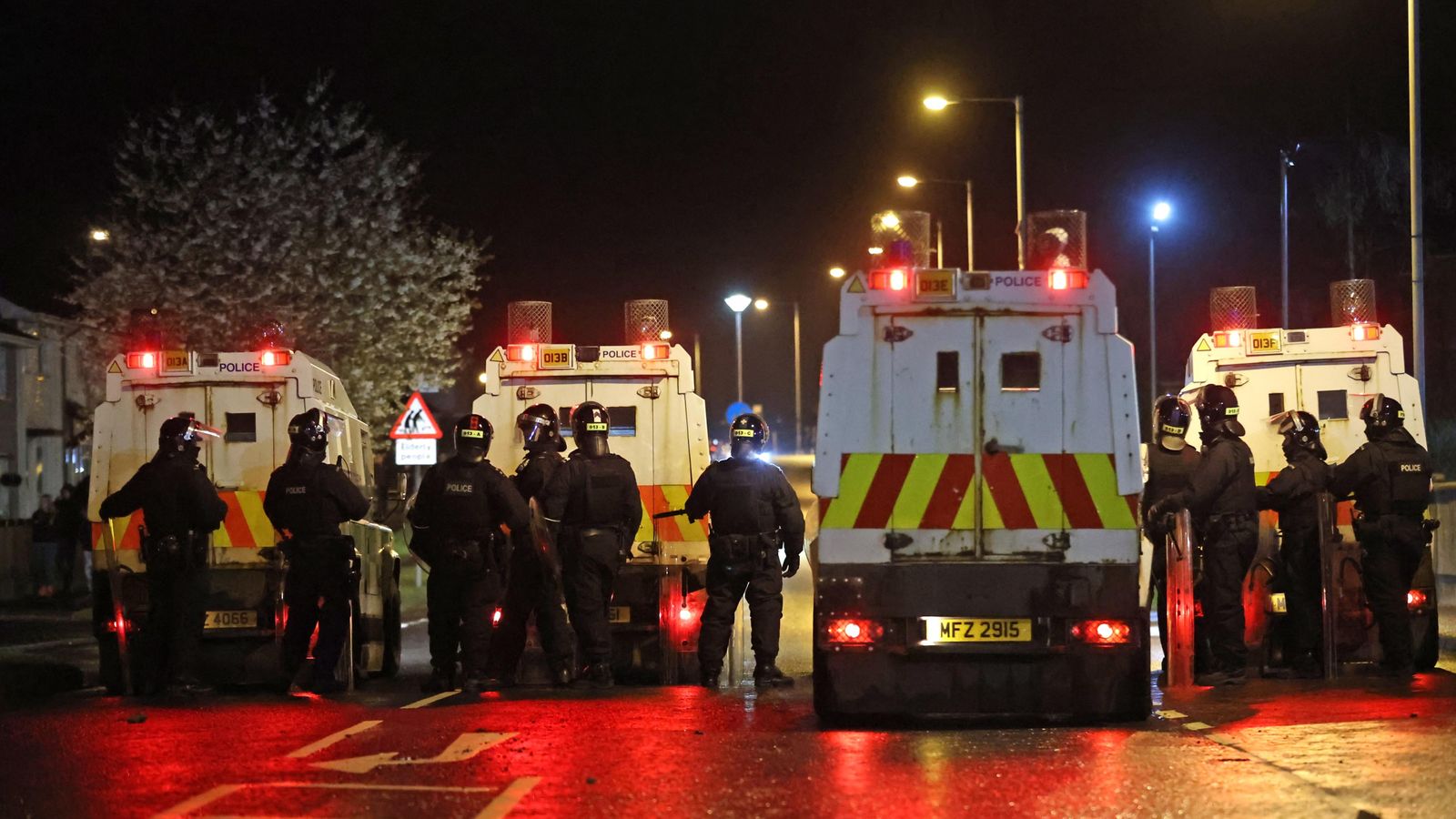 Police in Northern Ireland came under attack for a third night in a row as tensions spiralled into violence across the region.

Petrol bombs and bricks were thrown at officers in the loyalist areas of Newtownabbey and Carrickfergus in County Antrim on Sunday night, the PSNI said.

It came after 30 petrol bombs were hurled at police trying to stem disorder in Newtonabbey on Saturday.

Three cars were hijacked and set on fire as the group of around 20 or 30 people staged the “orchestrated attack”.

A total of 27 officers were injured in more violence across Belfast and Derry/Londonderry on Friday night.

Image: Bricks thrown at police in Carrickfergus near Belfast on Sunday

Tensions have been mounting within Northern Ireland’s loyalist community in recent months, with increasing anger about trade deals separating the region from the rest of the UK.

All major unionist parties have demanded the resignation of PSNI chief constable Simon Byrne, claiming communities have lost confidence in him.

Image: A fire in North Road, Carrickfergus on Sunday

And in County Antrim a series of recent drug raids carried out against the South East Antrim UDA have exacerbated ill-feeling towards the police and could be behind some of the disorder this weekend.

“Those attacking the police should stop,” he said. “Rioting and injuring rank and file officers will only result in young people being criminalised.”

Police officials have also urged for the violence to stop.

Image: A car is set on fire at Cloughfern roundabout in Newtownabbey on Saturday

PSNI north area commander chief superintendent Davy Beck said on Sunday: “We are living in unprecedented times, dealing with a global pandemic, no one needs the added pressure of disorder in their community.

“I would appeal to those who are taking to the streets to stop immediately, their actions are causing nothing but harm and distress to the very communities they claim they are representing.”

On Sunday evening the PSNI announced that a 47-year-old man has been charged in connection with rioting and throwing a petrol bomb in Newtownabbey on Saturday.

He is due to appear at Belfast Magistrates’ Court on 26 April, the force said.

Seven people have already been charged after the disturbances in the Sandy Row area of Belfast on Friday, with four adults – three men aged 25, 21 and 18 years old, and a woman aged 19 – accused of rioting.

Three teenagers aged 17, 14 and 13 were also charged with rioting and all seven will appear in court in Belfast on 30 April.