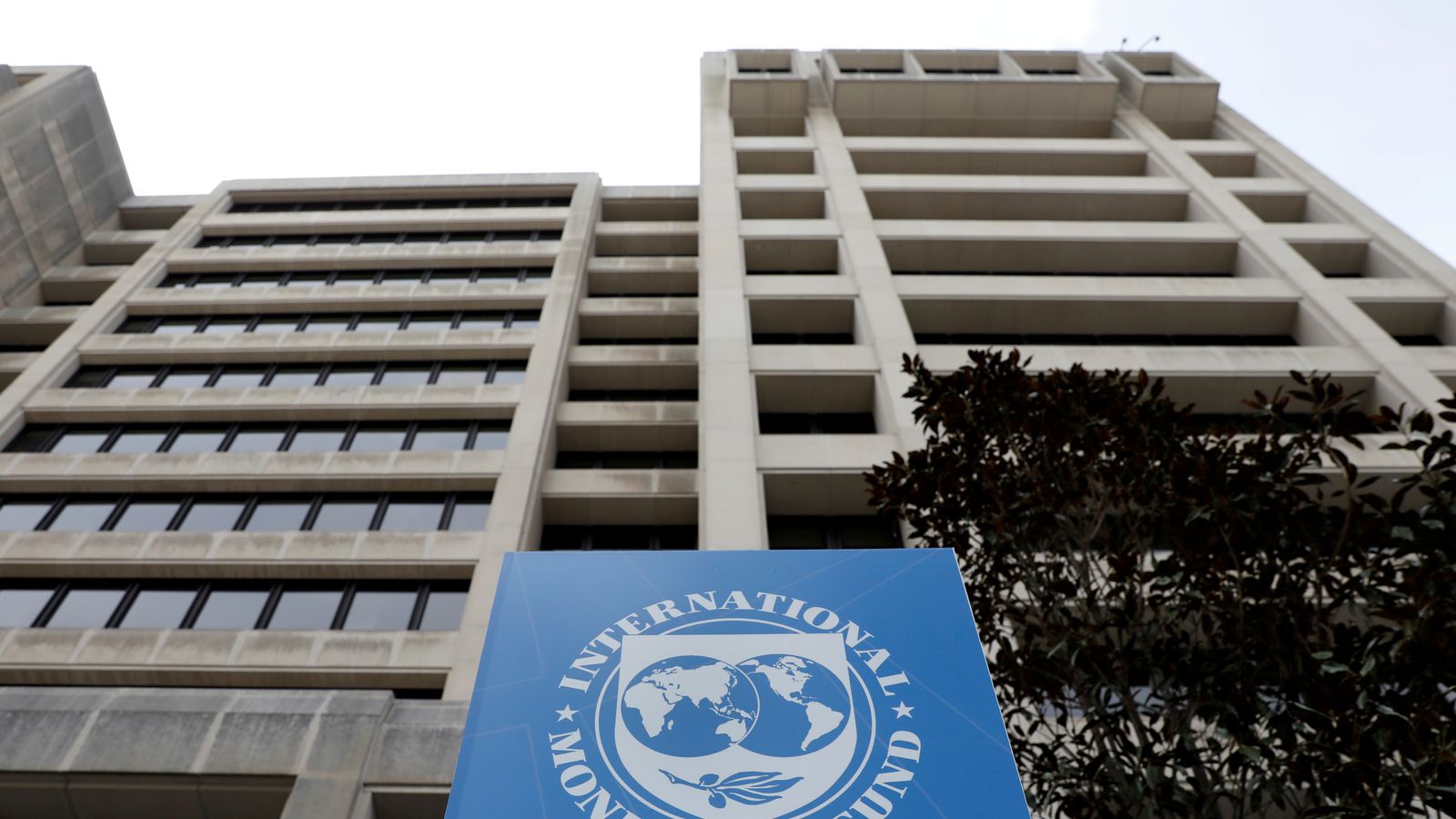 The global recession would have been three times deeper had governments not stepped in to rescue their economies, the International Monetary Fund has said, in its most positive outlook for the global economy since the onset of the pandemic.

In its latest update on the state of the global economy, the Fund upgraded its outlook for growth in a range of economies, including the UK, the US and much of Europe, and suggested that advanced economies may be able to avoid much of the long-term damage some economists had expected from the COVID-19 crisis.

It said it expected UK growth to be over 5% this year and next, pointing to the successful vaccine rollout.

Image: The IMF said that vaccine progress in the UK and US would help their respective economies bounce back

But while Britain will, according to the Fund’s forecasts, have the strongest growth in the group of seven industrialised economies next year, the depth of the recession in 2020 means it will be the second last of them to regain its pre-COVID level of gross domestic product.

Nonetheless, the Fund provided a relatively optimistic outlook for the global economy, with its longer term forecasts suggesting that some economies – in particular the United States – could avoid long term scarring.

Indeed, its forecast suggests the US economy could be stronger by 2024 than it would have been had coronavirus never hit.

The forecasts came as the IMF begins its spring meetings, which are again being held virtually from Washington DC.

The Fund’s chief economist, Gita Gopinath, said that the numbers could have been significantly worse.

“Already, unprecedented economic policy actions have prevented far worse outcomes,” she wrote in the foreword to the IMF’s World Economic Outlook – the most closely watched.

“Our estimates suggest last year’s severe collapse could have been about at least three times as large had it not been for the swift policy support worldwide.”

The Fund said that the UK economy will grow by 5.3% and 5.1% this year and next. Both of these represent upgrades from its previous forecast update in January.

It said that the US economy will grow by 6.4% this year and 3.5% next year, buoyed to some extent by President Biden’s stimulus packages.

The Fund put much of the economic rebound down to the success of the vaccination programme.

In an accompanying report it said that “global vaccination may well be the public project with the highest return ever identified,” pointing to potential revenue gains of $1trn across advanced economies, as the jabs allow people to return to work, which in turn boosts tax payments in the coming years.

However, it warned that the benefits of the vaccination programme were not being shared out as widely as could be the case.

The Fund said: “Vaccine access is… deeply iniquitous with high-income countries, with 16% of the world’s population, having pre-purchased 50% of the doses.

“Countries will need to work together to resolve production bottlenecks, ramp up production, ensure universal access, including through funding the COVAX facility on which many low-income countries rely heavily for doses, and avoid export controls.”

Perhaps the most striking of all the policy recommendations in the reports released on Tuesday was one suggesting that countries should consider levying taxes on the wealthy to fund the deficits caused by COVID-19.

“To accumulate the resources needed to improve access to basic services, enhance safety nets, and reinvigorate efforts to achieve the Sustainable Development Goals, domestic and international tax reforms are necessary, especially as the recovery gains momentum.”

Responding to the IMF report, UK Chancellor Rishi Sunak said: “Our package of support continues to be one of the largest and most comprehensive in the world, with more than £350bn spent on the response to COVID-19 so far.

“This period has undoubtedly been one of the most challenging we’ve ever faced, but through our Plan for Jobs we have focused on protecting and creating as many jobs as possible throughout the crisis.

“As we progress with the UK’s roadmap and the vaccine rollout, I believe there are reasons for optimism, and we are paving the way for brighter times ahead.

“We will continue to work closely with our G7 and G20 partners to help ensure that no country is left behind in the global economic recovery from the pandemic.”

COVID-19: Boris Johnson has not ‘given up’ on foreign holidays from 17 May