COVID-19: First dose of Moderna vaccine given in UK as 24-year-old carer Elle Taylor gets jab 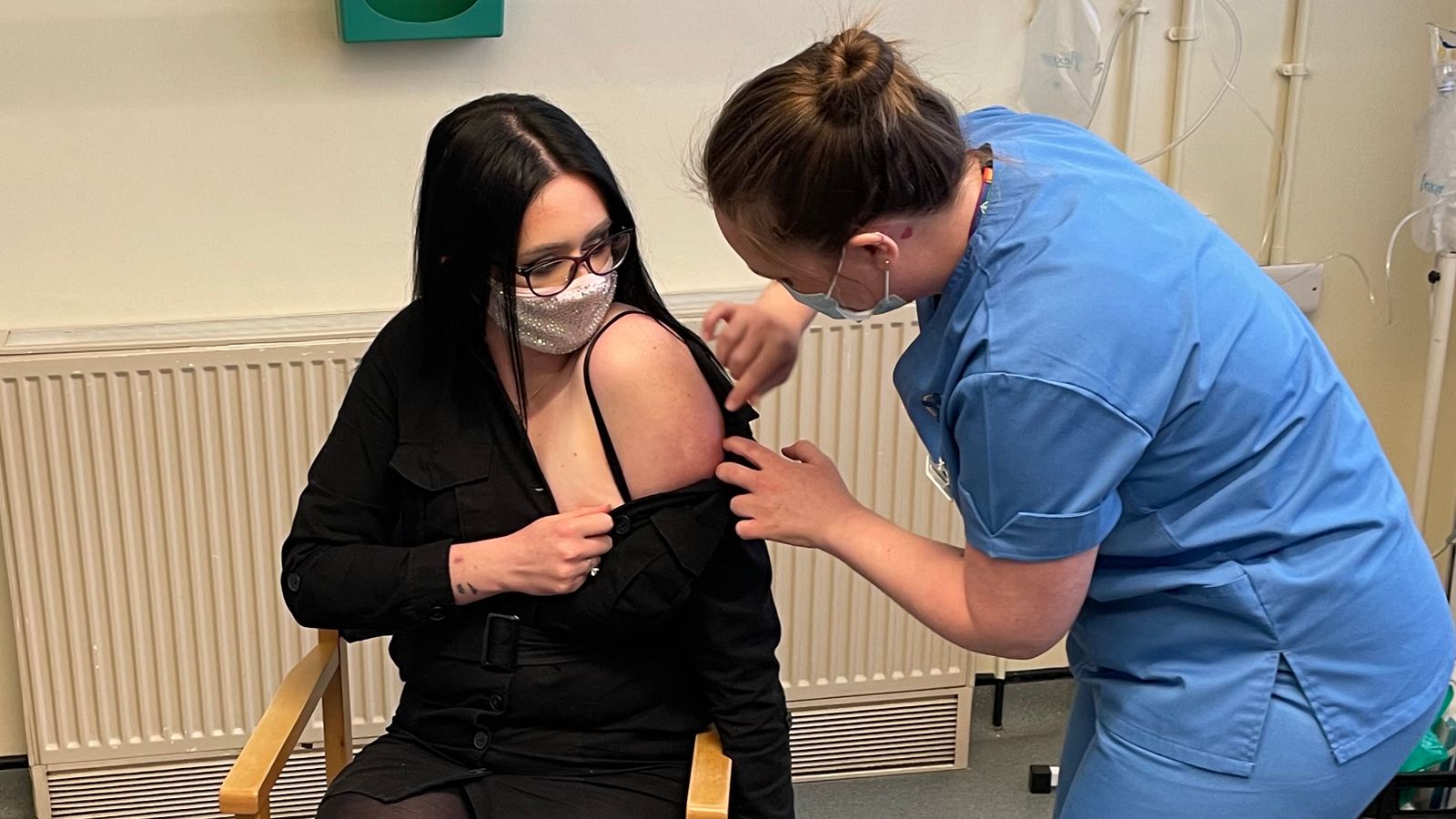 A 24-year-old carer has become the first person in the UK to receive the Moderna vaccine as it becomes the latest jab used in the country’s vaccination programme.

Elle Taylor, from Ammanford in Wales, who is an unpaid carer for her 82-year-old grandmother, received the vaccine this morning.

“I’m very excited and very happy,” she said. “I’m an unpaid carer for my grandmother so it is very important to me that I get it, so I can care for her properly and safely.

“My grandmother has had her first dose and she is going for her second dose on Saturday.”

She said she only found out on Tuesday evening that she was to be the first Briton to receive the Moderna jab in the UK.

First doses of the Moderna jab are being administered at West Wales General Hospital on Wednesday, with a total of 5,000 doses having been distributed to vaccination centres across Carmarthenshire, Ceredigion and Pembrokeshire.

Supplies of the Moderna vaccine arrived in Wales on Tuesday.

Moderna’s vaccine is the third to be approved for use in the UK, and is being rolled out alongside jabs from Pfizer-BioNTech and Oxford University-AstraZeneca.

The UK has purchased 17 million doses of the Moderna jab, enough for 8.5 million people, and phase three results suggest the vaccine has 100% efficacy against severe cases of coronavirus.

Prime Minister Boris Johnson urged people to “please get your jab as soon as you are contacted”.

“The UK government has secured vaccines on behalf of the entire nation and the vaccination programme has shown our country working together at its best.

“Three out of every five people across the whole United Kingdom have received at least one dose, and today we start with the third approved vaccine. Wherever you live, when you get the call, get the jab.”

Wales health minister Vaughan Gething added that the introduction of a third vaccine “significantly adds to our defences in the face of coronavirus and will help protect our most vulnerable”.

UK government minister Paul Scully told Sky News the Moderna jab would be “coming to England and the other devolved nations across the next few days”.

“You’ve heard the vaccines minister Nadhim Zahawi talk about the third week of April, we’re already just about to start the second week of April so that’s not too long to wait to get that third vaccine up and running,” he added.

Scotland received its first batch of Moderna vaccines on Monday.

According to Moderna, no serious safety concerns have been identified among those who have taken its vaccine. Severe events after the first dose have included pain around the injection site, while some have reported fatigue, muscle pain, joint pain and headaches after receiving their second dose.

It comes after a trial of the Oxford-AstraZeneca COVID-19 vaccine on children in the UK was paused while the medicines regulator investigates a possible link between the jab and rare blood clots in adults.

A University of Oxford spokesperson stressed that there were “no safety concerns” with this specific study, but that further information was being awaited from the Medicines and Healthcare products Regulatory Agency (MHRA).

A spokesperson for the Department of Health and Social Care said: “No decisions have been made on whether children should be offered vaccinations.

“We will be guided by the advice of our experts on these issues including the independent MHRA and Joint Committee on Vaccines and Immunisation.”

‘MHRA will only vaccinate when it’s safe

Over the weekend, it was reported that there had been 30 blood clotting cases recorded by the MHRA out of more than 18 million doses of the AstraZeneca shot administered.

The World Health Organisation maintains that the benefits of this vaccine outweigh any risks.

Adam Finn, professor of paediatrics at the University of Bristol, said: “There are some things that are very clear. The first is that these cases are very rare indeed. The second is that the vaccines that are available and in use in the UK prevent COVID very effectively.”

He added: “In short, if you are currently being offered a dose of Oxford-AstraZeneca vaccine, your chances of remaining alive and well will go up if you take the vaccine and will go down if you don’t.”

The ongoing safety concerns about the AstraZeneca-Oxford vaccine do not seem to have crossed the Channel. At least not yet.

The possible link between it and a rare type of blood clot has been around for a few weeks now.

Some governments in Europe have decided that they will not administer the jab to younger people.

That is against the advice of European Medicines Agency and the World Health Organisation.

But could these safety concerns actually derail the UK’s phenomenal vaccine rollout? Potentially yes, but realistically it is unlikely. There are a number of reasons.

Vaccine hesitancy in much more culturally entrenched on the continent, especially in France and Germany. It is not as serious here among the wider population.

But clearly there are parts of the population where it is a concern, like our black and ethnic minority communities.

Also the rollout has been so successful that we are working through our target groups very quickly.

These are the ones who are most at risk: the clinically vulnerable and the elderly.

We know that our senior citizens are most compliant where vaccines are concerned.

Hesitancy becomes more prevalent in younger people. By the time we get round to vaccinating the under-40s, more vaccines will be on stream.

So if there is still uncertainty over the Oxford vaccine then it is possible an alternative can be administered.

This was simply not possible at the start of the rollout – the urgency demanded speed and scale.

For now the most significant bump in the road is the dramatic slowdown in the number of people being vaccinated. The Easter bank holidays could be a factor, and so is vaccine supply.

We were warned that this would happen. The government’s own scientists have forecast a significant drop in vaccine doses being administered until the end of July.

But that has not dented the government’s confidence. It says we are still on track to meet its target of vaccinating all adults by the end of July.