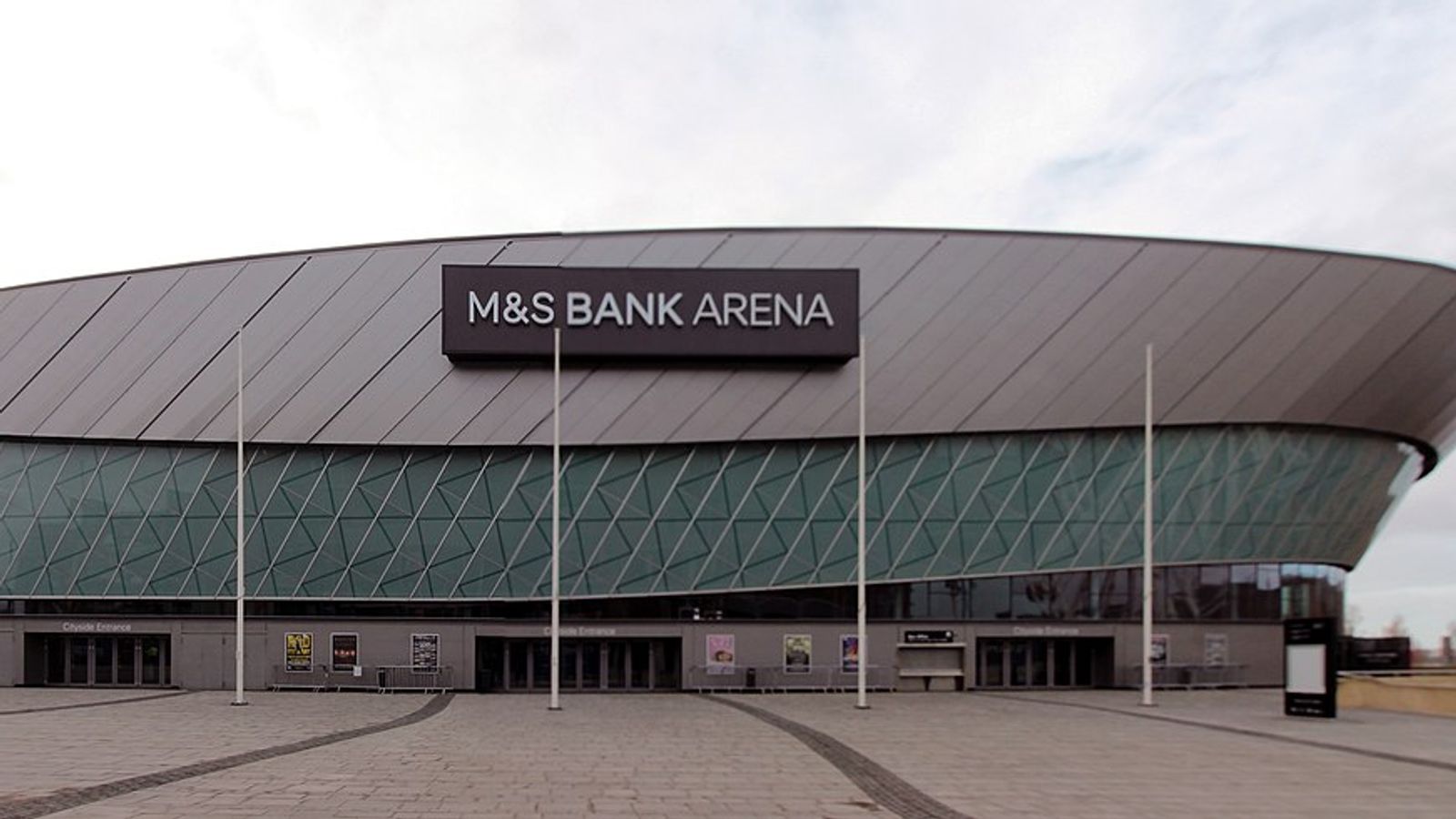 A comedy club in Liverpool has withdrawn from a trial that would test how venues could open safely without social distancing, citing “confusing messaging” from the government.

The Hot Water Comedy Club’s two-hour event was due to be held at the city’s M&S Bank Arena Auditorium on 16 April, with COVID-19 screening using lateral flow tests before and after.

It would have been the first venue to host an event as part of the government’s official test scheme, which also includes the FA Cup final at Wembley and the World Snooker Championship at the Crucible in Sheffield.

Image: The Hot Water Comedy Club’s comeback event would have had four acts over two hours

But the Liverpool club has now pulled out and cancelled the 300-person occasion, saying the government failed to clarify whether it would involve so-called COVID vaccine passports.

The club insisted it has never agreed to be involved in a vaccine passport trial. It also says it has been subjected to an online “hate campaign”.

Co-owner Binty Blair said he had tried to contact the Department for Digital, Culture, Media and Sport (DCMS) to ask whether such passports will be trialled in the pilot, but to no avail.

However, the government confirmed on Tuesday evening there will be no requirement for participants in the first pilot events, in venues such as a comedy club, to have received a vaccination. And the government “strongly” condemned the online abuse.

The DCMS had announced at the weekend that a series of trial events were planned for the coming months, as officials look at how venues like football grounds and nightclubs can reopen without the need for distancing.

It said COVID-status certification will also be trialled as part of the programme, while detailing several events on an initial list of pilots, including the Hot Water Comedy Club.

Mr Blair said: “The reason for us backing out is the government wasn’t clear about the COVID passports. The problem is we don’t know what we signed up for.”

He said the club has been “significantly damaged” after receiving more than 4,000 angry messages.

Speaking about the online abuse, he said: “Most of them have been mental. Some have accused us of being backhanders. I’m not really fussed about the backlash from keyboard warriors but some have emailed us with genuine concerns.”

4 April: Comedy club to hold event with no distancing

Mr Blair also said four acts have lost £300 each as a result of the cancelled event.

A statement on the Liverpool comedy club’s Facebook page referred to an official government document which the club said was “very unclear and confusing as it looks like this trial is a pre cursor to COVID status certification (vaccine passports) led events further down the line”.

The statement went on: “As a consequence of misleading press releases/media articles and the confusing messaging on the official government website we have made the decision not to be a part of any programme at all.”

The club also stated “we agreed to be part of the ‘Event Research Programme’ in early March” and “vaccine passports were never at any time mentioned in any of the discussions we had prior to agreeing to put on the event”.

It went on to say that a few weeks later there was “a press release sent out by the government to all UK media”, adding: “The headlines were all about ‘vaccine passports’.”

The club said: “For some reason, all trials had been bundled together under the same press release and it seemed that we were part of the vaccine passport programme.

“We also happened to be the very first event of any trial in operation so, not surprisingly, the headlines mentioned ‘Hot Water Comedy Club’ and ‘The Vaccine Passport Programme’ as if we were part of the programme.”

It continued: “We were very concerned about the way we had been portrayed in the media linking us to vaccine passport trials, something we had never agreed to.”

Image: The FA Cup final at Wembley is due to be a test event

Liverpool City Council said on Sunday that events taking place in the city to trial how venues will operate safely will not involve vaccine passports.

The council said the Events Research Programme (ERP) will look at how different approaches to social distancing, ventilation and test-on-entry protocols, including the use of lateral flow tests, could be used ahead of step four of the roadmap out of lockdown in June.

“Our initial pilot events will be based on proof of a negative test result and there will be no requirement for participants to have received a vaccination in venues like a comedy club.

“Our ambition is to help the British public get back to the mass events they enjoy safely – such as going to sport, live music and cultural events – in a way that ensures the risk of transmission is sufficiently low while maintaining commercial viability.”

COVID-19: ‘Another key milestone’ as Moderna vaccine rollout begins in the UK