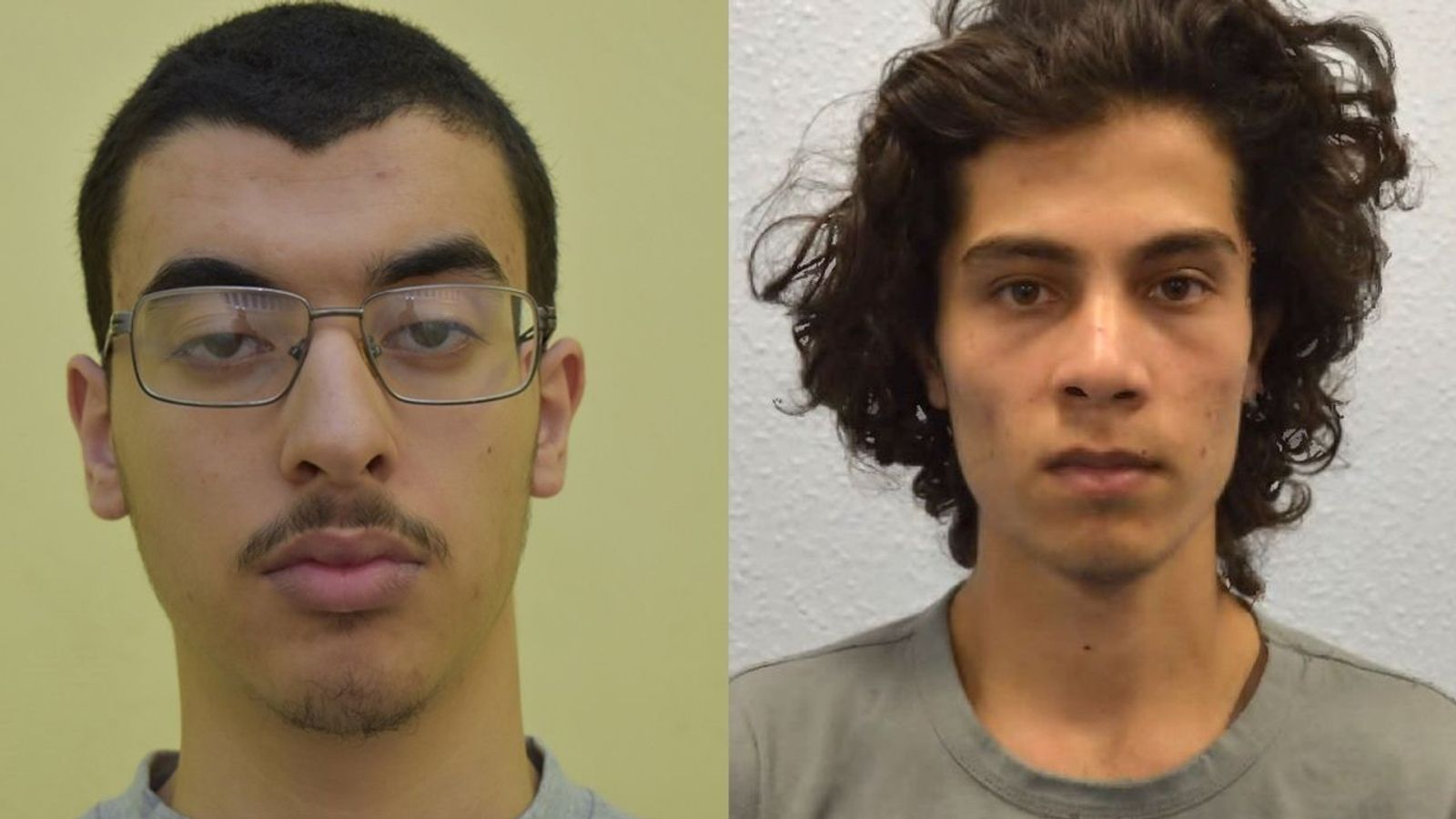 The brother of the Manchester Arena bomber has appeared in court accused of assaulting a prison officer and told the magistrate: “I did assault that filthy pig, but I don’t see any wrongdoing in that.”

Hashem Abedi, 23, from Fallowfield, Manchester, appeared in court by video link for the first time since refusing to attend the final weeks of his Manchester bombing trial at the Old Bailey.

Abedi was found guilty last year of 22 counts of murder and sentenced to life with a minimum term of 55 years, the longest ever handed down by the Old Bailey.

He is charged, alongside two other convicted terrorists, with assaulting a prison officer at HMP Belmarsh in south London, leaving the officer with cuts to his head, bruises and hearing loss.

Image: Abedi assisted his brother in the Manchester bombing arena

Wearing a black, grey and white fleece, and glasses, with moustache and afro-style hair, Abedi appeared from Frankland jail in County Durham on his 24th birthday.

He confirmed his name and date of birth but when asked whether he pleaded guilty or not guilty, he said: “I did assault that filthy pig but I don’t see any wrongdoing in doing that.

In answer to the charge that he beat a second officer, he added: “Same as before, but I don’t see any wrongdoing.”

Chief Magistrate Paul Goldspring told the court: “I will register that as a not guilty plea.”

Abedi is charged alongside Ahmed Hassan, 21, from Sunbury, Surrey, who was found guilty of trying to blow up a tube train by setting off a device in a shopping bag at Parsons Green in September 2017.

Hassan appeared from a separate room at Frankland jail and when asked to confirm his name, he told the court: “I want to make three points before I confirm my name.

“I want you to know that I hate you very much because you’re a judge, judging by anything other than the law of Allah.

“Second, you’ll be destined for hellfire unless you repent and submit yourself to the law of Allah.”

He added: “I am not represented and evidence has not been disclosed to me.”

He pleaded not guilty.

The pair were allegedly joined in the attack by a third prisoner, Muhammed Saeed, 23, from Trafford, Manchester, who is awaiting sentence for using encrypted platforms to share ISIS propaganda.

The three men are charged with assaulting Paul Edwards, a prison officer at HMP Belmarsh, causing actual bodily harm, on 11 May, last year.

They were charged on 12 January and all three were due to appear by video link at Westminster Magistrates Court on Wednesday but Abedi and Hassan refused.

Saeed did appear on 7 April from Whitemoor jail in Cambridgeshire, pleading not guilty.

The case was committed to Woolwich Crown Court on 5 May.