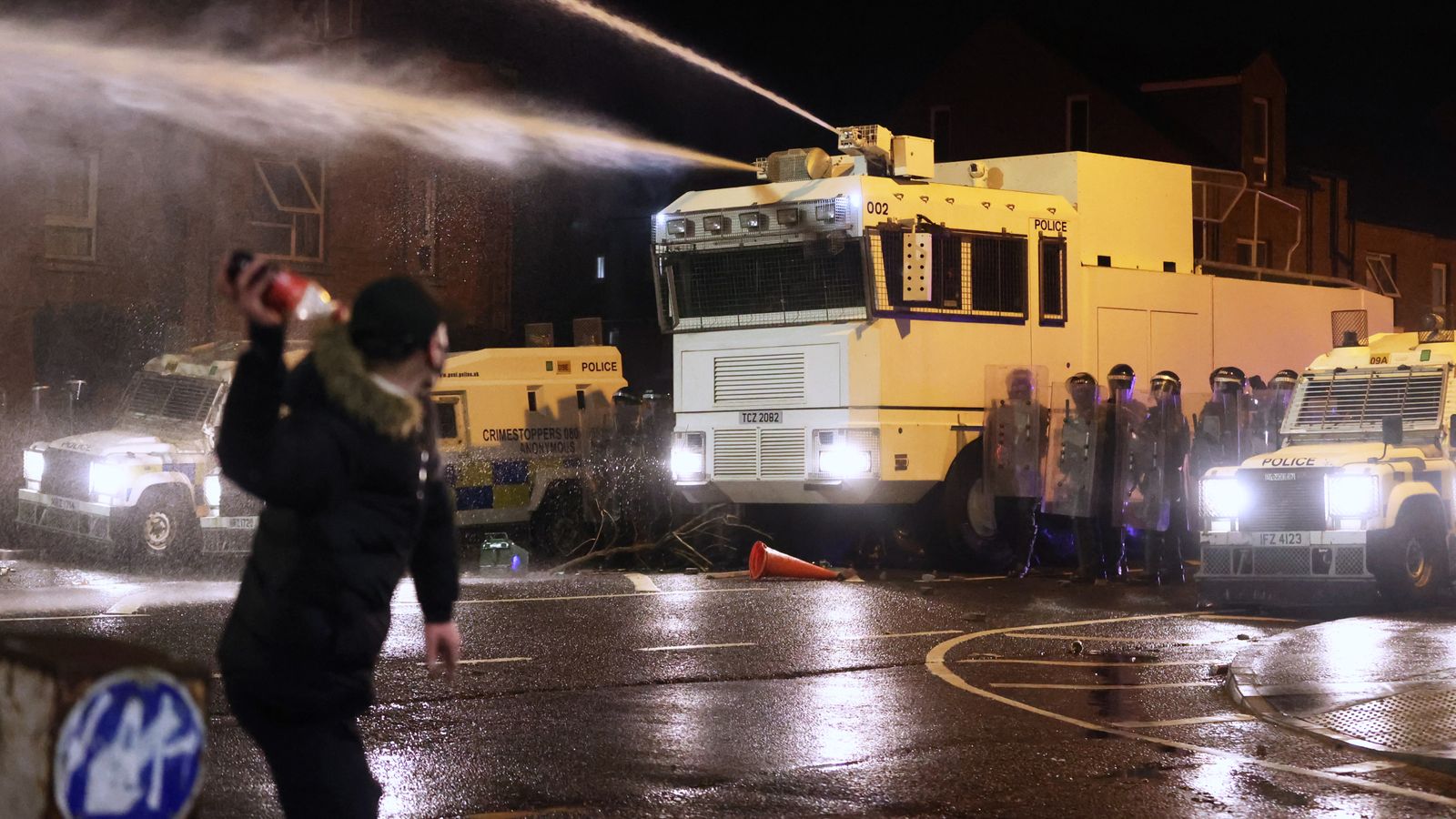 Rioters have been blasted with water cannon in fresh unrest on the streets of west Belfast.

It comes after Northern Secretary Secretary Brandon Lewis admitted Brexit had created “real issues” in the country, but said violence was not the answer.

Mr Lewis has travelled to Belfast following riots across Northern Ireland that haveinvolved children as young as 12 and left 55 police officers injured.

Police have called it the worst unrest in years.

Image: People stand next to a fire in a street in Belfast

On Thursday night, trouble flared again when stones and fireworks were thrown at police by youths on the nationalist Springfield Road, near to the scene of Wednesday’s riots.

Water cannon were deployed after warnings to disperse were ignored and people continued to throw missiles.

“My heart goes out to those living in the area who are living with this fear and disturbance. This needs to stop now before lives are lost.”

Speaking to the Northern Ireland Executive at Stormont House, Mr Lewis said: “It’s really good to see all five parties coming together with a clear statement, which is that violence is not acceptable.

“I’ll be the first to acknowledge over the first few months of the year there were real issues around how the [Northern Ireland] protocol has landed for people, both as consumers and those in the loyalist and unionist community.

“The way to deal with these things is through a democratic and diplomatic, political process.

“There is no legitimisation of violence to deal with any of those issues. It doesn’t serve anyone’s cause whatever their concern is on any given issue.”

Mr Lewis denied he had plans to meet with the Loyalist Communities Council and said he is willing to meet with anyone “who is clear that the process for taking issues forward is a democratic proper political process”.

Irish premier Michael Martin and Prime Minister Boris Johnson called for calm after they spoke over the phone on Thursday about the unrest – and the latter has been called on by Labour leader Sir Keir Starmer to convene urgent cross-party talks.

Image: A peace wall in west Belfast was rammed and cars set on fire in Wednesday’s violence

Earlier in the day, the Northern Ireland Executive’s five parties united to condemn the “deplorable” riots.

It is “gravely concerned by the scenes we have all witnessed on our streets”, it said in a statement, including those witnessed in west Belfast on Wednesday.

Wednesday night’s violence, the most serious of several nights of unrest in loyalist communities, came amid tensions over the controversial Northern Ireland Protocol, part of the Brexit deal struck by the UK and the EU that has created what some see as a border in the Irish Sea.

There is also anger over the police announcing in March they will not prosecute anybody for attending former Sinn Fein leader Bobby Storey’s funeral last June, which allegedly breached COVID-19 restrictions on gatherings in public.

Deputy first minister Michelle O’Neill was part of the funeral cortege which saw about 2,000 people lining the streets.

Image: Smoke billows over a neighbourhood in Belfast after a bus was set on fire on another evening of violence Image: The wreckage of the bus set on fire in Belfast

Assistant Chief Constable Jonathan Roberts said there were “upwards of 600 people present” on Wednesday evening, some of them only 13 or 14 years old.

“Young people were being encouraged to commit criminal acts by adults, who stood by clapping and encouraging the violence,” Mr Roberts said.

A bus was hijacked and set on fire and a press photographer assaulted by two masked men.

Mr Roberts said a “large volume of petrol bombs” had been used, some of which were thrown into the bus.

He added: “Thankfully the driver escaped without injury. A moving bus on fire surrounded by a large crowd could have led to members of the local community being seriously injured.”

The unrest on Wednesday evening was the most serious Northern Ireland has seen in years, Mr Roberts said.

There was an “element of pre-planning” and “equally large numbers” were present from both sides of the political divide.

Paramilitary involvement is an “active line of investigation” and potential “orchestration” is also being considered.

There is the potential for “imminent loss of life”, while Mr Roberts said the PSNI (Police Service of Northern Ireland) is aware of other events being planned via social media.

The executive said: “Attacks on police officers, public services and communities are deplorable and they must stop.

“Destruction, violence and the threat of violence are completely unacceptable and unjustifiable, no matter what concerns may exist in communities.

“Those who would seek to use and abuse our children and young people to carry out these attacks have no place in our society.”

The executive continued: “While our political positions are very different on many issues, we are all united in our support for law and order.”

‘No room at the table for criminal gangs’

The Stormont Assembly, which has been recalled to discuss the violence, has passed a motion calling for an immediate end to the unrest.

First Minister and DUP leader Arlene Foster said: “We should all know that when politics are perceived to fail, those who fill the vacuum cause despair.”

Deputy First Minister and vice president of Sinn Fein, Michelle O’Neill, said it is a “miracle that, as we stand here today, no one has been killed”.

Alliance party leader and justice minister, Naomi Long, said there had been “inflammatory rhetoric with threats of renewed violence bandied around by people who claim to be trying to lead others away from the violent past”.