Northern Ireland: Why has violence broken out 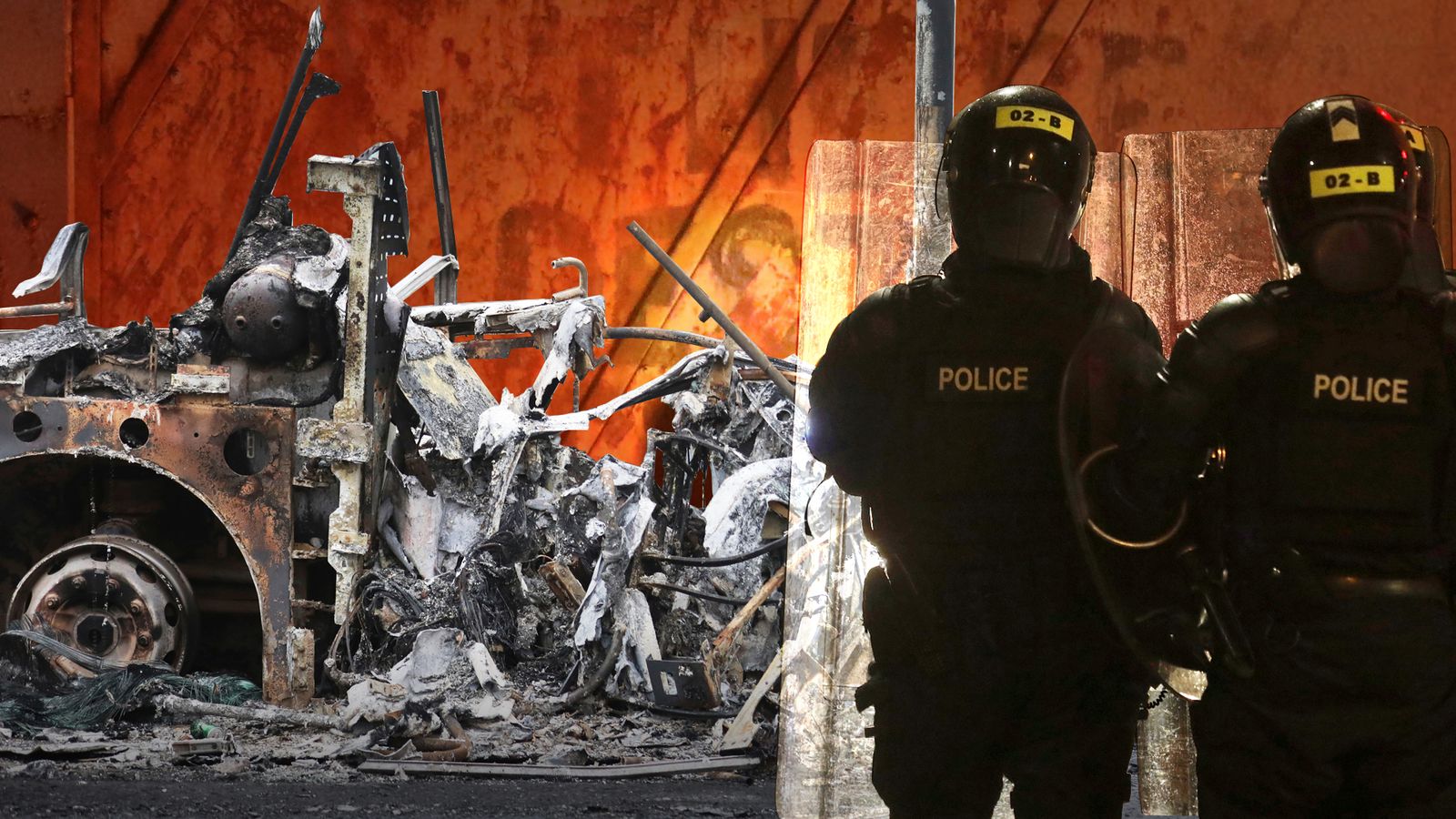 More than a week of unrest has rocked Northern Ireland in what police have described as the worst violence seen in the country in years.

Fifty-five police officers have been injured and petrol bombs were thrown at a bus with passengers in Belfast on Wednesday night.

The riots have involved children as young as 12.

Violence erupted on 29 March in a loyalist area of Londonderry.

There have been protests nearly every night since then in loyalist strongholds across Northern Ireland, with mainly young people throwing bricks, petrol bombs and fireworks at police officers.

Derry, Ballymena, Carrickfergus, Newtonabbey and the capital, Belfast, have all seen violence in the past week.

On Wednesday, the unrest escalated into sectarian clashes over a “peace wall” in west Belfast that divides a mostly Protestant loyalist area from a predominantly Catholic nationalist area.

The nationalists want Northern Ireland and Ireland to be unified, while loyalists favour keeping the country in the United Kingdom.

Image: People stand next to a fire in a street in Belfast

A gate dividing the two Belfast communities was rammed open, police officers and a photographer were attacked, and a bus with passengers was hijacked and petrol-bombed as the driver tried to leave the scene.

Unauthorised parades being organised on social media are reported for this weekend as it approaches the 23rd anniversary of the signing of the Good Friday Agreement.

Sporadic outbreaks of street violence have happened since the peace accord ended “the Troubles”, which saw decades of Catholic-Protestant bloodshed over the status of the region in which more than 3,000 people died.

But the latest unrest “was at a scale we have not seen in recent years”, said Police Service of Northern Ireland Assistant Chief Constable Jonathan Roberts.

Image: Smoke billows over a neighbourhood in Belfast after a bus was set on fire on another evening of violence.

What’s the reason for the unrest?

Brexit and alleged COVID-rule breaking at an IRA funeral are two of the reasons being given.

Unionist leaders are blaming growing loyalist tensions over the Irish Sea border that has effectively been imposed due to the UK’s Brexit deal with the EU.

That has meant products from Great Britain have to undergo EU import procedures at Northern Ireland ports instead, which has resulted in delays and sparse supermarket shelves.

Unionists say this places Northern Ireland’s constitutional position in the UK at risk.

The Brexit border issues have been happening since January, when they came into force, but a funeral also appears to have sparked the violence.

Unionists are angry after police said in March they would not prosecute Sinn Fein leaders, who want a united Ireland, for allegedly breaking COVID regulations at the funeral of former IRA intelligence chief Bobby Storey last June.

About 2,000 mourners, including deputy first minister Michelle O’Neill, lined the streets when strict COVID restrictions meant people could not gather in public.

Three months after the funeral, Ms O’Neill, who refused calls to step down, admitted the government’s public health messaging was “undermined” by the controversy.

Who is carrying out the violence?

There is no clear indication an organised group is orchestrating the violence.

However, the unrest has been concentrated in areas where criminals linked to loyalist paramilitaries have much influence.

Most of the violence has taken place in groups of 20 to 40 people, but police said more than 600 people “gathered” as the bus was attacked on Wednesday night.

Asst Chief Const Roberts said children “as young as 13 or 14 were being encouraged and supported by adults who stood by and clapped and cheered”.

He said there was an “element of pre-planning”, with “equally large numbers” of people from both sides of the political divide.

Paramilitary involvement is an “active line of investigation” and potential “orchestration” is also being considered,” he added.

Image: A car drives past the wreckage of a Translink Metrobus on fire on the Shankill Road in Belfast during further unrest. Picture date: Wednesday April 7, 2021.

Other areas have also seen children involved in the violence, fuelling suspicion it is being orchestrated from behind the scenes by sinister elements.

Experts suggest loyalist paramilitaries from the South East Antrim UDA, who are involved in organised crime, may have exploited an opportunity to get back at police after a recent crime clampdown in the area around Carrickfergus.

Image: Riot police are pictured in the Belfast suburbs on Sunday

How have people reacted to the violence?

Asst Chief Const Roberts said Wednesday night’s violence was the most serious in years and there is the potential for “imminent loss of life”.

The Police Federation for Northern Ireland said the violence “could set our society back years” and said it thought such incidents had been “consigned to history”.

Image: Rioters clash with police in the Sandy Row area of Belfast

The Northern Ireland Executive said its five parties were united in supporting law and order as it condemned the “deplorable” riots and said the use of children was “child abuse”.

The Stormont Assembly was recalled from Easter recess to discuss the violence and a motion was passed to call for an immediate end to the unrest.

“We should all know that when politics are perceived to fail, those who fill the vacuum cause despair,” she told Stormont.

He told the Executive: “The way to deal with these things is through a democratic and diplomatic, political process.

“There is no legitimisation of violence to deal with any of those issues.”

Irish premier Michael Martin and Prime Minister Boris Johnson called for calm after the pair spoke on the phone on Thursday afternoon.