Prince Philip dies: A nation mourns loss of Duke of Edinburgh as public pays their respects 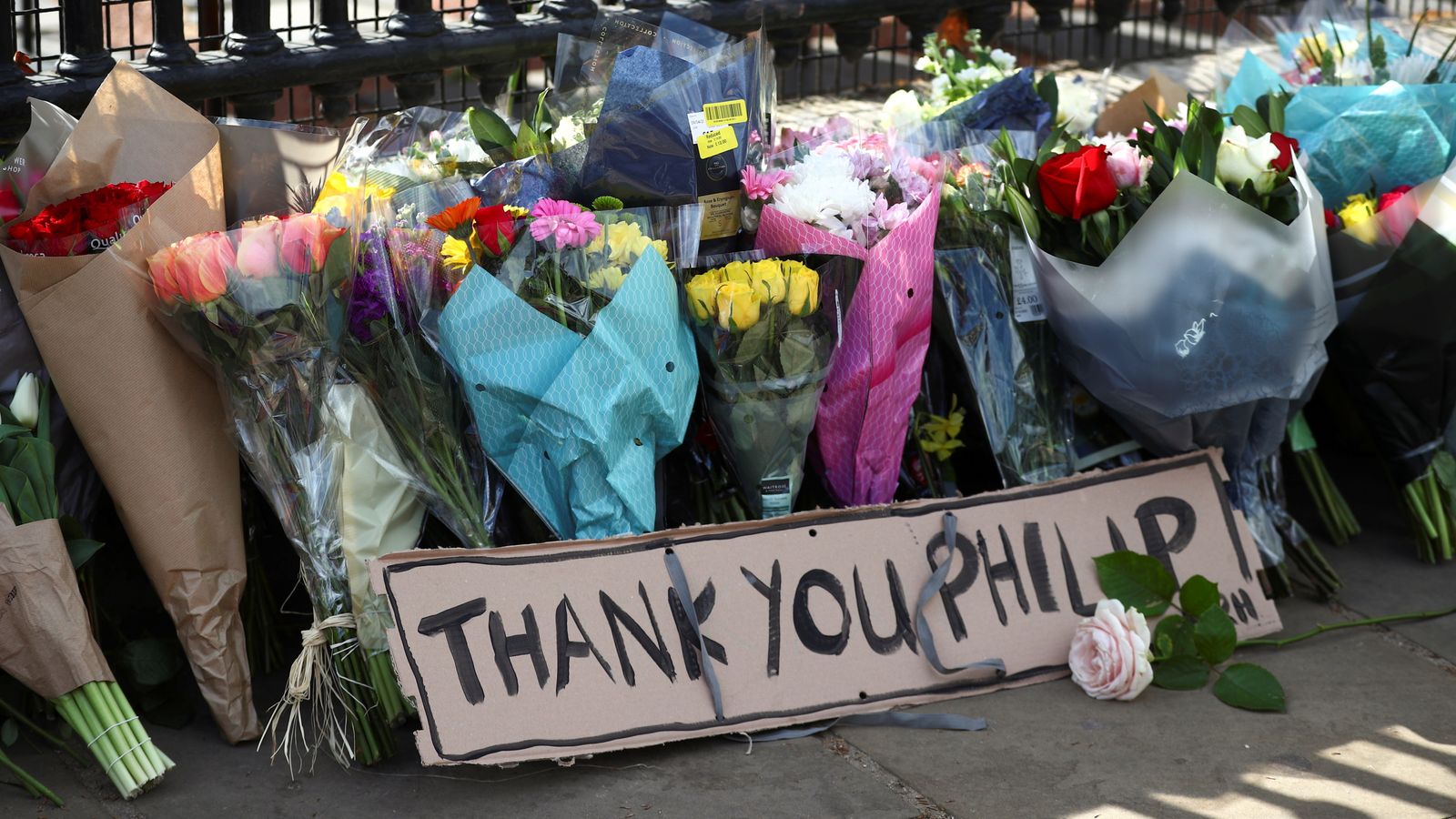 A steady stream of people has been arriving at Windsor Castle and Buckingham Palace to lay flowers in tribute to the Duke of Edinburgh.

Bunches of daffodils were among dozens of tributes to Prince Philip placed by the gates of the palace in central London within moments of the announcement of his death, with many people opting to wear face coverings while paying their respects.

Image: Bouquets of flowers are laid down outside Buckingham Palace

Many were placed before the government asked people not to lay flowers or gather at the royal residences, as coronavirus restrictions remain in place.

Police, mounted on horses, reminded those gathered to adhere to social distancing guidelines and remain two metres apart from other groups.

Stewards later put a barrier around the palace gates, aimed at preventing overcrowding.

Members of the public were advised to join a queue to take pictures.

Meanwhile, an online book of condolence is now available on the royal website for those who wish to send a personal message.

In Windsor, members of the public were encouraged to leave any tributes at the Cambridge Gate on the Long Walk.

Well-wishers arriving with flowers at the Henry VIII Gate in the town centre were directed to the other location by police officers.

Bells at a number of churches around the country tolled to mark his passing, with St Giles in central London and Christ Church in Oxford among them, and flags were lowered to half mast at all government sites.

Racegoers stood still and bowed their heads solemnly as they held two minutes of silence at the Aintree course in Liverpool, where crowds have begun to gather ahead of Saturday’s Grand National.

Image: Racegoers and riders observe a two-minute silence for the late Duke of Edinburgh, during Ladies Day at Aintree Racecourse, Liverpool

Sky’s home editor Jason Farrell, who is outside Windsor Castle, said: “There has been a steady stream of people coming with bouquets of flowers and I could see more of them wandering up the road, just to lay those down here at the gates of Windsor Castle.

“There has been this warning about the police not wanting people to break COVID restrictions.

“People are generally coming, laying the flowers and then going away.

“There’s not that many people hanging around, but there are a few people just along the sides of the roads with their cameras out, taking photographs, just taking in the moment, coming here to pay their respects, perhaps not even carrying flowers… to stand for a moment outside the castle and reflect on the loss of the Duke of Edinburgh.

“You can see that there’s a bit of a police presence here as well, just talking to the general public, but it’s not huge.”

Image: Member of the public carry flowers to leave at the gates of Buckingham Palace

One of those who came to Windsor Castle to pay their respects, Eric Boisseau, said: “He brought stability, thorough hard times – and God knows they’ve had hard times.

“He supported his family and he supported the community – he’s a hero.”

Susie Oliver added: “Without his support, Elizabeth couldn’t have been the remarkable Queen that she has been.

“I used to see him carriage driving in Windsor and it’s been an honour living in his back garden.”

She said: “He was a lovely man – and a great figurehead that we looked up to.”

Around 30 people quickly began queueing to read the sign, despite the police presence.

It was part of an age-old tradition of placing a notice on the railings of Buckingham Palace, but because of the coronavirus pandemic, the notice was taken down to prevent crowds forming.

Image: Two people console each other in front of the gate at Buckingham Palace in London. Pic: AP

The statement read: “It is with deep sorrow that Her Majesty The Queen has announced the death of her beloved husband, His Royal Highness The Prince Philip, Duke of Edinburgh.

“His Royal Highness passed away peacefully this morning at Windsor Castle.

“Further announcements will be made in due course.

“The Royal Family join with people around the world in mourning his loss.”

Sky correspondent Ashish Joshi, at Buckingham Palace, said: “It’s still Easter holidays, there are families who would have been here anyway, so… once the news broke, naturally, they would have found themselves walking towards the gates of Buckingham Palace.

“It’s all very quiet. They are respecting social distancing rules… they are staying apart… but as I think the afternoon wears on, you will have more people who are coming in. Maybe they will stop for a minute.

“Here in southwest London, Buckingham Palace will become the focal point now for the world.“

Adrian Dannatt, 57, from London travelled to Buckingham Palace and told Sky News: “I came down especially to pay my respects to the great man – a divisive, amusing, difficult, entertaining, impressive man.

“My uncle went to his 80th birthday at Windsor Palace and was absolutely awed by him and thought he was one of the most amusing people he’d ever met.

“He was the last of the non-PC figures within the public domain. Not a trace of self-policing, or even public policing of what he said, and now he’s gone.”

Emily Legge, 22, said: “We chose to come down here today because we wanted to be a part of this.

“At the moment with COVID I think everyone’s feeling quite alone, and it’s nice to almost be together and mourn together.”

Amerigo Olivito, 17, from Italy said: He was a really good man, a generous man, and he was so strong and brave.

“He was a part of history and touched the souls of everybody.”

At the Welsh Parliament in Cardiff Bay, where the Duke of Edinburgh was here for the Royal opening of the Senedd in 2006, the flags are flying at half mast.

Friends Antony Spiteri, 23 and Imogen Davies, 22 have reacted to the news of the Duke’s death with sadness.

For them, like many young people, his legacy is the Duke of Edinburgh award that many thousands of young people take part in every year.

“It was really fun. I just loved it. It was one of my fondest school memories of school,” Imogen said.

Antony says he was shocked to hear news, and added: “I was driving, and I had to pull over to text my whole family.

“He’s lived a good age and left a good legacy.”

PM pays tribute to the Duke of Edinburgh

Amid fears large numbers of people would gather at the royal sites, with many COVID restrictions still in place, a Cabinet Office spokesperson said: “Although this is an extraordinarily difficult time for many, we are asking the public not to gather at Royal Residences, and continue to follow public health advice particularly on avoiding meeting in large groups and on minimising travel.

“We are supporting the Royal Household in asking that floral tributes should not be laid at Royal Residences at this time.”

Prince Philip dies: What we know about Duke of Edinburgh’s funeral arrangements codenamed Forth Bridge