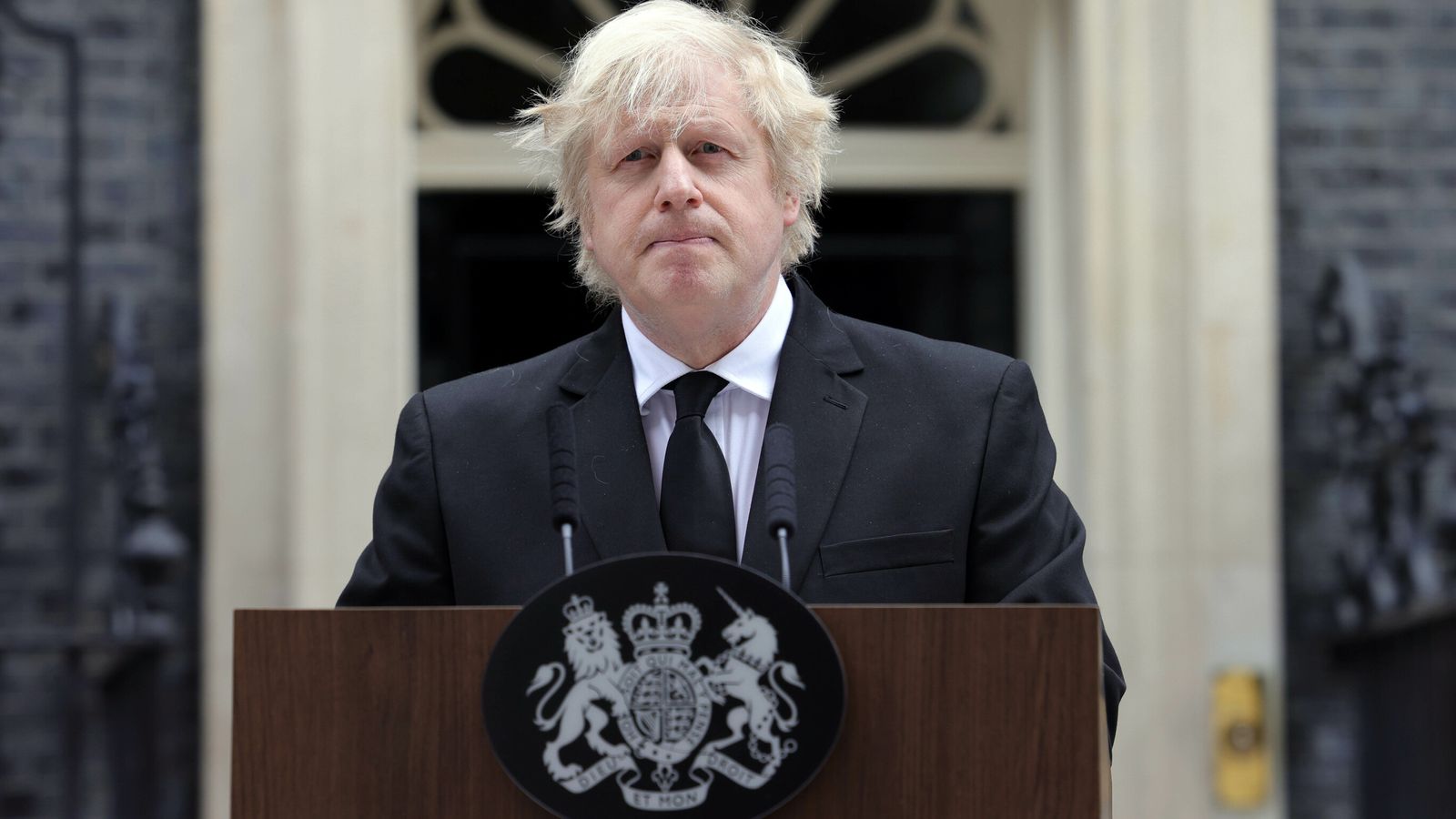 Boris Johnson has praised Prince Philip’s lifelong “ethic of service” as he led political tributes to the Duke of Edinburgh.

After Buckingham Palace confirmed the death of the 99-year-old on Friday, politicians across the UK chose to suspend their campaigning ahead of next month’s local elections.

Speaking outside 10 Downing Street, the prime minister said the duke had “earned the affections of generations” across the world.

A cabinet meeting will be held at 5pm.

The leaders of the devolved administrations in Scotland, Wales and Northern Ireland also issued tributes, as did the leaders of all the UK’s main political parties.

Parliament will be recalled a day early from its Easter recess on Monday for MPs to share tributes to the duke in the House of Commons.

Mr Johnson spoke of the duke’s service during the Second World War, his environmentalism, his work with young people and his “steadfast support” for the Queen during their 73-year marriage.

“He was the longest serving consort in history, one of the last surviving people in this country to have served in the Second World War at Cape Matapan, where he was mentioned in despatches for bravery,” the prime minister said.

“And in the invasion of Sicily, where he saved his ship by his quick-thinking and from that conflict he took an ethic of service that he applied throughout the unprecedented changes of the post war era.

“Like the expert carriage driver that he was, he helped to steer the Royal Family and the monarchy so that it remains an institution indisputably vital to the balance and happiness of our national life.

“He was an environmentalist, and a champion of the natural world long before it was fashionable.

“With his Duke of Edinburgh awards scheme he shaped and inspired the lives of countless young people and at literally tens of thousands of events he fostered their hopes and encouraged their ambitions.

“We remember the duke for all of this and above all for his steadfast support for Her Majesty the Queen.”

Mr Johnson added the nation gave thanks “for the extraordinary life and work” of the duke.

The prime minister has cancelled a visit to a pub on Monday – planned to mark the reopening of beer gardens – but there will be no change to the roadmap for easing lockdown restrictions due to the duke’s death.

The life of Prince Philip

The prime minister’s fiancee, Carrie Symonds, posted on Twitter: “So very sad to hear of the passing of HRH, the Duke of Edinburgh.

“An incredible life devoted to the Queen, his family and our country. Thoughts and prayers with Her Majesty and the Royal Family.”

Ex-prime minister John Major described the duke, a former naval officer, as “the ballast to our Ship of State”.

“Modest to the core, and hating any kind of fuss or bother, he epitomised the British spirit and remained true to himself right up to the very end,” he added.

“He will naturally be most recognised as a remarkable and steadfast support to the Queen over so many years,” he added.

“However, he should also be remembered and celebrated in his own right as a man of foresight, determination and courage.”

Theresa May, the 13th of 14 prime ministers during the Queen’s reign, said the UK and the Commonwealth “owe Prince Philip an extraordinary debt of gratitude for a distinguished life of service to the Queen, our country and so many around the world”.

Her predecessor, David Cameron, described the “honour and privilege” of being able to see “up close what a poweful advocate the duke was for the causes he believed in”.

“He showed true dedication to our country, with unstinting service stretching back to his courageous naval duty in the Second World War,” Mr Cameron added.

“He has been a huge part of our national life since long before most of us were born.”

Current Labour leader Sir Keir Starmer said the duke – who he described as an “extraordinary public servant” – would be “remembered most of all for his extraordinary commitment and devotion to the Queen”.

“Their marriage has been a symbol of strength, stability and hope, even as the world around them changed – most recently during the pandemic. It was a partnership that inspired millions in Britain and beyond,” he added.

“His quiet and steadfast counsel and support of the Queen, is perhaps his greatest if unquantifiable contribution to our nation’s history,” he said.

Scotland’s First Minister Nicola Sturgeon described the duke as an “environmentalist perhaps before that was fashionable”, but said he would be best-remembered for the Duke of Edinburgh Awards.

“None of us can not know somebody – in my case many, many people right throughout my life and time as first minister – whose prospects have been transformed by participation in that scheme,” she added.

“That is a really important and special legacy.”

Ms Sturgeon said the duke was a “bookworm” and remembered how they used to speak about the books they were reading whenever they met.

Welsh First Minister Mark Drakeford said the duke had “served the crown with selfless devotion and generosity of spirit” during his “long and distinguished life”.

Northern Ireland’s First Minister Arlene Foster described the duke as having a “strong interest” in Northern Ireland and spoke of the “privilege of meeting him on a number of his many visits here”.

She added the Duke of Edinburgh Awards was “just one example of the many charities and voluntary organisations in which he was involved in right up to his retirement from public service at the age of 96”.

Northern Ireland’s Deputy First Minister Michelle O’Neill said the past 20 years had seen “significant interventions by the British Royal Family to assist in the building of relationships between Britain and Ireland”.

“It is appropriate that this contribution to the advancement of peace and reconciliation is rightly recognised,” she added.

“To all those of a unionist tradition and of British identity – those who value and cherish the Royal Family – I wish to acknowledge the sense of loss felt.”

Irish President Michael Higgins said the duke had “served the British people with an unfailing commitment and devotion to duty”.

“In the course of his long service he frequently brought an air of informality to otherwise formal occasions,” he added.

“His distinctive presence and unique sense of humour put participants at ease and always engaged those who encountered him.”

President Higgins expressed his hope the Queen’s historic state visit to Ireland in 2011, as well as his own trip to the UK in 2014 – both of which were shared by Prince Philip – would “continue to be symbols of what we share as neighbours in friendship, peace and a sustainable future”.

Chancellor Rishi Sunak posted on Twitter: “For your humour and positivity, your years of military service, for all the young people you inspired and for the dedication to your duty, the whole nation thanks you.”

Foreign Secretary Dominic Raab said the duke would be “profoundly missed” and the Speaker of the House of Commons, Sir Lindsay Hoyle, said Prince Philip’s life “saw so much dedication to duty”.

“Described by Her Majesty as ‘my constant strength’, he served this country too, first with distinction during the Second World War and selflessly throughout eight decades during peacetime,” he added.

Norman Fowler, Lord Speaker of the House of Lords, said the duke had been a “constant inspiration to all serving in parliament”.

London mayor Sadiq Khan said the UK would “mourn the loss of an extraordinary man, who devoted his life to public service and helping others”.

European Commission President Ursula von der Leyen extended her “sincere sympathy” to the Queen, the Royal Family and the UK.

Ex-Labour leader Jeremy Corbyn, now an independent MP, was criticised on social media for the timing of a tweet at Friday lunchtime which promoted an event he is due to speak at about Bolivian politics.

He later deleted the tweet and posted: “Losing a loved one, as so many families have this past year, is always heartbreaking.

“My thoughts are with Prince Philip’s family and all who loved him.”

Prince Philip dies: Duke of Edinburgh was the Queen’s ‘strength and stay’