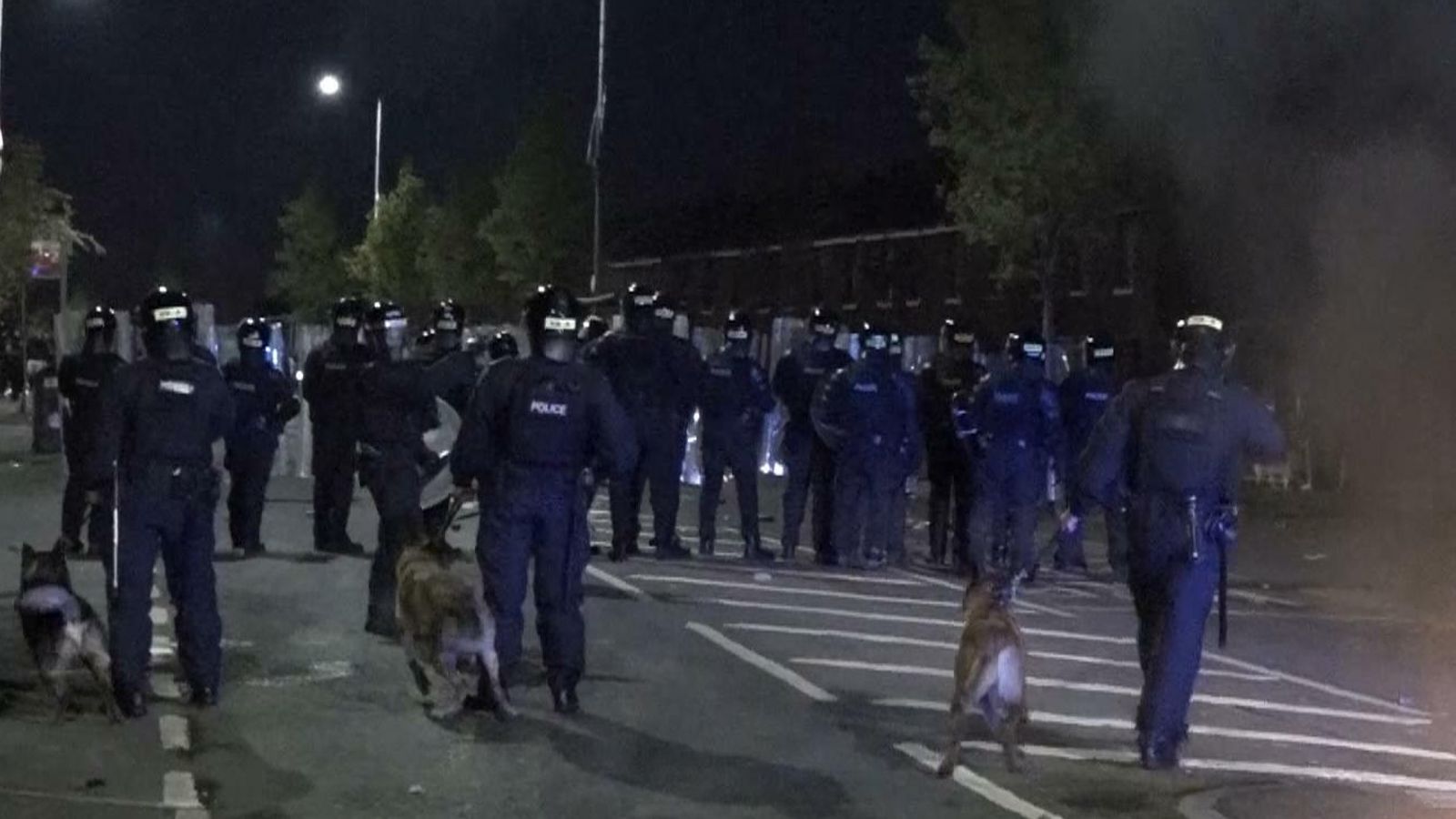 Stones, bottles and petrol bombs have been thrown at police officers on another night of unrest in Northern Ireland.

It comes despite a renewed call for calm out of respect for the passing of the Duke of Edinburgh.

A car was also seen burning in Belfast amid a heavy police presence.

Image: A sign calling for calm following the death of Prince Philip

Police have been dealing with unrest all week in Northern Ireland, prompting political leaders from across the spectrum to urge peace.

Two men have been charged following the scenes on Thursday in west Belfast, with the police saying a 24-year-old and a 32-year-old were charged with riot.

The 32-year-old was also charged with possession of a petrol bomb in suspicious circumstances.

Both the Loyalist area of Tiger Bay and the Nationalist New Lodge region of Belfast saw violence on Friday night.

Earlier, PSNI Chief Superintendent Muir Clarke said: “We would appeal for calm in the area and ask anyone who has any influence in communities, please use that influence to ensure young people do not get caught up in criminality and that they are kept safe and away from harm tonight.”

The cacophony of protest was supposed to fall silent – Eyewitness by Stephen Murphy, Ireland correspondent

The clang of smashed concrete meeting armoured Land Rover – or police helmet – has become distressingly familiar again in Northern Ireland over the past week, but tonight the cacophony of protest was supposed to fall silent.

In the hours after the death of Prince Philip, senior Loyalist activists were spotted by Sky News erecting posters at the Lanark Way flashpoint area in West Belfast. This was the scene of extraordinary violence on Wednesday night, as the gates that separate loyalist and nationalist areas (an “interface”) were smashed open and set alight. The professionally-printed posters asked that “all PUL [Protestant Unionist Loyalist] protests be postponed as a mark of respect to the Queen and the Royal Family”.

Some of those with the posters are very serious men. Their words carry weight here, and for the most part, the more hot-headed teenagers who had been protesting – or rioting – stayed home tonight.

But at North Queen Street, the message hadn’t gotten through. For several hours, police lines shifted up and down the Loyalist street as they sought to contain dozens of young men who hurled petrol bombs, glass bottles and bricks. A car was set ablaze. A tall man in a balaclava angrily ordered the media out of the area before throwing a petrol bomb at police. It seemed to fizzle out harmlessly under a Land Rover’s wheels.

White paint was splattered across walls and pavements and a purple flare was ignited, providing a colourful backdrop as a flaming wheelie bin was launched at police. The air stank of smoke and a police helicopter clattered overhead.

At the junction with Upper Canning Street, an officer in full riot gear was helped away by a colleague after sustaining an injury. He looked dazed. Under the cumbersome, heavy armour (most of the media have had riot training at police facilities), is a frail human body. It was a reminder of how 74 PSNI officers – and Daphne the police dog – have been injured so far in this grim and messy week in Northern Ireland.

And yet, compared to the last few nights, it was a relatively quiet evening across Belfast and most other parts of the province. The key word here is “relatively”. The scenes at North Queen Street alone would horrify residents elsewhere in the UK, but such is the precedent of disorder here, that many will regard tonight as a successful exercise in quelling mass violence. The question is how long any lull may last – and if the politicians that are so frequently at loggerheads can plot a way out of the myriad factors that have led us to this place.

Sir Richard Sutton: Man arrested over murder of one of UK’s wealthiest men released from hospital