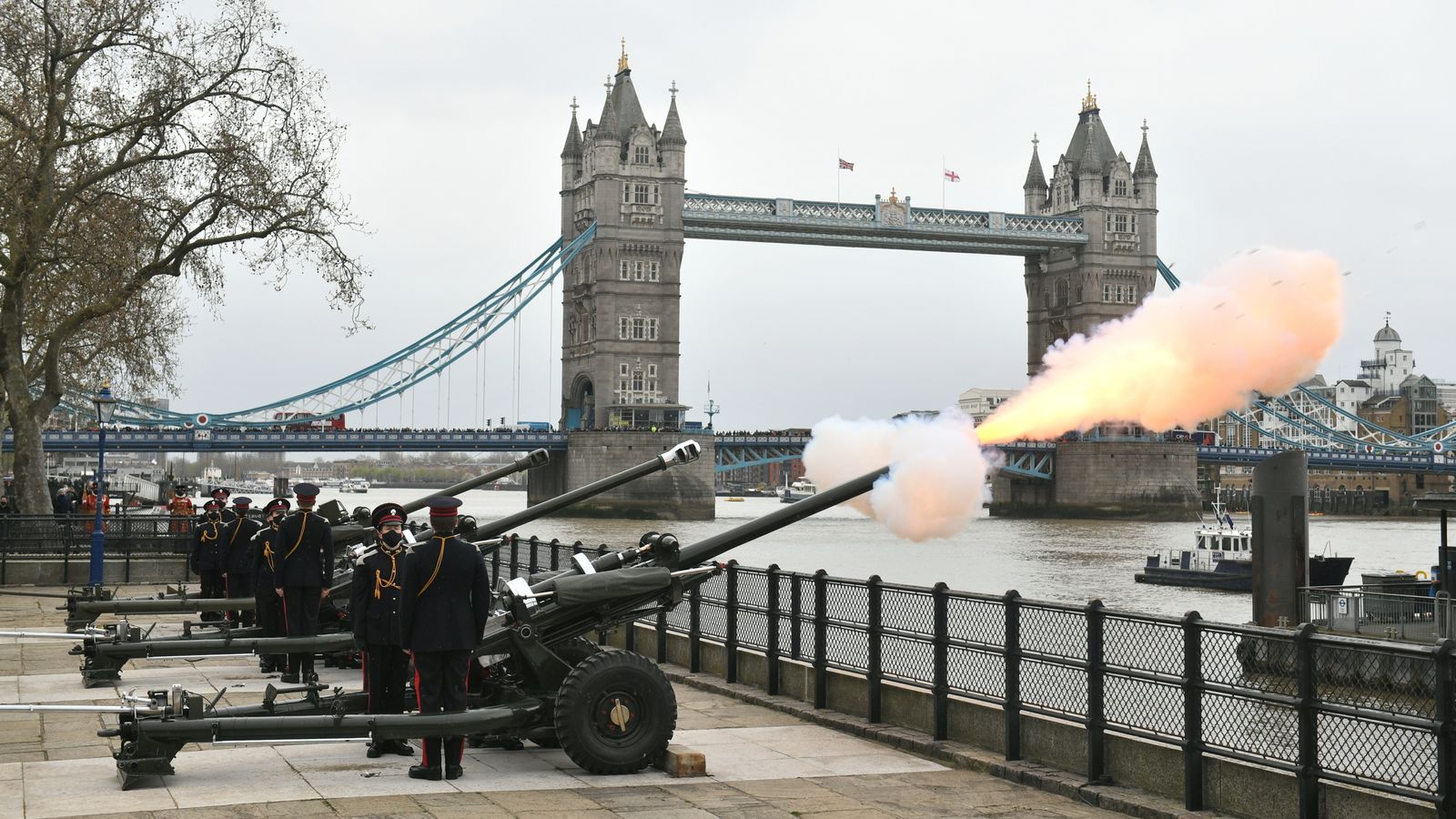 Gun salutes have been taking place across the nation to mark the passing of Prince Philip.

The Duke of Edinburgh died peacefully in his sleep at Windsor Castle on Friday, Buckingham Palace said. Saluting batteries fired 41 rounds – one per minute – from midday on Saturday in major UK cities including London, Edinburgh, Cardiff and Belfast.

Image: Members of the Honourable Artillery Company fired the 41-round gun salute at the Tower of London Image: Prince Philip in 1946 as an officer in the Royal Navy

Several Royal Navy ships, including HMS Diamond, HMS Montrose and HMNB Portsmouth, also joined in the tribute to the duke, who had served in the navy full-time for 14 years and remained closely tied with the armed forces throughout his life.

In London, rounds were fired outside the Tower of London by the Honourable Artillery Company, and at Woolwich Barracks in the southeast of the capital.

The latter involved six First World War field guns which were also fired for the duke’s wedding to the Queen and at her coronation.

Blue skies were seen at Edinburgh Castle as another salute was carried out there, while more tributes were made at the castles of Hillsborough and Cardiff.

The salutes have been broadcast online and televised to encourage the public to watch.

Image: The first shot during a gun salute at Cardiff Castle

A statement on the royal website said: “The tradition of gun salutes being fired throughout the country to mark significant national events dates back to at least the 18th century, and there are historical records of salutes taking place as early as the 14th century when guns and ammunition began to be adopted more widely.

“Similar gun salutes were fired to mark the death of Queen Victoria in 1901.”

Official flags have also been flying at half-mast around the country, including those at Buckingham Palace and Downing Street.

Members of the public have been told not to leave flowers outside the royal residences to prevent crowding, but many have still turned up in London and Windsor to pay their respects.

Image: Mourners have been leaving tributes at Windsor Castle Image: A member of The King’s Troop Royal Horse Artillery places empty shells into boxes ahead of a gun salute

Buckingham Palace announced Prince Philip’s death shortly after midday on Friday, issuing a statement saying the Queen and the Royal Family were “mourning his loss”.

It is understood the duke did not want a big fuss made for his funeral, and plans will also have to be scaled down due to the coronavirus pandemic.

It is not confirmed yet but the Queen may give a televised address in memory of her husband of more than 70 years, who she famously once described as her “constant strength and guide”.

Prince Philip dies: Tearful Countess of Wessex says ‘the Queen has been amazing’ as she leaves Windsor Castle