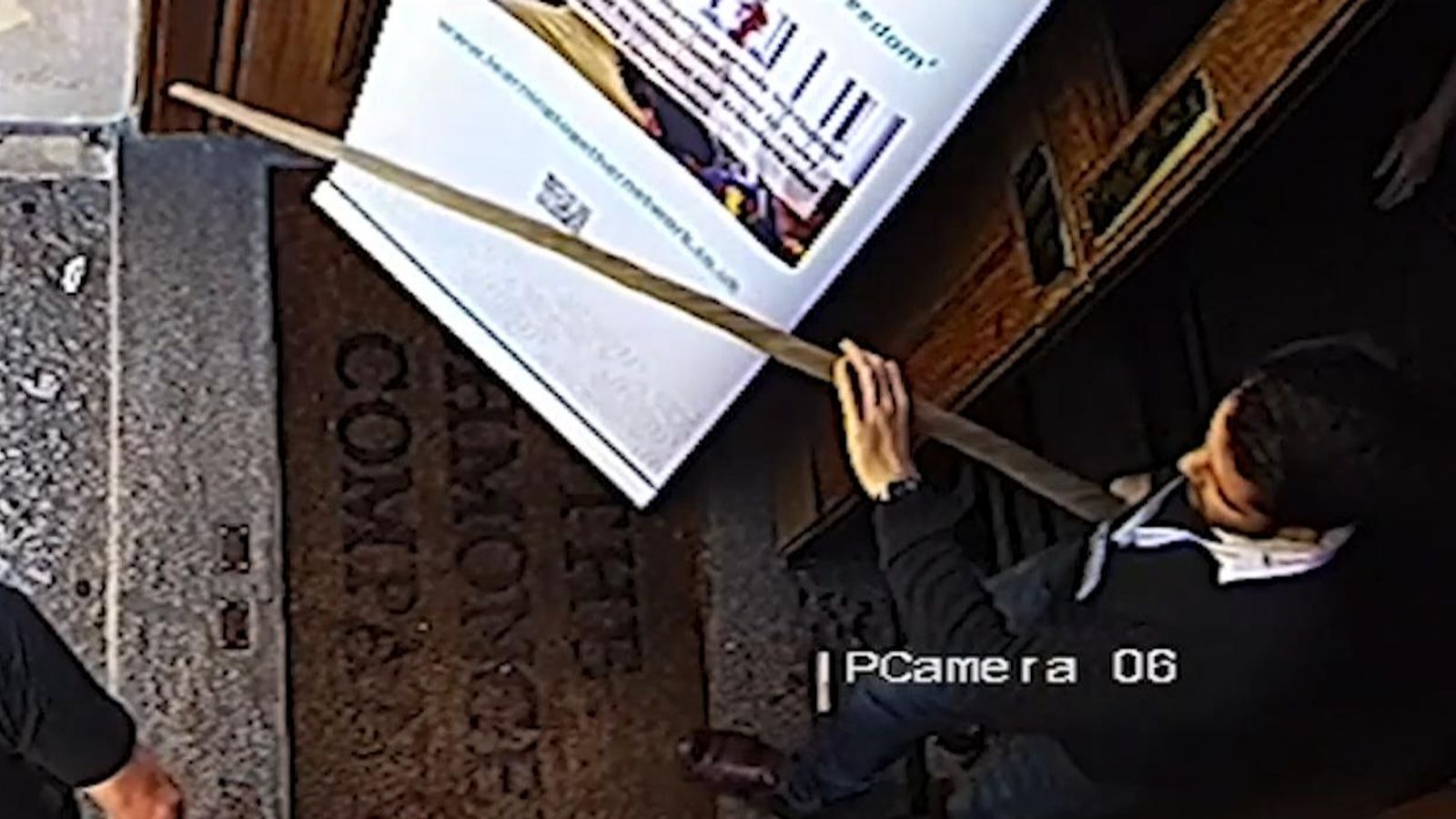 New pictures have been released of the narwhal tusk-wielding bystander who ended the London Bridge attack.

Khan, 28, who was armed with two knives and wore a fake suicide vest, was tackled by members of the public with a decorative pike, narwhal tusk and fire extinguisher, and then shot dead by police on London Bridge.

A jury inquest into the deaths of Mr Merritt and Ms Jones began on Monday, before coroner Mark Lucraft QC at Guildhall in the City of London.

Image: Usman Khan and his victim Saskia Jones are seen sharing a table at the event before the horror unfolded. Pic: Met Police

Pictures and videos released by Metropolitan Police show the moment Darryn Frost, 38, left the event with the tusk he had grabbed from the wall at Fishmongers Hall and chased Khan towards London Bridge where he eventually pinned him to the ground to help end the attack.

Darryn Frost, 38, a civil servant, has spoken in the past of his “deep hurt” at not being able to save Mr Merritt and Ms Jones.

Khan, who was shot dead by police, had earlier calmly attended the prisoner rehabilitation event – and even shared a table with his eventual victim Ms Jones.

The pictures show him arriving at the hall to register for the day, of the fake explosive device and of one of the large knives he had concealed on him.

Earlier in the inquest, the families of the victims paid moving tributes to them.

Anne Merritt, Jack’s mother, was emotional as she told the hearing her son was “a force of good in the world, someone who made other people’s lives better”.

Image: One of the two knives found on Khan after the incident. Pic: Met Police

And she read messages from people who knew her son.

Mr Merritt’s girlfriend Leanne O’Brien described their first “Masterchef” date, where he ordered “three large pizzas because two might just not have been enough” – and said she would miss his “huge, famous Jack Merritt smile”.

Image: Jack Merritt, 25, was described as having an ‘infectious smile’. Pic: Met Police

“He made me feel like it was possible to achieve anything and everything,” she said.

Mrs Merritt also read a message from Mr Merritt’s Manchester University housemates, who described him “bounding along in his black Doc Martens, and silver hoop earrings, with his infectious smile, huge bear hugs and never-ending passion for life”.

A statement on behalf of Ms Jones’s family said: “It is very important to the family that Saskia’s legacy should not solely be based on her work… as she was about so much more than just that.

“She should be defined and someone who battled to improve the lives of others.”