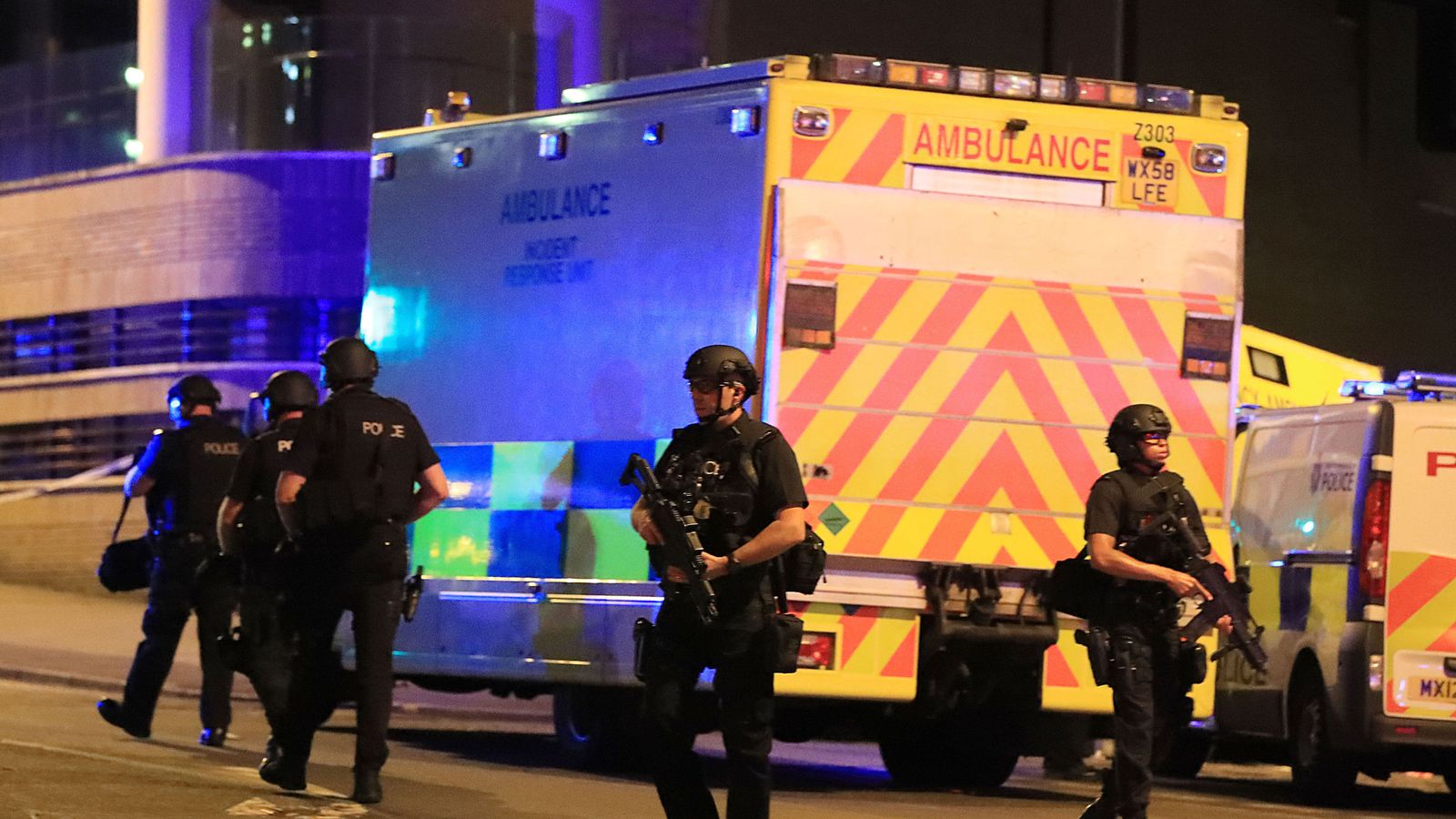 A teenager injured in the Manchester Arena bombing has described how she lay on the ground bleeding from leg injuries and told her best friend she thought she was going to die.

Lucy Jarvis, then 17, was struggling to stay conscious as she was helped by two members of staff from the arena, who stayed with her despite police demands that they leave.

She was carried down to paramedics by the two men but had to wait another two hours to be taken to hospital by which time she needed immediate life-saving intervention.

The inquiry into the attack heard from Ms Jarvis and her friend Millie Tomlinson about how they went to the Ariana Grande concert on 22 May 2017.

Image: Emergency services outside the venue

Ms Jarvis said the two girls left just as the last song finished because they did not want to get “stuck in the traffic of people getting out”.

“As she [Ms Tomlinson] was about to ring her mum the blast happened. I don’t remember hearing it, just feeling really hot, feeling loads of heat and just being on the floor.

“I looked behind me where the sound was coming from and I could see Millie get up from the floor and heading back through the doors. I don’t know how I managed to but I got up and followed her through.”

Miss Jarvis later discovered she had a bad ankle injury and doctors were surprised she was able to stand up, let alone run back into the arena.

Her friend led her up some steps back towards the seats they had been in where they sat on the ground outside the toilets.

“I remember thinking, ‘Am I going to die?’ because my vison was so blurry, it was like flash visions.

“I’d never experienced anything like that before so I said to Millie, I was like, ‘Am I going to die? Has something happened? I don’t know if I’m going to survive’.”

Ms Tomlinson could not get her phone to work so she used Ms Jarvis’s to ring Lucy’s father as John Clarkson and Paul Worsley, two workers from arena operator SMG came to help the girls.

“After that I just blanked,” she said. “I just remember being on the concourse floor with these two men. I remember being with Millie and the next minute I wasn’t.”

Image: Police at scene after Manchester Arena bombing on 22 May 2017

Mr Clarkson and Mr Worsley were sitting on the floor next to her trying to keep her talking and getting her to squeeze their hands.

“I remember seeing people walk past me and a few people bandaging me and my arms and saying ‘it’s bleeding through already’. I was in shock that I had another injury I didn’t know about.

“I didn’t see the injury on my arm properly because I had a denim jacket on. I could just see the ones on my legs.

“I remember them holding my hands. They said, ‘if you feel like you’re going to go to sleep squeeze my hand.’ In my head I was thinking, they think I’m going to die.”

At one point armed police came and tried to persuade the two SMG workers to leave Miss Tomlinson on her own.

“I remember them saying they needed to leave and paramedics would take over but they said, ‘I’m sorry we’re not leaving her on her own’ because they didn’t know how long it would be.”

They eventually got her onto an ambulance stretcher and wheeled her back through the foyer and down to the station concourse where the paramedics were triaging patients.

But paramedics gave her an orange card, meaning she was not deemed the most urgent casualty.

“I remember being there for what felt like a long time. I remember people talking around me or crying or shouting for pain relief.

“At this point I remember pain coming through from different injuries. My stomach really hurt me and I asked John for paracetamol because I thought that would cure it.

“Both my feet were throbbing really badly. I asked John to take my shoes off. He said ‘we can’t take your shoes off’.

“I would probably have bled to death. If he had taken my shoes off I probably wouldn’t be here.”

After nearly two hours on the train station floor, Miss Tomlinson was sick on John Clarkson’s shoes and he called someone over and they changed her to priority red straight away.

“They took me outside and put me in an ambulance pretty much straight away,” she said.

She was taken to Salford General Hospital, sent for a scan and then straight into the operating theatre where she remained for the next 14 hours. She was in hospital for the next eight weeks.

She had multiple shrapnel injuries to her upper and lower legs and had to have a fasciotomy on her right leg to stop the swelling.

There was an injury to her femoral vein, vascular system and right thigh and she almost lost her leg.

She had shrapnel in her left ankle, a partially severed toe, and had a metatarsal removed, leaving her with a fixator on the bone for 10 months.

A piece of shrapnel went through her bladder and another damaged her lower kidney, bowel and severed her urethra.

She had injuries to her upper arms, forearms and thumb and blood clots on her lungs due the blast.

Praising the medical attention she got, Miss Jarvis said: “They were amazing, I can’t thank them enough. Every member of staff was so caring and thoughtful I just have to thank them so much.”

Salman Abedi killed 22 men, women and children when he blew himself up in a suicide bomb attack at the end of an Ariana Grande concert in May 2017.

COVID-19: Remaining England university students cannot return to campus until 17 May ‘at the earliest’