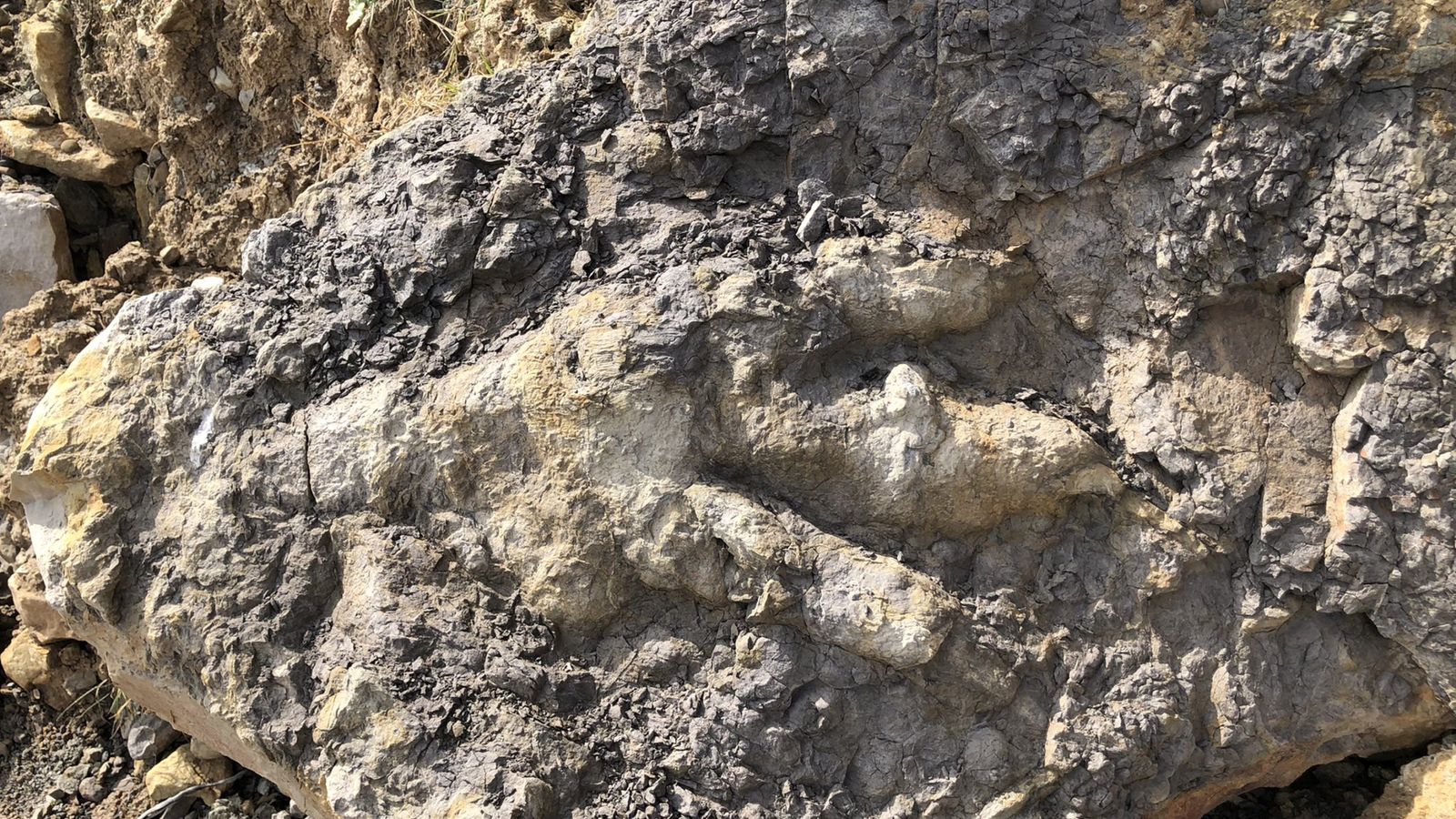 A footprint made by a large meat-eating dinosaur described as a “real Jurassic giant” has been discovered on a Yorkshire beach.

The fossilised print was spotted by archaeologist Marie Woods who was collecting shellfish.

Experts believe it was made by a dinosaur with a possible body length of eight to nine metres, matching the print of a Megalosaurus, which lived between 175 and 164 million years ago.

Image: Ms Woods was collecting shellfish when she spotted it

Ms Woods said she was shocked to stumble across the huge print. Now she is hoping it will be possible to save it before it is washed away.

“I was grabbing some shellfish for dinner. I didn’t collect much after seeing that,” she said.

“It’s in a fragile state and sits close to the water level, meaning it could be lost to the sea.

“John Oxley [former city archaeologist of York] came to take a series [of] photographs so that we could create a 3D model if collection isn’t possible.”

Following her discovery, at a location which is being kept secret, Ms Woods contacted specialists including palaeontologist Dr Dean Lomax, the author of Dinosaurs of the British Isles.

Dr Lomax said Ms Woods’s discovery turned out to be a rediscovery, as it had been partially spotted by fossil collector Rob Taylor back in November 2020.

Despite Mr Taylor posting pictures of his find in a Facebook group dedicated to fossils from Yorkshire, the fossil was not yet fully exposed and nobody had realised its true importance.

Image: It is the largest dinosaur footprint found in Yorkshire

Dr Lomax, who grew up hunting for fossils on the Yorkshire coast and has written extensively on dinosaur finds, said: “This is the largest theropod footprint ever found in Yorkshire, made by a large meat-eating dinosaur.

“We know this because the shape and three-toed track, along with the impression of the claws, are absolutely spot-on for having been made by a large theropod that probably had a hip height of about 2.4 metres and possible body length approaching eight to nine metres – so a real Jurassic giant.

“We can never be certain of exactly what species made it, but the footprint type would match the likes of a dinosaur found in Britain and called Megalosaurus, which lived at roughly the same time this footprint was created, during the Middle Jurassic.”

He added: “Yorkshire’s coast is world renowned for its dinosaur tracks, primarily through research by Dr Mike Romano and Dr Martin Whyte, who spent around 20 years researching and discovering hundreds [to] thousands of tracks.”