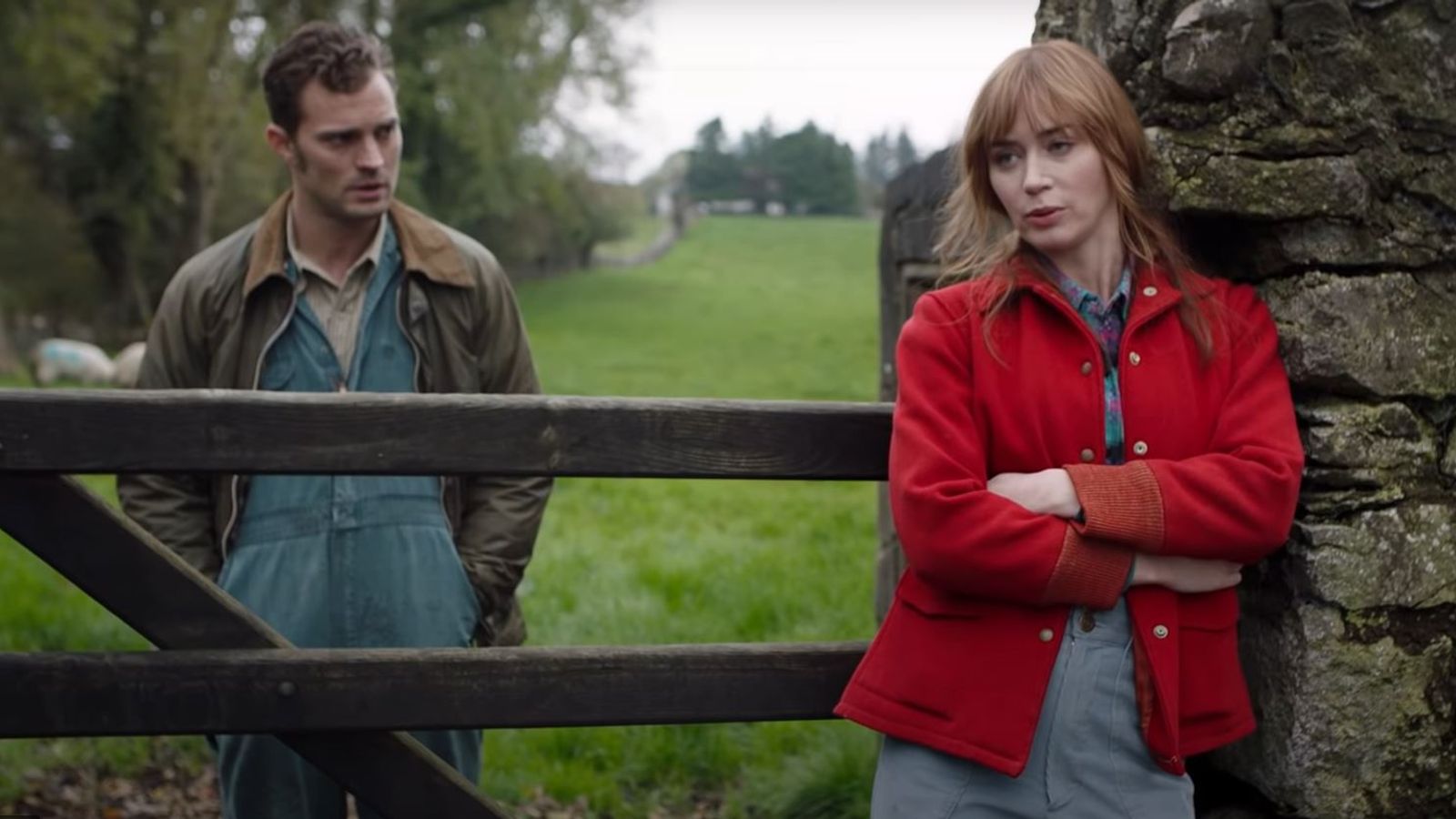 The trailer for romcom Wild Mountain Thyme went viral last year after the film was widely mocked on social media for its Irish clichés and the stars’ accents.

Rather than gushing over the beautiful landscape or the touching love story at the film’s heart, all anyone could talk about was the thick Irish brogue rolled out across the teaser.

However, the film’s leading stars Emily Blunt and Jamie Dornan aren’t too worried, telling Sky News they’re “not going to lose any sleep” over the mocking.

“It’s kind of par for the course, I’m from Ireland and we’re known for taking the p*** pretty much out of everything – it almost comes with the territory,” said Dornan. “I think that’s fine, and at the end of the day, everyone’s going to have their opinion. We are doing the accents that we planned to do.”

The 38-year-old actor, who is from Northern Ireland, went on: “There’s so many dialects based on a very small island and I get the p*** taken out of me for the way I sound all the time, just as me. A lot of people don’t understand me all the time, and that’s fine. That’s something I’ve dealt with my whole life.”

British star Blunt, who now lives in the US, said: “I think it was sort of to be expected in some ways, I think we all knew it on the day. We’re neither of us from that part of the world. And so ultimately, when you’re doing an accent, you just do your best.

“Luckily, this film is not really about accents, it’s about something much bigger than that. So, I think we all took it fairly lightly. I just want people to go and see it now and be transported to the fact that this is really a love letter to Ireland.

“We loved doing it, we loved being in Ireland, we loved the Irish people. So, I think the p***-taking from Irish people about people who aren’t from Ireland playing Irish, I sort of shoulder shrug about it really.”

Set in Mullingar, a small market town in the county of Westmeath, Wild Mountain Thyme tells the story of a romance intertwined with a family dispute over a farm.

Blunt plays Rosemary, a woman looking for love, while Dornan is sultry farmer Anthony – a man who rivals Pride And Prejudice’s Mr Darcy in the romantic ineptitude stakes.

Based on John Patrick Shanley’s Broadway play Outside Mullingar, the US playwright and screenwriter – who is perhaps best known for Cher’s romantic drama Moonstruck – also directs the film.

Dornan said that ahead of filming, Shanley, whose father was from Ireland, advised the actors that if they “sounded anything like the real people [the film’s] based on, nobody would understand”.

Dornan went on: “So, we’re trying to find accents that everyone in the world will understand and that’s what we feel we did. We’re not going to lose any sleep over some people having a bit of fun with it.”

Aside from questionable accents, the film is about the slow rekindling of a first love, with Blunt saying the script “bewitched her” when she first read it.

The 38-year-old actress said it’s that “fairy-tale quality” she hopes people will take from it.

And while it may be a romance, both stars insist they were disastrous when it came to love in their own early years.

Dornan, who is married to musician Amelia Warner, says like Blunt he was far from a hit with the opposite sex: “A lot of swing and misses for me, I think most people have that history, don’t they?

“I can relate a bit to Anthony’s lack of ability to see what’s in front of him and what’s good for him. He’s a bit in his own mind about all that and his own confidence.

“I definitely was someone who struggled with confidence with girls when I was a kid. I definitely had a lot of girls that I really liked who definitely didn’t like me back. At least [Anthony] has someone who really wants him back, he just can’t see it.”

Wild Mountain Thyme, starring Emily Blunt, Jamie Dornan, Jon Hamm and Christopher Walken, is released on all major UK digital platforms from 30 April, and in cinemas in the Republic of Ireland in the summer