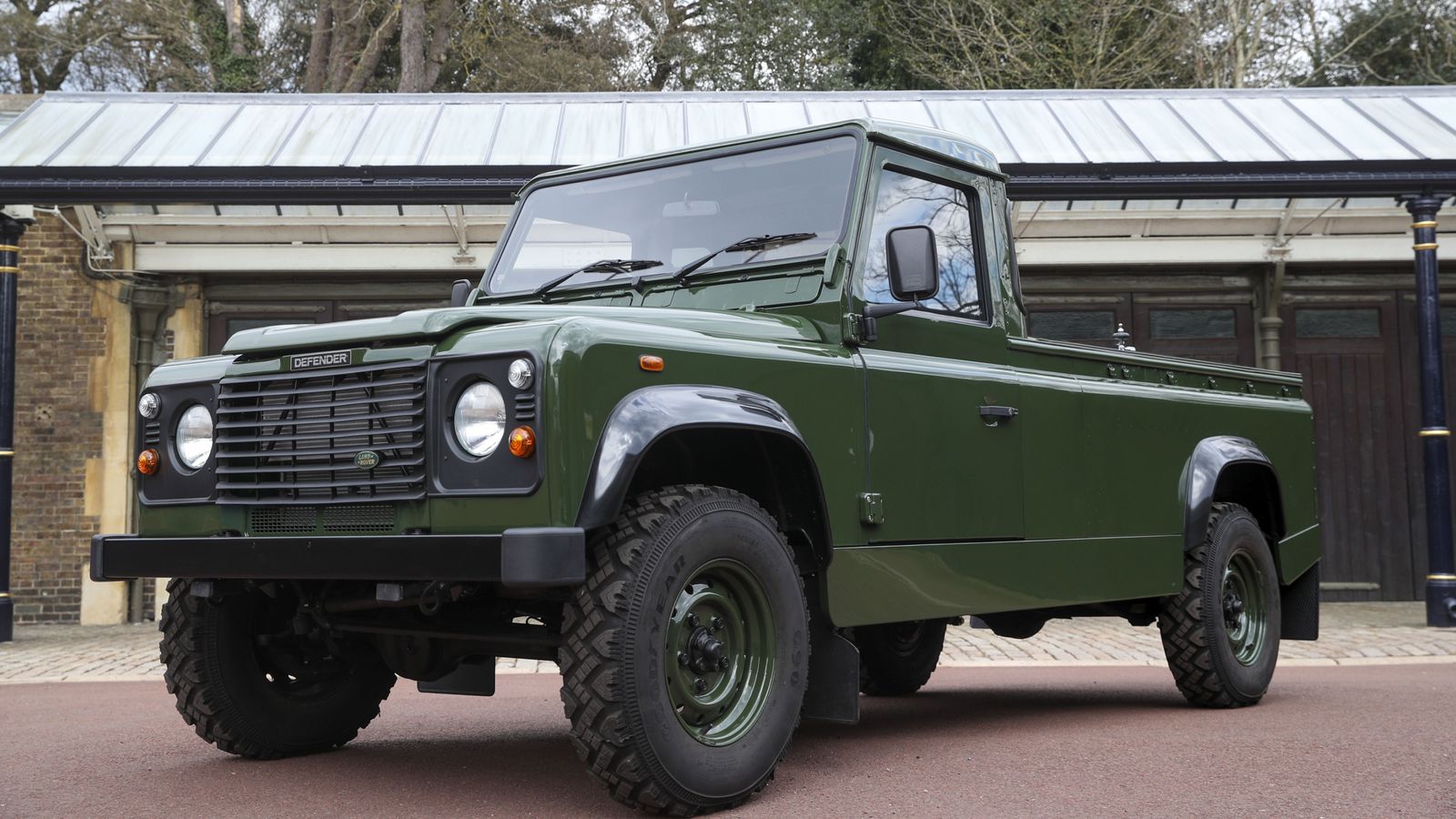 Details handpicked by the Duke of Edinburgh for his funeral have been revealed ahead of the ceremony in two days’ time.

Prince Philip designed his own custom-built Land Rover hearse for the occasion, and the project spanned 16 years with the duke making changes including requesting a repaint in military green.

He also came up with the open top rear and special “stops” to secure his coffin in place.

Image: Tributes have been paid after Prince Philip died on Friday

He first began the long-lasting venture to create the bespoke hearse in collaboration with Land Rover in 2003, the year he turned 82.

Prince Philip, who died aged 99 at the castle last Friday, made the final adjustments to the vehicle in 2019, the year he turned 98.

The Defender was made at Land Rover’s factory in Solihull in 2003 and Philip oversaw the modifications, in collaboration with the company, throughout the intervening years.

The duke, who served with distinction in the Second World War and held special associations with all the armed forces, requested that the original Belize Green bodywork be switched to Dark Bronze Green, a colour used for many military Land Rovers.

Watch live coverage of Prince Philip’s ceremonial funeral service on Sky News, the website and app from 12.30pm on Saturday.

The polished sturdy, utilitarian vehicle, with its heavy-duty wheels and angular structure, stands as a showcase for the duke’s practical nature, and his passion for functional design and engineering.

He also designed the open top rear section where his coffin will rest, made to his exact specifications, including the rubber grips on silver metal pins known as the “stops” or “stoppers” which perform the crucial task of preventing the coffin from moving.

Thierry Bollore, Jaguar Land Rover’s chief executive, said the company were “deeply privileged to have enjoyed a very long and happy association with the Duke of Edinburgh over many decades”.

The vehicle will finally be used for its intended function on Saturday.

Image: The duke is pictured driving a Land Rover, with the Queen in the grounds of Windsor Great Park in 1955. Pic: AP

The vehicle will take Philip’s coffin in a slow procession from the state entrance of Windsor Castle through the grounds to the west steps of St George’s Chapel, followed by the Prince of Wales and other members of the Royal Family on foot.

It will be flanked by pall bearers reflecting the duke’s special relationships with the military, the Royal Marines, Regiments, Corps and Air Stations.

Originally, the Land Rover would also have transported the duke 22 miles from Wellington Arch in central London to Windsor, but the coronavirus pandemic curtailed the long-held plans for military parades in honour of Philip through the streets of both the capital and the Berkshire town.

The plans for Philip’s funeral – codenamed Forth Bridge – have been in place for many years, and were updated and reviewed regularly by Buckingham Palace staff in consultation with the Queen and the duke.

The duke’s decades-long love affair with Land Rover was so strong that two additional Land Rovers were made for “belt and braces” in case a backup was needed.

It comes as details of the military medals handpicked by the duke to appear on the altar inside the chapel were revealed for the first time.

Image: The Order of Merit, the Royal Victorian Chain and full size Medal Group, sewn onto a cushion in St James’s Palace

Philip’s chosen insignia, the medals and decorations conferred on him by the UK and Commonwealth countries – together with his Royal Air Force wings and Field Marshal’s baton, will be pre-positioned on nine cushions on the altar in St George’s Chapel.

The duke also included insignia from Denmark and Greece – Order of the Elephant and Order of the Redeemer respectively – in a nod to his birth heritage as a Prince of Greece and Denmark.

Insignia, orders, decorations and medals are a way of a country saying thank you and recognising someone’s achievements.

Among the chosen pieces are the Order of the Garter which consists of a collar made out of 22 carat gold, a badge with Saint George slaying the dragon known as the greater George, a sash with a badge called the lesser George, a breast star with the motto of the order, “Honi soit qui mal y pense”, which translates as “Evil to him who evil thinks”, and the garter itself.

The Order of Merit is restricted to 24 members and is awarded in recognition of outstanding service in the armed forces, science, literature, art and the promotion of culture.

One particular cushion has the Field Marshal’s baton – the most senior appointment in the British Army – next to Philip’s RAF wings.

Image: Cushions with the Duke of Edinburgh’s insignia sewn into place

Insignia on display from across the Commonwealth will include the Order of Australian Knight, Order of New Zealand, Order of Canada, Canada Order of Military Merit, Papua New Guinea Order of Logohu, Zanzibar Brilliant Star of Zanzibar, Brunei Esteemed Family Order, and Singapore Order of Darjah Utama Temasek.

Stephen Segrave, Secretary of the Central Chancery of the Orders of Knighthood, said: “There will be nine cushions with insignia placed on pre-positioned around the altar at St George’s Chapel in Windsor.

“They represent British and Commonwealth orders and decorations, and the final cushion with orders from Greece and Denmark, for obvious reasons.

“The Duke of Edinburgh had, I think, 61 decorations and awards from 53 different other countries, and there simply just wasn’t the space to have them all on display at the funeral.”