Prince Philip: Prince Edward and Sophie read tributes left with thousands of flowers at Windsor ahead of Duke of Edinburgh’s funeral 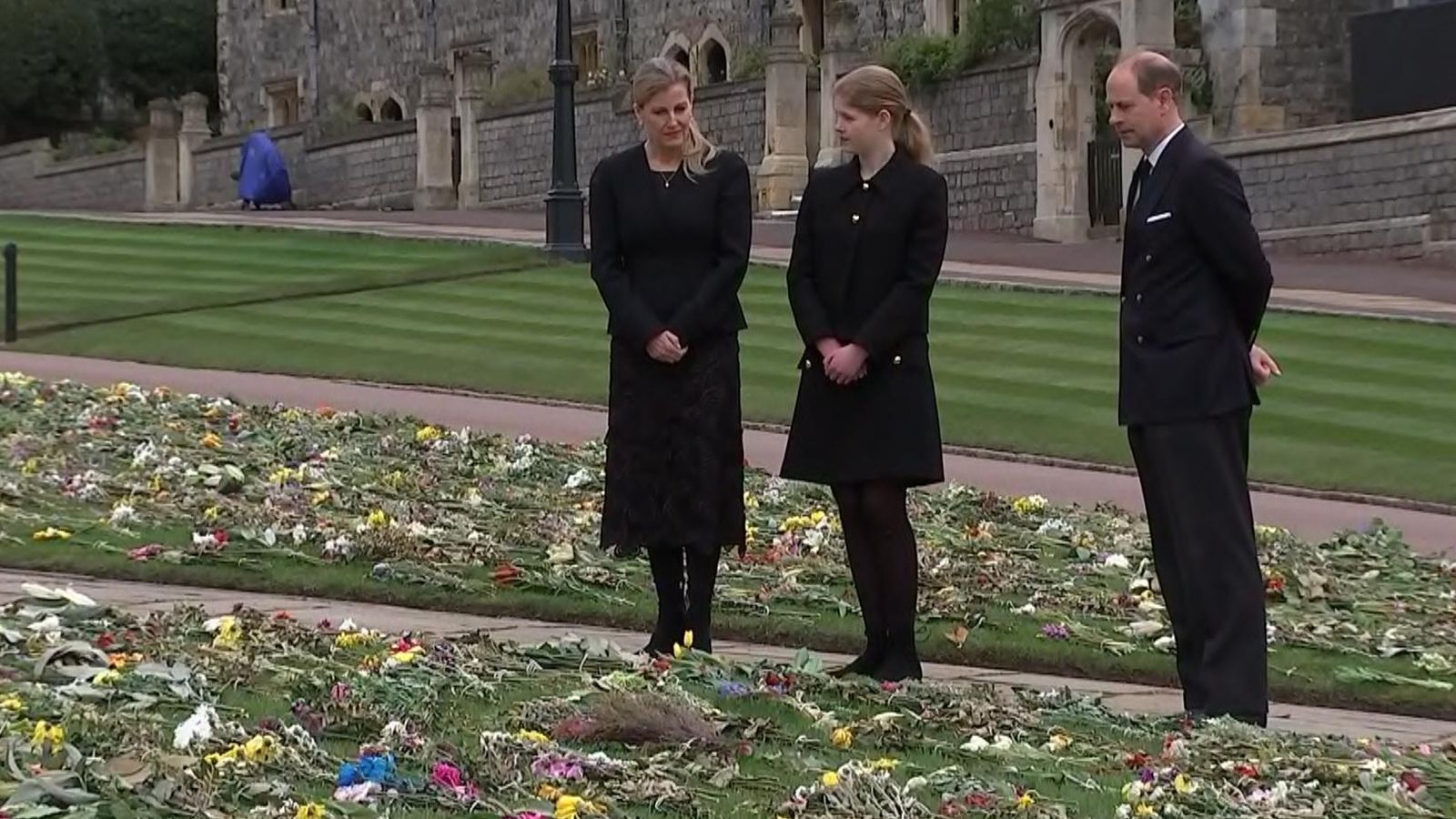 The Earl and Countess of Wessex have been to view the flowers and tributes left at Windsor ahead of Prince Philip’s funeral on Saturday.

It comes after the Prince of Wales and the Duchess of Cornwall visited Marlborough House in central London to see the tributes gathered there.

Prince Edward, the youngest son of the Duke of Edinburgh and the Queen, and his wife Sophie were in Windsor the day ahead of his father’s funeral.

The couple viewed the flowers outside St George’s Chapel, which is within the walls of Windsor Castle.

They were joined by their daughter, Lady Louise Windsor, 17.

While reading through letters from children, Sophie could be heard saying “how sweet” before turning to her husband.

Among the tributes were those sent by Prime Minister Boris Johnson, Scotland’s First Minister Nicola Sturgeon and the Royal Navy.

Prince Philip served in the navy in the Second World War, and was associated with it for most of his life.

The public have been urged not to head to the Berkshire town on Saturday, as the funeral proceedings will be taking place entirely within the castle perimeter.

Only 30 people will be attending the funeral service inside the chapel due to COVID restrictions.

He was married to the Queen for more than 70 years, with their wedding taking place at Westminster Abbey in 1947.

The day after his death, Sophie told Sky’s royal correspondent Rhiannon Mills how “the Queen has been amazing” following the passing of Prince Philip.

Under plans first outlined in 1999, Prince Edward will eventually take on the title of Duke of Edinburgh.

Earlier this week he paid tribute to his father, and thanked those who had taken part in the Duke of Edinburgh Award scheme for their kind words.

Edward said: “Reading just some of the wonderful memories you have shared about your experiences of the Duke of Edinburgh’s Award and, in some cases, of meeting my father, has been truly uplifting.

“I think I may have said once that he was a man that once met, never forgotten. He had a unique ability to make a lasting impression in a remarkably short time.

Image: Prince Edward, the Earl of Wessex, will be part of his father’s funeral procession

“I, like all my family, have a lifetime of lasting impressions, inspiration, shared passions and love. He may have departed this world, but his spirit and ethos lives on through his award, through each and every life touched, transformed, inspired; then, now and in the future.

“Thank you one and all for helping to create such an extraordinary tribute.”