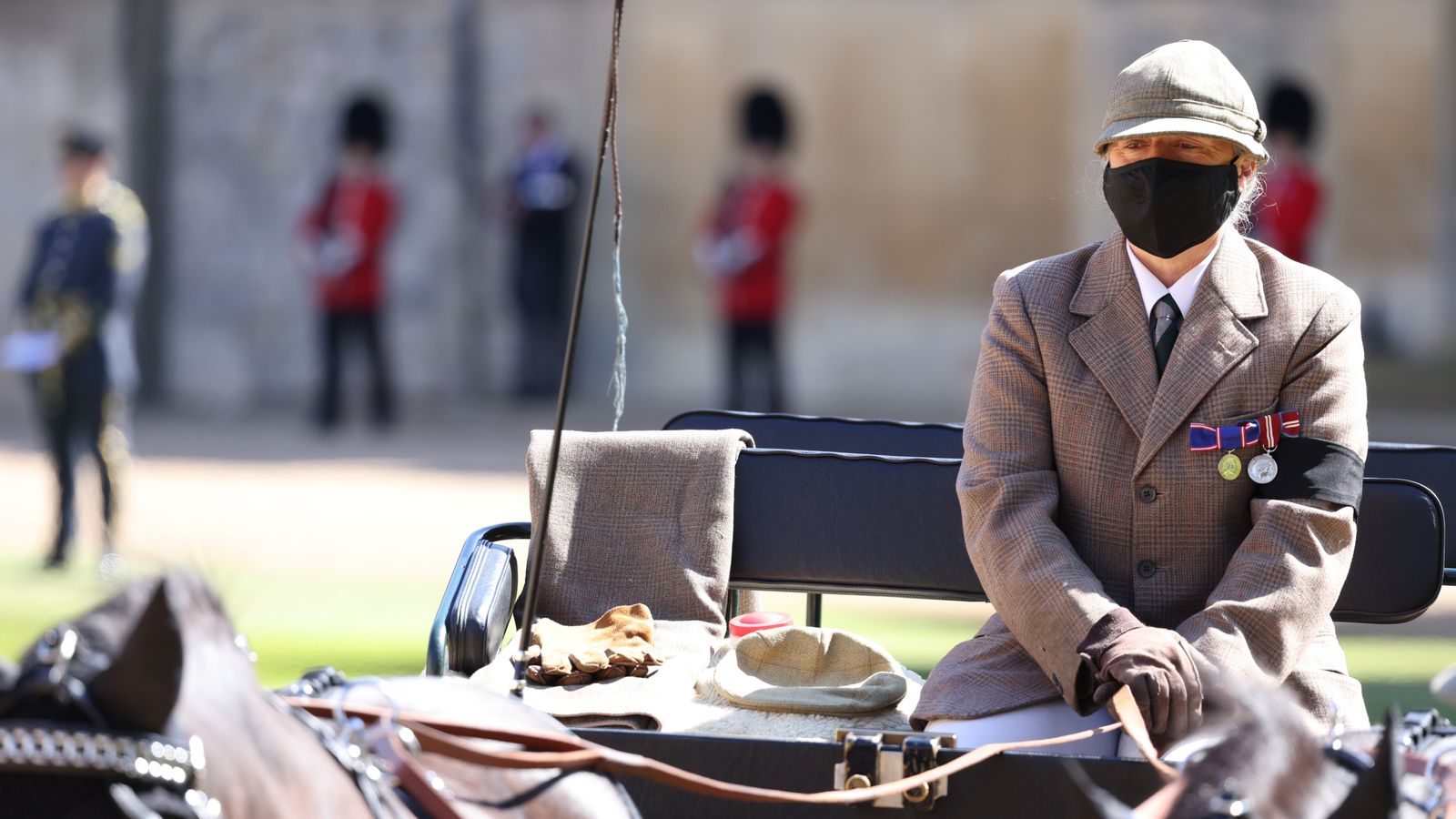 The event, which was limited to a 30-strong congregation due to coronavirus restrictions, had been “meticulously planned” over a quarter of a century, according to the Archbishop of Canterbury.

The Most Rev Justin Welby told Sky News the Duke of Edinburgh “didn’t want a fuss” and “knew exactly what he wanted” in the service.

Here, Sky News looks at how Philip left his mark on his funeral in Windsor, where the Queen said a final farewell to her husband of 73 years.

Image: The Duke of Edinburgh has been laid to rest after his death aged 99

Philip’s four-wheeled carriage was parked so it was passed by the funeral procession, with the duke’s cap, whip and brown gloves laid neatly on a folded blanket on the seat.

It also contained a small red pot used to store sugar lumps which Philip would give to his ponies after carriage driving.

On Saturday, the carriage was pulled by Fell ponies Balmoral Nevis and Notlaw Storm ahead of the funeral.

Philip was synonymous with carriage driving and had been designing the vehicles since the 1970s.

In a book he wrote about the sport, Philip said: “I am getting old, my reactions are getting slower, and my memory is unreliable, but I have never lost the sheer pleasure of driving a team through the British countryside.”

A sword atop Philip’s coffin

Image: A naval sword was placed on top of Philip’s coffin . Pic: AP

A naval sword, gifted to Philip by King George VI when he married Princess Elizabeth in 1947, was placed on top of the duke’s coffin as it was carried into the chapel.

The coffin was also covered with a wreath, naval cap and the duke’s personal standard.

It was one of several details which reflected the royal’s naval career and lifelong association with the armed forces.

Image: Members of the Royal Family walk behind the Land Rover carrying the duke’s coffin

Philip designed his own custom-built Land Rover to carry the coffin at his funeral.

The duke first began the long-lasting venture to create the bespoke hearse in collaboration with Land Rover in 2003, the year he turned 82.

He made the final adjustments to the vehicle in 2019, the year he turned 98.

The Defender was made at Land Rover’s factory in Solihull in 2003 and Philip oversaw the modifications, in collaboration with the company, throughout the intervening years.

The duke requested that the original Belize Green bodywork be switched to Dark Bronze Green, a colour used for many military Land Rovers.

The duke’s love of the sea

Image: Members of the Royal Marines and the Foot Guards line the route of the procession

Philip’s love of the sea and lifelong association with the Royal Navy featured at his funeral.

Sailors and Royal Marines were part of the 750-strong military presence which paid their respects to Philip in the grounds of Windsor Castle.

In the lead-up to the funeral service, detachments drawn from units which had a link with Philip were positioned on the grass in the Quadrangle.

The duke’s coffin was carried by Royal Marines up the steps of St George’s Chapel.

Image: The duke’s coffin was carried by Royal Marines up the steps of St George’s Chapel

Music at the funeral, chosen by Philip, included the hymn Eternal Father, Strong To Save – traditionally associated with seafarers and the maritime armed services.

Philip joined the Navy after leaving school and in May 1939 enrolled at the Royal Naval College in Dartmouth, where he rose rapidly through the ranks.

His flourishing naval career came to an end in 1951 when he stepped down from his active role in the forces to fulfil his duty as the Queen’s consort when she acceded to the throne the following year.

Image: The duke chose insignia and medals to feature at his funeral

Military medals handpicked by the duke featured inside the chapel at his funeral.

Philip’s chosen insignia, the medals and decorations conferred on him by the UK and Commonwealth countries – together with his Royal Air Force wings and Field Marshal’s baton, were pre-positioned on nine cushions on the altar.

The duke also included insignia from Denmark and Greece – Order of the Elephant and Order of the Redeemer respectively – in a nod to his birth heritage as a prince of Greece and Denmark.

Image: Insignia belonging to Philip were placed on the altar in St George’s Chapel

Insignia on display from across the Commonwealth included the Zanzibar Brilliant Star of Zanzibar, the Brunei Esteemed Family Order and the Singapore Order of Darjah Utama Temasek.

Insignia, orders, decorations and medals are a way of a country saying thank you and recognising someone’s achievements.