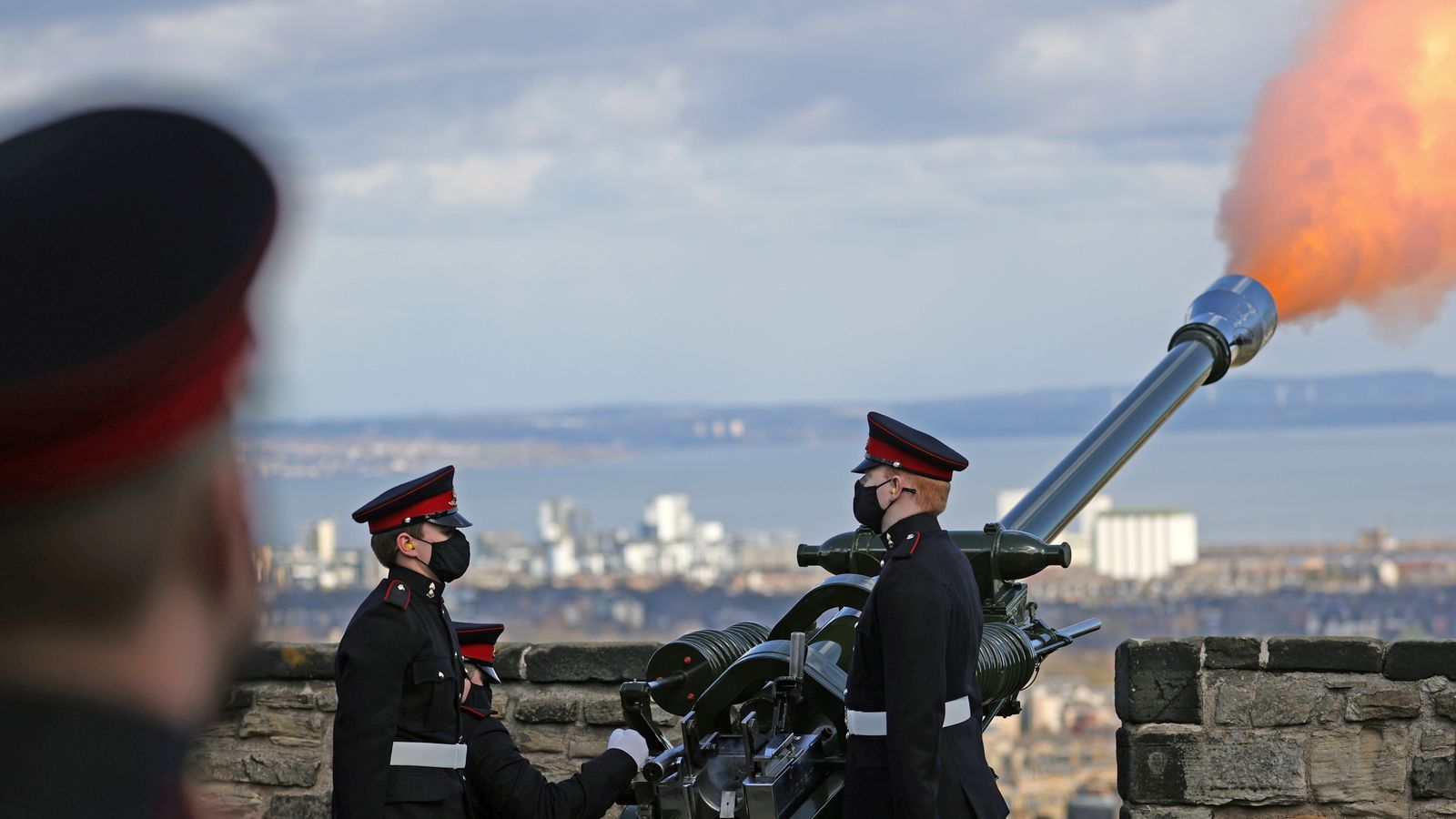 The United Kingdom fell silent for a minute of reflection ahead of Prince Philip’s funeral on Saturday afternoon.

The King’s Troop Royal Horse Artillery fired a gunshot to signal the start of the silence at St George’s Chapel, Windsor Castle, at 3pm.

Members of the Royal Family fell silent and people across the country – including Prime Minister Boris Johnson – did the same.

There were gun salutes by royal regiments at sites including at Hillsborough Castle in Northern Ireland, Cardiff Castle in Wales, Edinburgh Castle in Scotland, and Royal Navy ships in Portsmouth, Devonport, and overseas.

Hundreds of people also fell silent outside the gates of Windsor Castle and outside Buckingham Palace in London.

Mr Johnson observed the silence while watching the funeral on television from his country residence in Chequers.

Northern Ireland First Minister Arlene Foster observed the silence from Enniskillen Castle in County Fermanagh, while her Scottish counterpart Nicola Sturgeon paused on the steps of Bute House in Edinburgh.

Welsh First Minister Mark Drakeford, who sent a flower wreath to the duke’s funeral on behalf of the people of Wales, also marked the silence.

Pupils at Gordonstoun School in northern Scotland marked the silence, standing on the south lawn in memory of the school’s most famous former pupil.

The prince arrived at the school in 1934 as a 13-year-old, going on to spend five years there as a boarder.

The school bell tolled to mark the start of a minute’s silence and a piper marked its end: standing on the roof by the school’s flag at half mast, 17-year-old student John Prendergast played Flowers Of The Forest.

Earlier, he had played the same tune on Hopeman Harbour wall, as pupils laid a wreath in the Moray Firth, where the Duke of Edinburgh learned to sail as a teenager.

At Hillsborough Castle in Northern Ireland, two rounds were fired marking the beginning and end of the silence.

Castle staff tweeted a photo of flowers beneath a tree planted by Prince Philip in 1949 during the first of his many visits to the site.

Image: Drinkers at the Duke of Edinburgh pub in Hull were silent

In England, a pub sharing the prince’s name (the Duke of Edinburgh pub in Hull), a Liverpool naval club, and the National Memorial Arboretum in Staffordshire were among the places observing the minute’s silence in his memory.

A minute’s silence around the UK Image: The ninth bell at Blackburn Cathedral was tolled by Ray Hutchings

The ninth bell at Blackburn Cathedral was tolled with a half muffle by Ray Hutchings of the Lancashire County Association of Change Ringers.

The bell, cast in 1949, and weighing almost a tonne, had been fitted with a leather muffle on one side of the iron clapper, creating a sound of alternate loud and quiet rings.

Traditionally, a full muffle, with leather fitted to both sides of the clapper, is reserved for the death of the monarch.

Image: Residents at the Hillbury Care Home in Wrexham watched the funeral

In Wales, residents at the Hillbury Care Home in Wrexham are living with dementia but staff said many were aware of the day’s significance.

They told Sky News they had spoken during the week of the sadness they feel and of their support for the Queen.

One of the residents said: “I’ve seen the Queen. Very sad. Very sad.”

At sports grounds, players observed a silence before the Sky Bet Championship match at the City Ground, Nottingham, between Huddersfield Town and Nottingham Forest.

A huge image of the duke was shown before the Sky Bet League One match between Charlton and Ipswich at The Valley in London.

Snooker players and spectators at the World Championships in Sheffield also paused at 3pm.