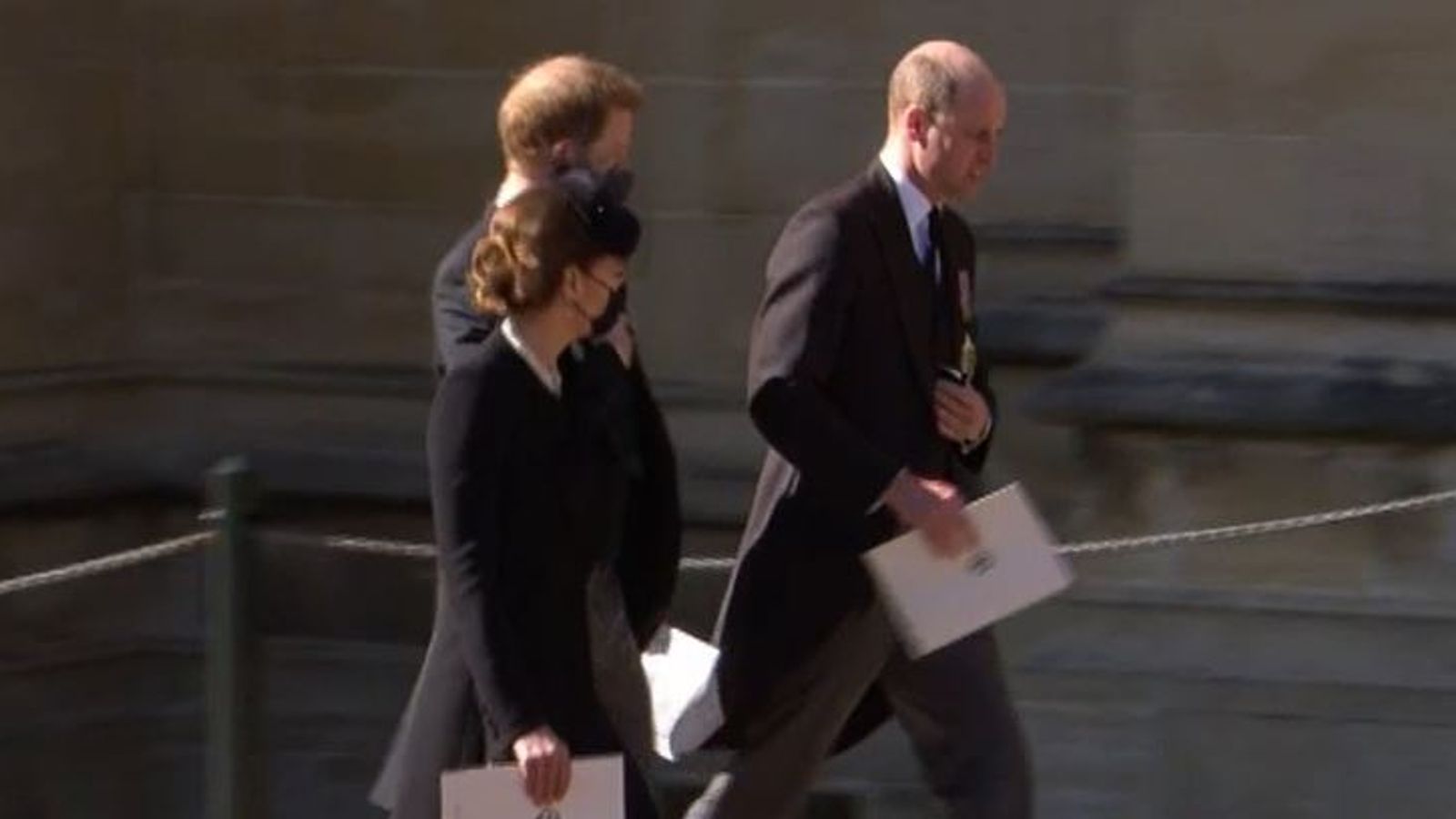 Prince Harry was seen talking with his brother William as he left St George’s Chapel following the Duke of Edinburgh’s funeral.

The pair were seen leaving the service at Windsor Castle together along with the Duchess of Cambridge.

There has been limited contact between the brothers since Harry and his wife Meghan filmed a tell-all interview with Oprah Winfrey last month.

Harry had referenced reports that his relationship with his brother was strained, saying “the relationship is space at the moment” and that “time heals all things, hopefully”.

In 2019, when asked about an alleged rift with William, Harry said he loved his brother dearly but they were “on different paths” and have “good days” and “bad days”.

Image: Members of the Royal Family as the national anthem plays at the Duke of Edinburgh’s funeral

At their grandfather’s funeral, the brothers were sat opposite each other, with William in a COVID bubble with his wife Kate and Harry sat alone.

The Duchess of Sussex, who is pregnant with the couple’s second child, did not fly over from the US with Harry on the medical advice of her doctor.

Prince Harry has since been self-isolating at Frogmore Cottage after arriving back in the UK.

The funeral is the first time the Duke of Sussex has been seen publicly with the Royal Family following the bombshell interview with Oprah Winfrey.

Image: The brothers had walked in a procession within the grounds of Windsor Castle, either side of their cousin Peter Phillips

The interview saw Harry and Meghan accuse an unnamed member of the family of making racist remarks about their son Archie before he was born, and accuse the institution of failing to support the duchess.

Days later, Prince William defended the Royal Family, saying they were “very much not a racist family”.

Before the funeral service, the brothers had walked in a procession within the grounds of Windsor Castle, either side of their cousin Peter Phillips.

Prince Philip’s coffin carried on to church steps Image: The Queen was sitting alone at the front of the quire

Later, Harry was sat 10 seats away from his grandmother, the Queen, who was sitting alone at the front of the quire, closest to the altar.

Dressed in a face mask and in sombre black, the monarch’s arrival at the ceremony was the first time she had been officially seen in public since the Duke of Edinburgh died eight days ago.

The congregation at Philip’s funeral was limited to just 30 people due to COVID-19 restrictions.

A small group of Philip’s close family and friends attended the televised funeral service, which began with a national minute’s silence at 3pm.