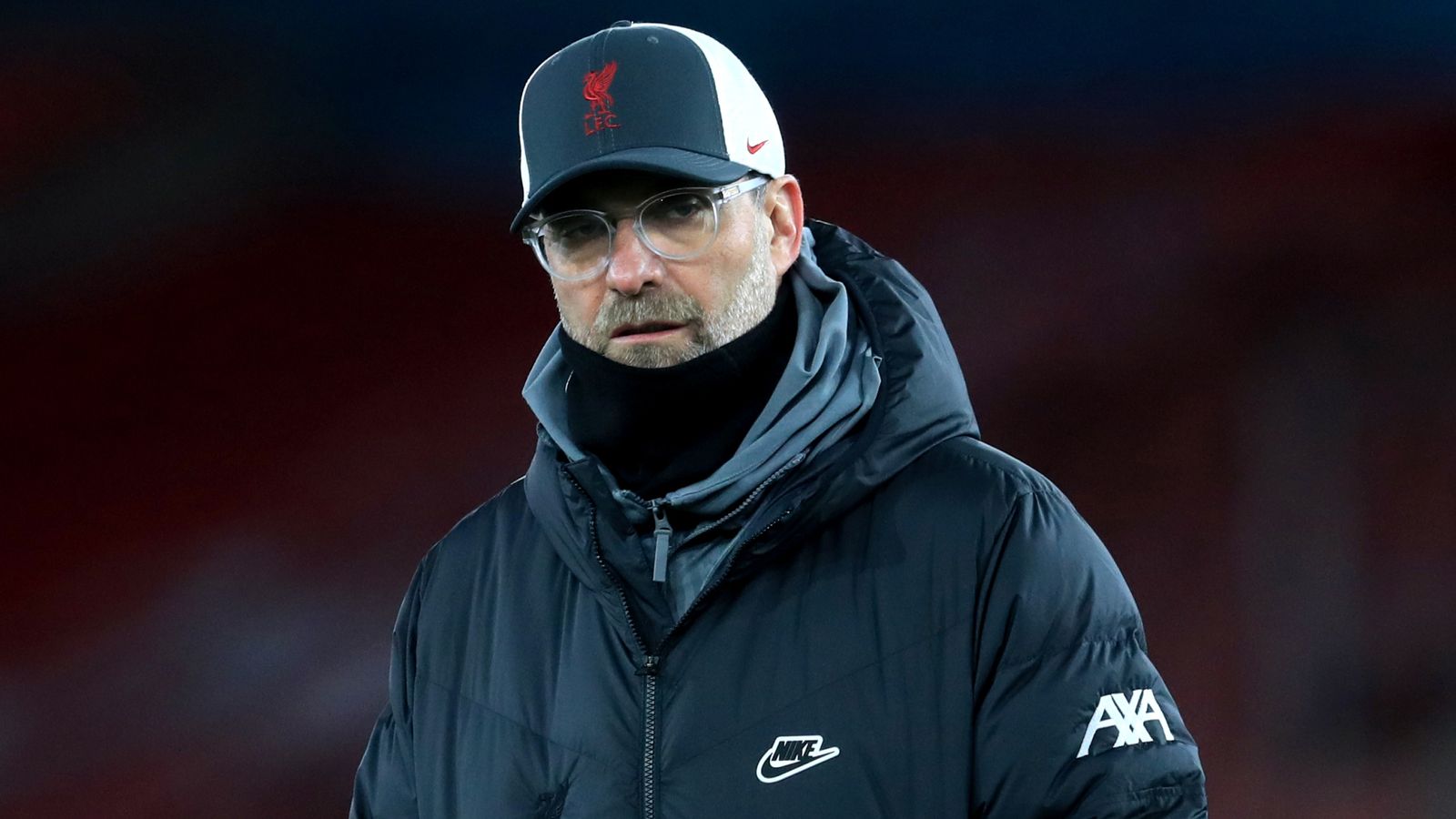 Liverpool manager Jurgen Klopp has said he did not find out about the European Super League until its announcement – and stood by previous comments in opposition to the idea.

Speaking on Monday Night Football on Sky Sports, Klopp was asked about comments in 2019 in which he said he hoped such a competition would “never happen”.

He said his opinion “didn’t change”.

“People are not happy, I can understand that – but I cannot say much more about it,” he said ahead of Liverpool’s Premier League match against Leeds tonight.

“We were not involved in the process, not the players, not me, we didn’t know about it. That’s the case or the fact, the facts are out there. We will have to wait to see how it develops.”

Klopp said he had “no issues” with the existing Champions League competition, which he won with Liverpool two seasons ago, and “liked the competitive factor of football”.

He added: “I like the fact West Ham might be in the Champions League next year. I don’t want them to, because I want us to be, but I like that they have the chance to be.”

With Liverpool fans putting up anti-Super League banners outside Anfield, Klopp also called on the club to remain united during the uncertain times.

“The most important part of football are the supporters and the team and we have to make sure that really nothing gets in-between that.”

He continued: “I heard we put banners down at Anfield and stuff like this.

“There are things we have to sort obviously, but nothing to do with the football or relationship between the supporters and the team, that is really important, because in tough times you have to show that you stick together.”

After the game, which ended 1-1 thanks to a late Leeds equaliser, Liverpool’s James Milner made his displeasure with the proposal clear.

The Englishman reiterated his manager’s comments about the squad having been left in the dark over the plans, and told Sky Sports: “I don’t like it and I hope it doesn’t happen.”

Klopp and Milner were speaking less than 24 hours after Liverpool joined 11 other “founder clubs” in announcing their intension to form the new league, to widespread condemnation from across the game and beyond.

“In the last 24 hours Sky Sports has passionately articulated the views of football fans on the importance of preserving and sustaining the whole football pyramid,” it said.

“We are completely focussed on supporting our long term football partners in the UK and in Europe, already providing fans with the best live action from the best football competitions in the world, and we have not been involved in any discussions with the proposed breakaway European Super League.”

UEFA boss: ‘They think football is a party for rich people’

The president of UEFA said plans for the breakaway tournament are a “spit in the face of all football lovers”.

Aleksandr Ceferin said players at the 12 clubs setting up their own midweek league, including English football’s so-called “Big Six” – Arsenal, Chelsea, Liverpool, Man City, Man Utd and Tottenham – will be banned from international competitions, such as the World Cup and European Championships.

The other ‘founding clubs’ who have signed up are Italy’s AC Milan, Inter Milan and Juventus, and Atletico Madrid, Barcelona and Real Madrid of Spain, with three more anticipated to join ahead of the inaugural season.

Ceferin said: “UEFA and the footballing world stand united against the disgraceful self-serving proposal we have seen in the last 24 hours from a select few clubs in Europe that are fuelled purely by greed.

“The players who will play in the teams that might be playing in the closed league will be banned from playing the World Cup, and so they will not be able to represent the national teams at any matches.

“In my opinion, this idea is a spit in the face of all football lovers, and our society as well. So we will not allow them to take it away from us.”

At a bar in Washington DC, Sky News found little support for the move among the international fans the new league would seek to cater for. Michael Lipps took a moment away from the Liverpool game to voice his opposition.

“I don’t think it’s good for the game. The whole structure of soccer is giving everyone a chance, especially in England, to make sure to do a lot better job of distributing the money across the teams and the different tiers,” he said.

Briton Michael White said: “I think it’s pretty disgusting acually. I think that it’ll cause the end of a lot of fans watching the English Premier League.

Chelsea, Manchester City and Real Madrid have been warned they face expulsion from next week’s Champions League semi-finals because of their involvement.

It is understood the Premier League has called its other 14 clubs to an emergency shareholders’ meeting on Tuesday morning, to which Arsenal, Chelsea, Liverpool, Manchester City, Manchester United and Tottenham have not been invited.

It will be a chance for the clubs to consider what happens next.

Culture Secretary Oliver Dowden told parliament that the Premier League and the Football Association were “considering a wide range of sanctions”.

He said the government was ready to do “whatever it takes” to prevent the clubs from breaking away if the actions of the football authorities prove insufficient.

The government has brought forward its fan-led review of football governance as a result of the Super League announcement. It will be headed by former sports minister Tracey Crouch.

Potholes: UK’s roads like ‘the surface of the moon’, after record rise in breakdowns, RAC says

Do you know these dogs? Police try to reunite dozens of pooches with their owners after raid