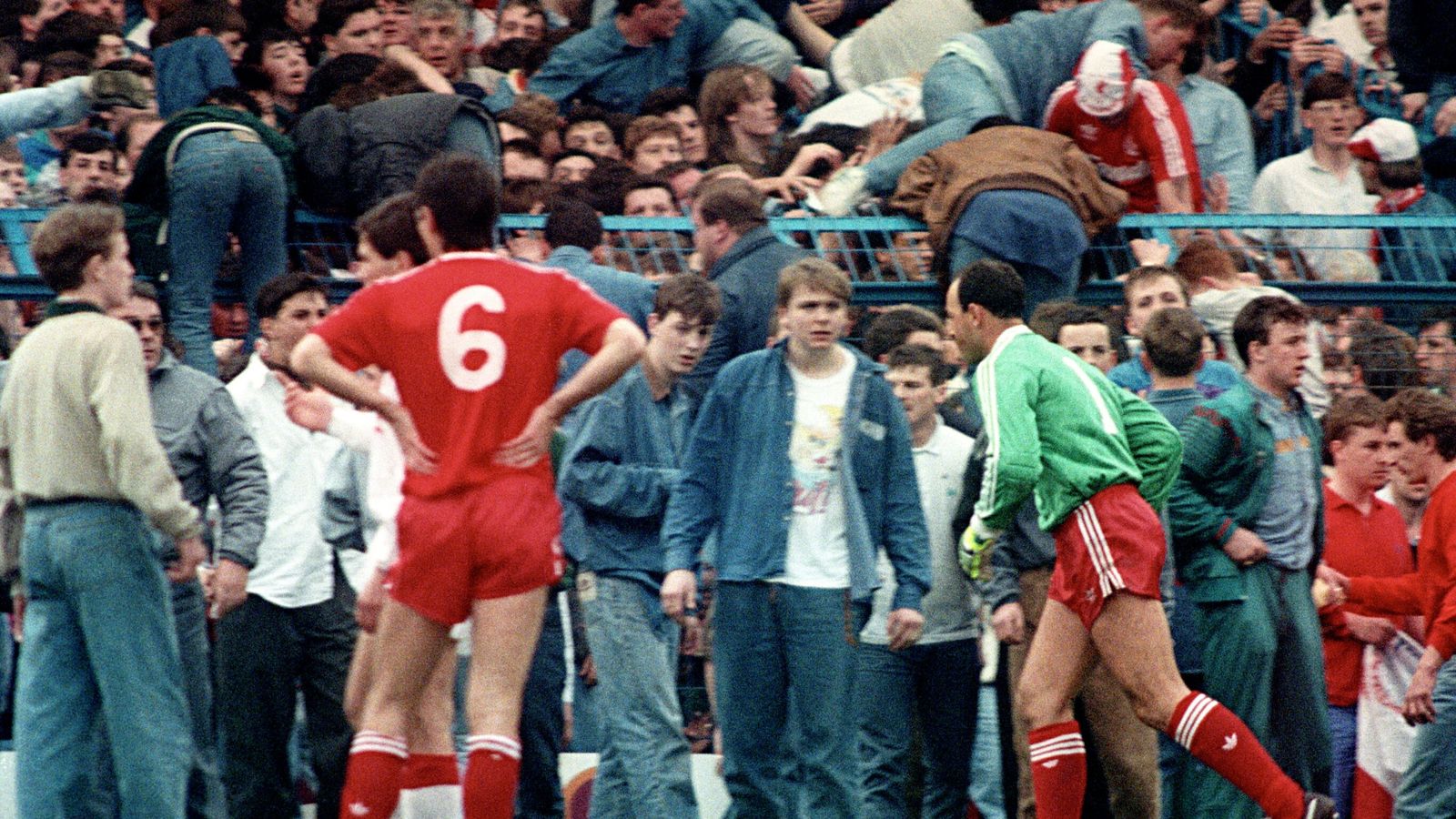 Three men have gone on trial accused of deliberately altering police statements after the Hillsborough disaster to “mask the failings” of South Yorkshire Police.

A total of 96 Liverpool fans died as a result of the crush at Hillsborough stadium in Sheffield on 15 April 1989 as their club played an FA Cup semi-final against Nottingham Forest.

Former police officers Donald Denton, 83, and Alan Foster, 74, along with former police solicitor Peter Metcalf, 71, are accused of perverting the course of justice in the aftermath of the tragedy.

After the jury was sworn in at the Lowry Theatre in Salford, which is operating as a Nightingale court (a temporary location to help with coronavirus restrictions), prosecutor Sarah Whitehouse QC opened the case.

Image: A fan wears a shirt in memory of the victims of the Hillsborough disaster

“You may be saying – as doubtless others are – what else can be said about Hillsborough?

“Haven’t we had countless trials and enquiries and inquests? It is true that we have… but this trial is the first and only time a jury of 12 people will consider the evidence that you are about to hear in a criminal trial.”

Image: Fans create a mural before kick-off on the eve of the 30th anniversary of the Hillsborough tragedy in 2019

Ms Whitehouse said the three defendants had tried to “minimise the blame” for South Yorkshire Police – the statements were used at the various inquiries that followed the worst sporting disaster in UK history.

She said: “They did this by altering accounts given by police officers who were present on the day.

“Peter Metcalf was a solicitor and he advised on what alterations should be made to accounts made by South Yorkshire Police on the day.”

Denton and Foster, senior officers with the South Yorkshire Police, saw to it the advice given by Metcalfe was followed and the accounts were amended, she said, adding: “They were the main points of contact with Mr Metcalf and acted to carry out Mr Metcalf’s instructions.”

She went on to say a number of accounts were altered by them, or at their direction.

“The effect of the alterations was to mask the failings on the part of South Yorkshire Police in their planning and execution of the policing of the football match.”

Judge Mr William Davis reminded the jury even though he was sitting on the stage of a theatre the venue is operating just like a crown court and they should judge the case entirely on the evidence they hear in the coming weeks.

Metcalf, Denton and Foster all deny the charges and the trial is expected to last up to 16 weeks.

COVID-19: Britons who test positive for coronavirus could be sent antiviral tablets to take at home