Surrey: The mystery of the late-night lumberjack chain-sawing down trees under the cover of darkness ‘for no reason’ 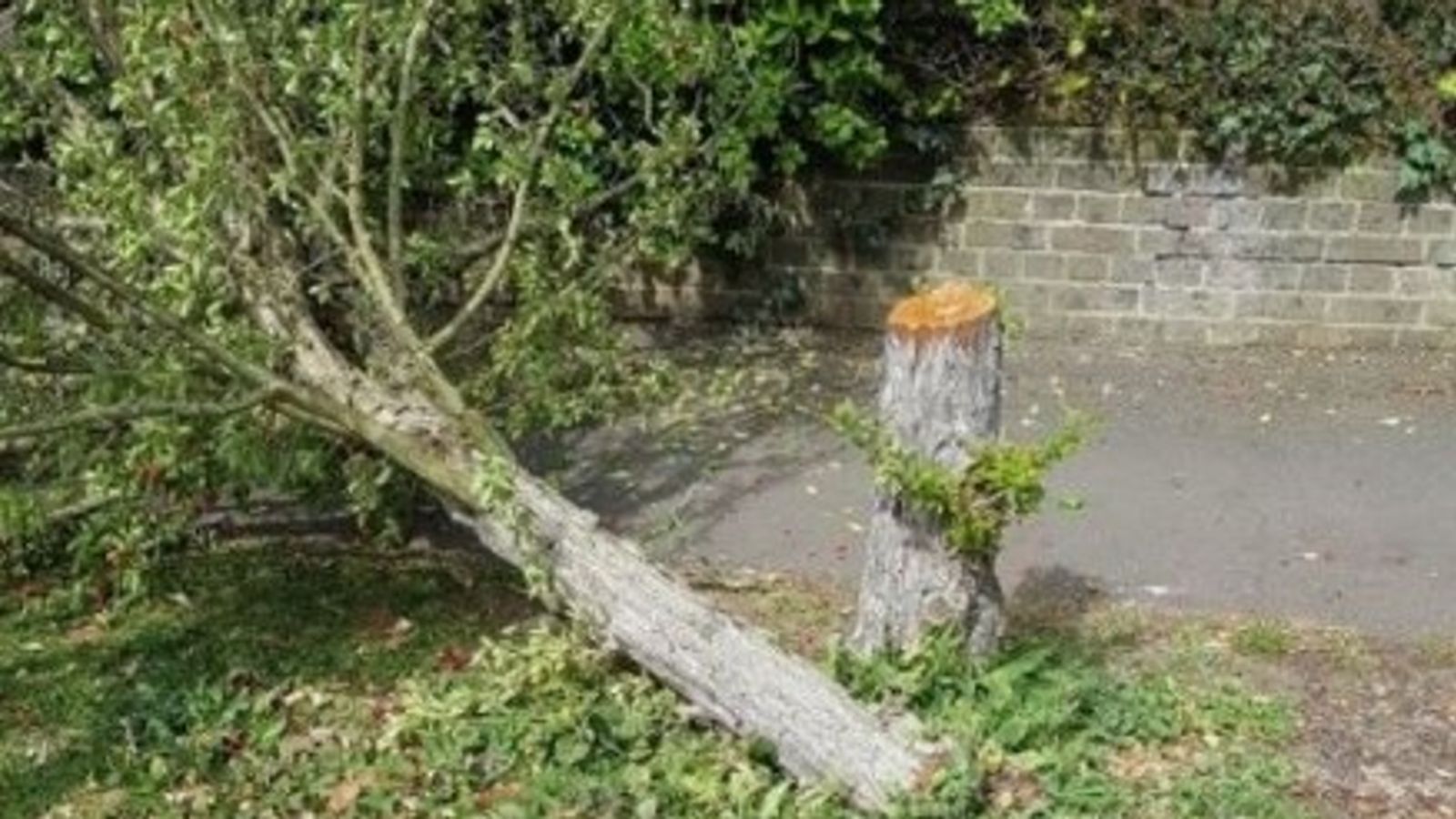 A mystery tree-feller is chain-sawing down trees under the cover of darkness.

No one has any idea why, but more than 50 trees have been hacked down and simply left strewn on the ground in various locations around the small Surrey town of Weybridge in the borough of Elmbridge.

Residents have formed a Facebook action group called Elmbridge Tree Patrol to try and stop the audacious lumberjack, they accuse of “mindless vandalism”.

But, despite late-night patrols, the trawling of hours of CCTV footage, appeals for doorbell cam videos, and even the use of number plate recognition technology, police are no nearer to identifying the perpetrator or perpetrators.

The feller has even cut down memorial trees, leaving families devastated.

Resident Tony Callaghan told Sky News: “It just seems to be nothing more than spiteful. There does not seem to be any other reason for it.”

He said the chain-sawing had been going on for at least a month and around 50 trees had been destroyed.

Image: At least 50 have been destroyed. Pic: @riverdiarist/Tony Callaghan

“It is such a terrible thing and nobody knows why it is happening – but the biggest conjecture has been around how they are doing it.”

He said a number of conspiracy theories had been developed about the kind of chainsaw being used.

“Some say it must be a battery saw because petrol ones make so much noise,” he said. “Other people say they have seen a red car nearby, others say they are maybe using a moped to get away.

“One of the recent trees had a bouquet placed on it and was a memorial to someone’s mother – it’s really sad.”

He said the first trees to be targeted were ones lining the River Thames between Weybridge and Walton-on-Thames, as well as into the neighbouring town of Cobham.

There was then a short period where the feller appeared to have stopped, but last weekend another eight were chopped down.

“These were really nice cherry trees, just about to blossom,” Mr Callaghan added.

He added: “Not only are these trees a haven for wildlife but they bring much pleasure to our community.

“I am speaking to local councillors who are increasingly concerned at this issue and we review every bit of evidence we can to try and identify who is doing this.

“We continue with our patrols into the night, whilst also responding to emergencies.”

Many residents have come forward and offered to mount night-time patrols in support, but police are advising against it, largely because the person is carrying a chainsaw.

But an Elmbridge police spokeswoman said officers do need public help in other ways.

“Whoever is doing this is all over the place – and it is really sporadic, so we do need the public’s help,” she said.

Police have already made many enquiries following lots of calls from the public but are now also asking for any digital evidence of the suspect to be shared with them.

Inside the Facebook group of local sleuths on a mission to catch ‘Jack the Chipper’
By Sanya Burgess, forensic unit

The residents of the “Beverly Hills of Britain” (also known as Elmbridge, Surrey), are furious.

They’ve mapped the crime scenes, organised night-time patrols and tried to track down CCTV footage in their bid to catch the phantom tree chopper of Surrey.

One of the 1,200 members in the page suggest the tree-chopper should fork out to replace the trees, adding: “The culprit might like living in an area void of any natural beauty, but we are proud of our surroundings (as they were).”

The locals have banded together, sharing snippets and clues about the figure they have nicknamed “Jack the Chipper”.

Could the grumpy late night cyclist with the big bag be the perp? Or a person with a vendetta against trees running along the local tow-path? Or just someone looking for attention in the press?

The most popular theory among the community sleuths is a man who drives a small red car and may be using a battery-powered saw.

Multiple posters believe he is an amateur when it comes to chopping trees, saying the rough finish on the stump gives that away.

One local, Joel Andrews, told Sky News people were sharing so much information into the group it became confusing, so he plotted the chopped down trees on to this map.

Image: The locations of the felled trees has been mapped by local resident Joel Andrews

The map shows trees have been felled from Weybridge to Walton-on-Thames, with many along the River Thames tow path.

Mr Andrews said: “It’s great that the community are banding together on this problem. I know some of the felled trees were ‘memorial trees’ that some people had a special memory associated with.

“Most people are just frustrated and angry that a person/s is showing such a blatant disregard for our public spaces.”

Weybridge residents are particularly concerned about a group of trees opposite Desborough island on the Weybridge side.

While the group mourn the loss of the trees, several in the group have shared their delight in seeing the community coming together to try to solve this mystery.

Fundraising efforts have begun on GoFundMe, plans to plant new trees are under way and a sense of local spirit has sprouted.