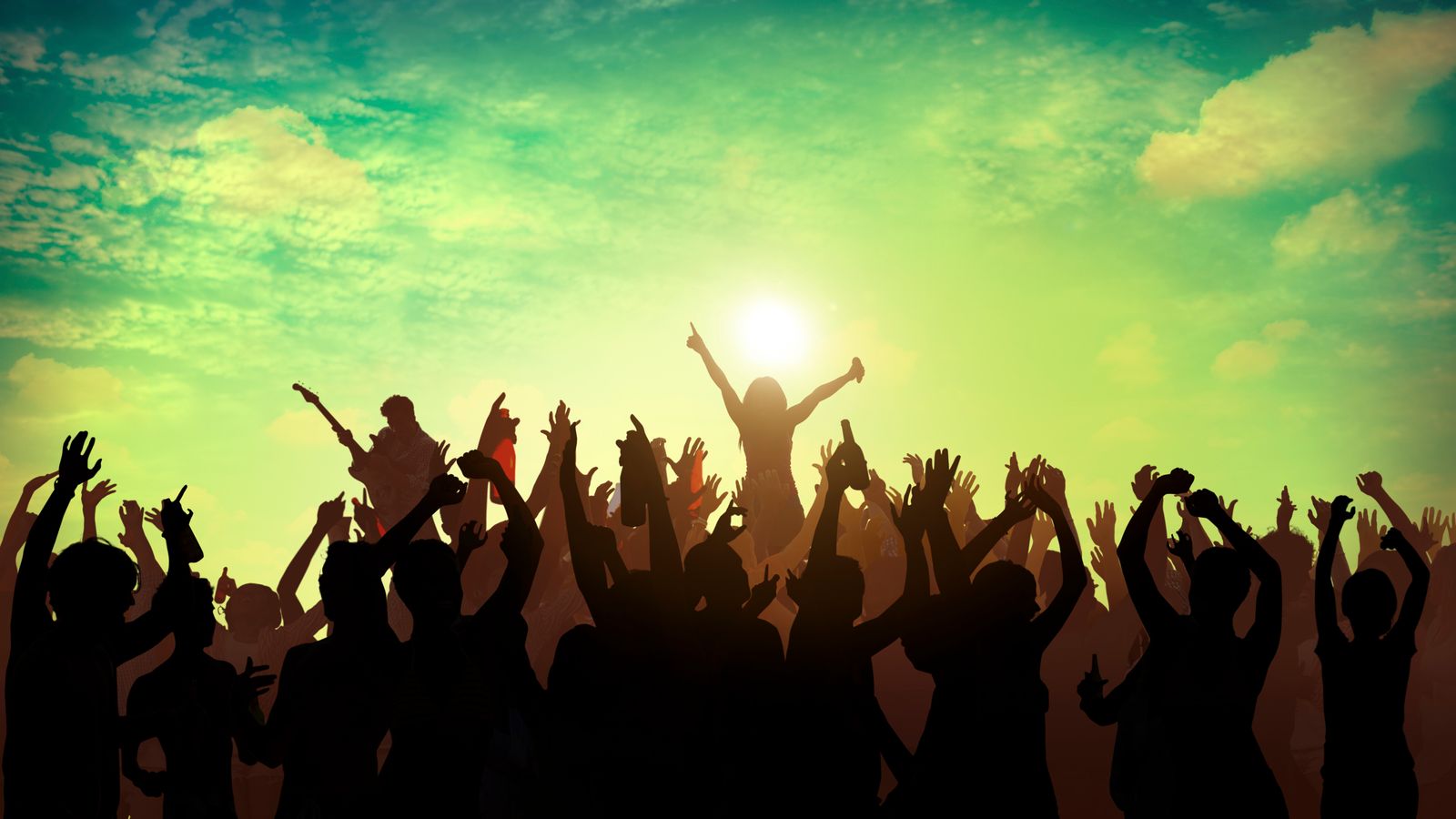 When Boris Johnson first announced his roadmap for lifting the UK out of lockdown restrictions back in February, it seemed like normality was finally on the horizon – and for music fans, that meant a return to live gigs.

With a date of 21 June set to remove all limits on social contact, there was optimism that although Glastonbury, the big one, had already been called off, the majority of summer festivals would still go ahead.

Reading and Leeds organisers were quick to announce the festivals would take place as usual in August, while Isle Of Wight bosses confirmed the event would go ahead, but pushed back from June to September.

Image: The Isle Of Wight Festival has been moved from June to September for 2021

With the COVID-19 pandemic wiping events out in 2020 it has been almost a two-year break since the last festival season, and operators are seeing strong demand for tickets.

However, industry experts have long been warning that without more certainty from the government, and with no coronavirus insurance in existence to protect mass events should restrictions change, keeping events on could be a risky move as the costs and logistics involved are usually too great to leave decision-making until later in the year.

England is currently in stage two of the prime minister’s lockdown lifting plan, with stage three, due to start on 17 May, looking likely to go ahead as proposed. The route out of lockdown is dependent on coronavirus cases, deaths and hospital admissions remaining low, but at the moment there is nothing to suggest the 21 June target will not be met.

And yet, earlier this week, Boomtown Festival, which sold out its 66,000 tickets in February, was cancelled. Why? The lack of a government-backed insurance scheme, organisers said. Deer Shed made a similar announcement the following day.

Insurance is the big issue. So what does this mean for the rest of the summer festivals?

Paul Reed, chief executive of the Association of Independent Festivals, which represents more than 75 UK festivals, says the cancellation of Boomtown is “devastating but not surprising”. In a statement sent to Sky News, he warned there would be more to come.

“AIF has been warning and providing evidence to the government for over six months on the urgent need for intervention on insurance,” he said. “It is an enormous risk for any independent festival to commit to upfront, non-refundable costs and very difficult to plan with confidence in the absence of insurance. The average cost of staging an independent festival is over £6 million.

“A recent AIF member survey revealed that 92.5% of respondents do not plan on staging their events without some form of government-backed insurance or indemnity scheme, with the measure being described as vital not optional. Considering the lengthy planning cycle of festivals, it is difficult to think anything other than we are being timed out for the summer.”

Image: Boomtown sold out back in February, but organisers have now called it off

What did Boomtown organisers say?

The festival was due to take place on the Matterley Estate near Winchester in August, but organisers said as they cancelled the event that they did not have enough confidence it could safely go ahead. Tickets will be valid for next year, with refunds being given to those who want them.

In a statement, Boomtown said: “After almost half a year of collective campaigning to the government, sadly COVID-specific cancellation insurance for events still does not exist at this point in time.

“This means anyone putting on an event this year will be doing so without the safety net of insurance to cover them should COVID prevent them from going ahead in any capacity. For an independent event as large and complex as Boomtown, this is a huge gamble of up to an eight figure sum and the financial risk is simply too high.”

North Yorkshire festival Deer Shed also cited the lack of insurance, saying that as a family owned and run event, the risks of going ahead without it would leave organisers “financially exposed well beyond our comfort zone”.

Despite postponing the main festivals, organisers did announce a smaller event, Base Camp Plus, for the weekend of 30 July, with further details to be revealed soon. Tickets for Deer Shed can be refunded or rolled over to 2022, they said.

Image: Glastonbury organiser Emily Eavis announced this year’s festival was off even before the lockdown roadmap was released. Pic: AP

Which festivals are currently going ahead – and which are cancelled?

Rock festival Download, in northwest Leicestershire, and Hyde Park’s British Summer Time in London are two that have been called off, alongside Glastonbury and Boomtown.

Reading and Leeds and Isle of Wight are two major events still set to go ahead, along with Latitude, Wireless, Camp Bestival, Kendall Calling, Slam Dunk, TRNSMT and Parklife, while The Great Escape has gone virtual. You can read more about festivals and live music still planned here.

In mainland Europe, a number of governments, including in Germany, Austria and the Netherlands, have said they will underwrite insurance schemes to provide events firms and insurance companies with confidence to push forward with plans.

Industry experts in the UK are questioning why the same cannot happen here.

“Governments across the rest of Europe have already acted to support festivals, sharing the risk with organisers so that they may reopen safely,” the AIF has said.

“If this government doesn’t intervene in some way on insurance and back its own roadmap, I’m afraid that, despite the rhetoric, it won’t be a great British summer for events – it will be an extremely selective one despite the clear demand and huge amount of customer confidence that the roadmap has injected.”

Image: Liam Gallagher is one of the stars booked for Reading and Leeds 2021. Pic: CTK via AP

Following the Boomtown announcement, the chair and deputy chair of the Covid Recovery Group, Mark Harper and Steve Baker, shared details of a letter to Boris Johnson signed by 42 Conservative MPs, calling on the prime minister to save summer festivals and live events.

They are asking the government to back a £250 million insurance scheme for event organisers to “ensure that live music festivals can proceed with their plans to go ahead after 21 June”.

They say this plan is different to previous support schemes and furlough as the live events industry “does not require another lump sum” from government, but instead needs “insurance against the political risk, however minimal, that the government will impose restrictions on the industry and its customers” after this date.

Without this, most festivals and live events will be cancelled, they say, with “countless” job losses and business closures.

“This scheme would save £1.1 billion of costs to the industry, would give confidence to organisers so that they can prepare for their festivals to go ahead, would turbocharge Britain’s economic recovery and would bring hope to millions of festival-goers and young people – who have borne the brunt of lockdown – that life this summer will be a normal one.”

Image: Blossoms are due to headline a pilot test gig in Liverpool. Pic: Ewan Ogden

Earlier in April, a compensation scheme set up by the government was announced to support large-scale pilot events set up to test the safety of mass gatherings, with up to £300,000 to be made available to organisers should an event have to be cancelled.

Pilots scheduled to take place include a gig at Liverpool’s Sefton Park, featuring Blossoms, The Lathums and Zuzu, on 2 May. The city’s Circus Nightclub will also host an event for 3,000 people, and the FA Cup final at Wembley also forms part of the test.

The Brit Awards on 11 May is the latest event to be announced as part of the scheme, allowing for 4,000 guests. Audience members will not be socially distanced or required to wear face coverings, but will be required to follow existing guidance when travelling to the venue and adhere to rules set out by event organisers.

But this scheme is limited to the events research programme only, with a government spokeswoman saying: “It is right to provide assurance to the organisers, given the risk they are taking in helping research to inform the reopening of the economy.

“We are aware of the wider concerns about securing indemnity for live events and are exploring what further support we may provide.”

Digital, culture, media and sport (DCMS) committee chairman Julian Knight described the announcement of the compensation scheme as a “clear admission that there is severe market failure” in events insurance.

Image: Mabel pictured at the Brit Awards – set to be a pilot event this year – performing on stage in 2020. Pic: AP

What does the government say?

Almost £2 billion has gone into supporting the arts and culture sectors through the pandemic, with the £1.57 billion Culture Recovery Fund announced in the summer of 2020, extended by £300 million in this year’s budget.

More than £34 million of this has gone to festivals, including Boomtown, Glastonbury and Deer Shed, a government spokesperson said in a statement sent to Sky News.

“We are aware of the wider concerns about securing indemnity for live events and are exploring what further support we may provide,” the spokesperson added. “Last week, we announced a new event through our Events Research Programme. This event will test how we can reopen festivals, with an outdoor music event at Sefton Park in Liverpool on 2 May.

“Our roadmap provides a clear plan for reopening all sectors in a phased, safe way and we are supporting businesses and organisations to prepare for this.”

Image: Taylor Swift had been due to headline Glastonbury in 2020, before it was called off. Pic: AP

So what happens next?

It is not just the AIF that is worried about the future of this year’s festivals. Greg Parmley, chief executive of LIVE – a federation of 13 live music industry associations representing 3,150 businesses, more than 4,000 artists and 2,000 backstage workers – says there needs to be a contingency plan in place.

Without it, “the risk of undertaking activity this summer will simply be too great for the majority of events”.

He continued: “We are already seeing an increasing rate of cancellations, including Glastonbury and now Boomtown, and that will become a flood in the coming weeks if a solution isn’t found.

“The live music industry thinks that using unspent Culture Recovery Money to create a contingency pot to provide some form of protection for events is the best way to get money through the entire live music ecosystem – from artists and venues to technical staff and freelance crew – by enabling people to get back to work.

“The prime minister has said he wants this to be a great British summer. So do we. But that won’t happen if our world-leading live music events disappear for the second year in a row.”

UK Music chief executive Jamie Njoku-Goodwin said: “The financial risks involved in planning a major event without proper insurance is too great for the vast majority of organisers to bear. The consequences are already playing out.

“Despite the huge success of the vaccine rollout, and the optimism from ministers about a ‘great British summer’, we’ve already seen major festivals that should have taken place this summer cancel.

“Without viable insurance options, I fear we will see a wave of cancellations of festivals in the coming weeks.”