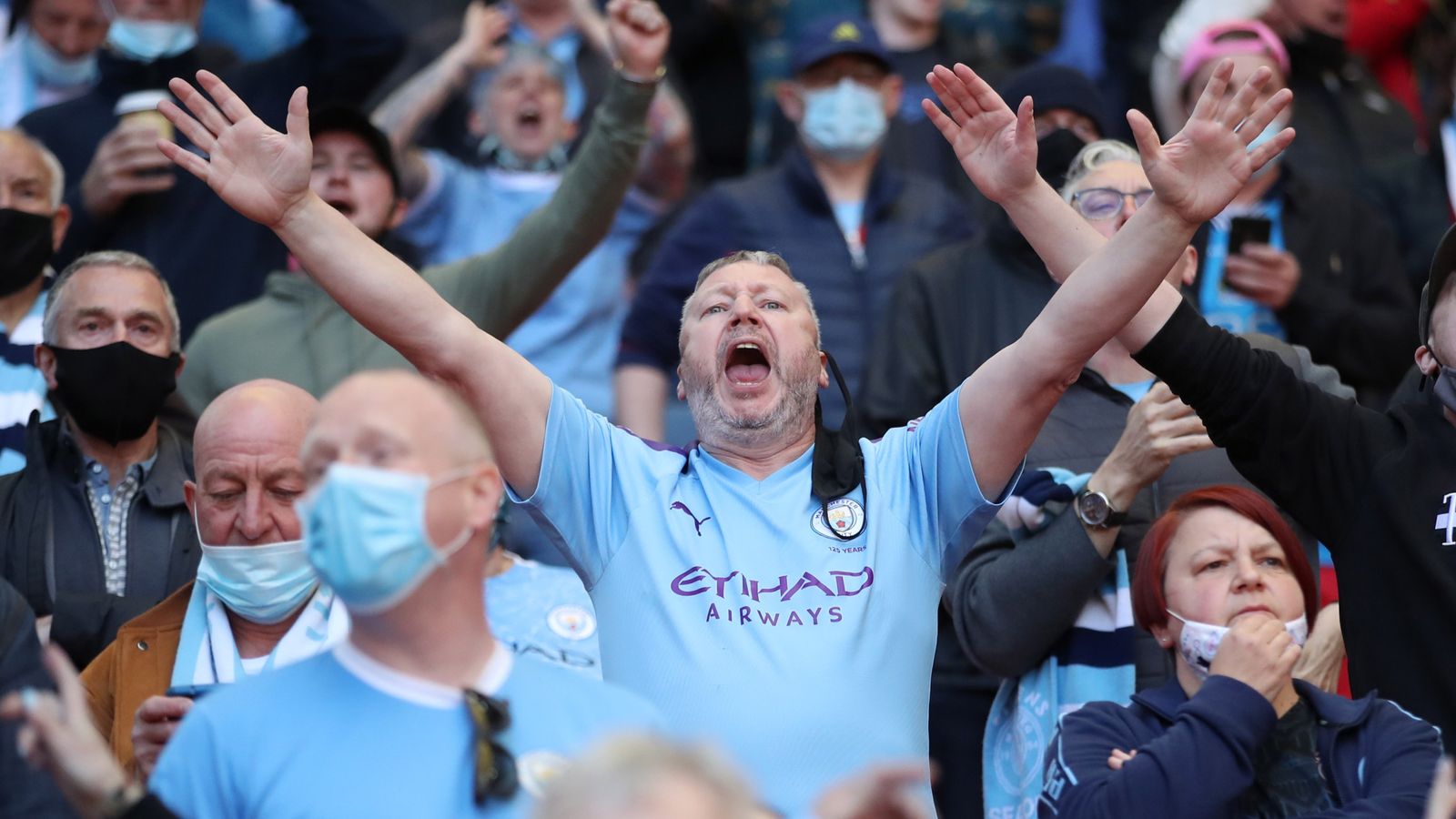 Manchester City have won the League Cup final at Wembley in front of the UK’s biggest football crowd since before the pandemic.

Each club had 2,000 fans in the stands, while a further 4,000 tickets were given to NHS staff and local residents.

Image: Aymeric Laporte after scoring for Manchester City Image: A fan showing he is eligible to go in

Everyone had to present a negative COVID-19 test result before being allowed in, while City fans had to travel down to London in official club transport.

Last weekend’s FA Cup semi-final between Leicester and Southampton was played before a crowd of 4,000 spectators.

If Sunday’s event is deemed to have passed off successfully, there will be 21,000 fans at next month’s FA Cup final between Chelsea and Leicester.

Image: A banner directed at the collapsed European Super League Image: Everyone in the stadium had to present a negative COVID-19 test result

On the pitch, it was the 82nd minute before there was a goal, Aymeric Laporte heading in a Kevin de Bruyne free kick for Manchester City.

Laporte told Sky Sports: “We are so happy to win this title again. We lost in the FA Cup, so it is something good for us to get confidence and to keep going like we have done in the last few months.”

Spurs might argue he was fortunate to still be on the pitch after fouling their forward Lucas Moura twice in the latter stages of the first half, being booked only for the second one.

Image: The City players with the cup

But Gary Neville, commentating on the match for Sky Sports, said City were “so dominant”, adding: “The passing and domination was a lesson for Ryan Mason (Tottenham’s interim head coach). They created so many touches.”

Spurs forward Son Heung-min was in tears at the final whistle – several City players, including Phil Foden and John Stones, going to console him.

City have claimed the League Cup for the fourth consecutive year. It was a record-equalling eighth triumph for them, and their sixth in the past eight seasons.

It is the first of three possible trophies for Pep Guardiola’s team this season. They are almost certain to win the Premier League, and play Paris Saint Germain in the first leg of a Champions League semi-final on Wednesday.