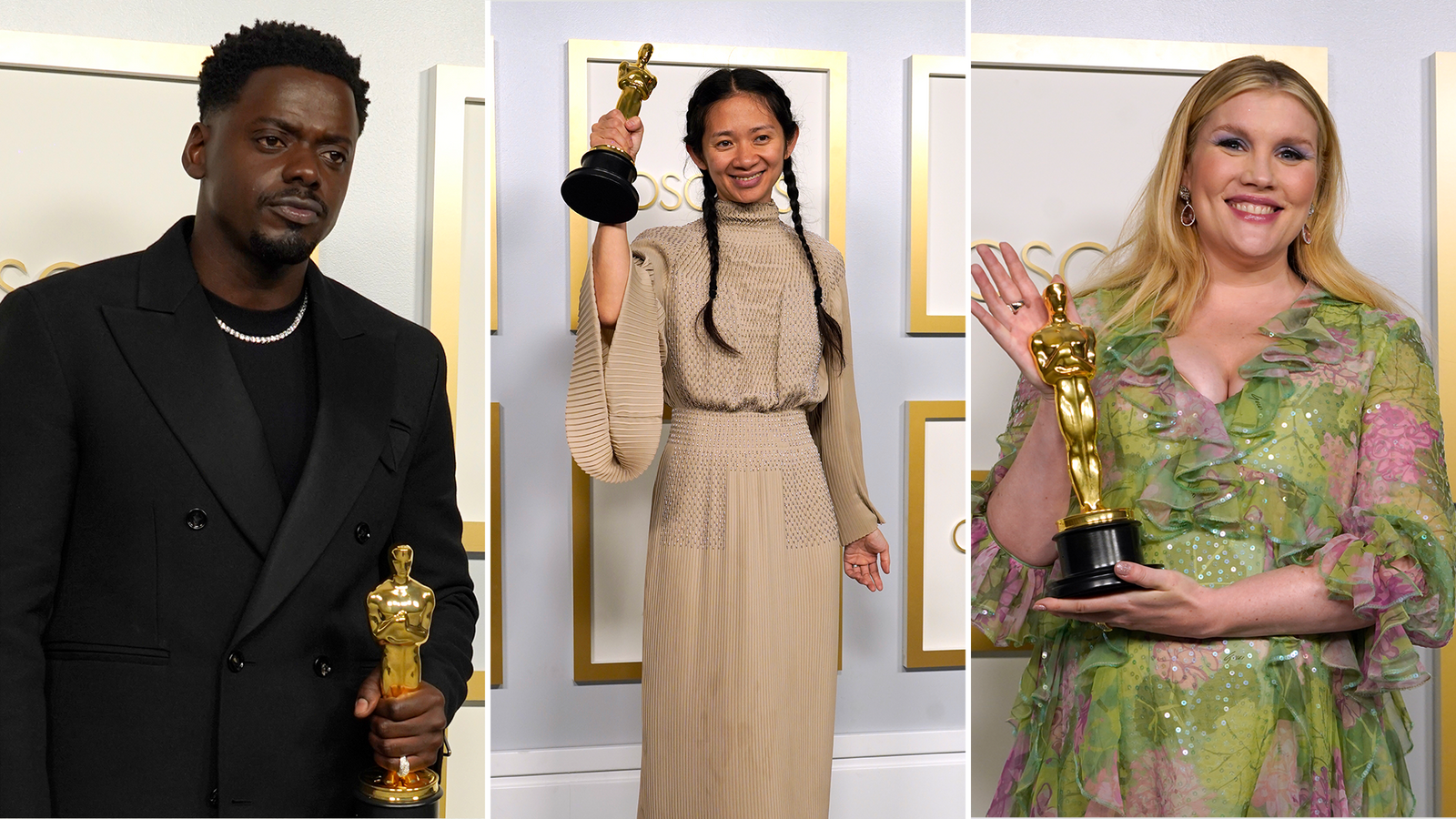 Nomadland has swept the Oscars with wins for its director Chloe Zhao and its lead Frances McDormand as well as best film – with British stars Daniel Kaluuya and Emerald Fennell also among the winners.

Zhao, who was born in China, is the first woman from an ethnically diverse background to win the Academy Award for directing, and the second woman in history, after Kathryn Bigelow’s triumph 11 years ago for The Hurt Locker.

The full list of winners from the 93rd Academy Awards

Accepting her statuette for her directing, Zhao told the audience at Los Angeles’ Union Station: “I have always found goodness in the people I met, everywhere I went in the world.

Nomadland continued its dominant run, with Frances McDormand picking up the award for best actress, who told the crowd the night needed a karaoke bar.

Sir Anthony Hopkins, who was absent from the ceremony, won the award for best actor for his performance in The Father, with the film also winning best adapted screenplay.

Sir Anthony’s win came as somewhat of a shock, with Chadwick Boseman widely tipped to win posthumously for his role in Ma Rainey’s Black Bottom – one of his final films before his death.

Elsewhere, Daniel Kaluuya was named best supporting actor for his role as Black Panther leader Fred Hampton in Judas And The Black Messiah, while Emerald Fennell walked off with best original screenplay for her debut movie and Sky Original, Promising Young Woman.

Taking to the stage, Kaluuya, who is the first black British winner of the supporting actor award, said he admired Fred Hampton, who was shot and killed by police in Chicago in 1969, adding: “When they played divide and conquer, we say unite and ascend.

“There’s so much work to do guys and that’s on everyone in this room.

“This ain’t no single man job. We’ve got work to do.

“I’m going to get back to work Tuesday morning, because tonight I’m going out.”

Best supporting actress went to 73-year-old Youn Yuh-jung, who played Soon-ja in Minari – a film about a Korean family trying to make it as farmers in 1980s America.

She paid tribute to the other women in her category, declaring she “doesn’t believe in competition” and questioned how she won over fellow nominee Glenn Close.

Close, who has been nominated for eight Oscars in her career but has never won, did give the 170-strong crowd a lighter moment though, as she twerked to the track Da Butt during a segment hosted by musical guest Questlove.

Prizes this year were mainly dished out from Los Angeles’ Union Station rather than its normal home of the Dolby Theatre.

Producers had given much hype to the show, with them saying they wanted it to resemble a film amid slumps in award ceremony audiences across the US.

Those who were unable to travel to LA due to COVID restrictions were able to attend at one of the international hubs, which included the BFI on London’s Southbank.

Guests were not required to wear face coverings while on camera at the ceremony, but were asked to use them when they weren’t on screen.

Unusually, most of the films nominated have not had cinema releases and have instead been placed onto streaming services such as Sky, Netflix and Amazon, in what has been a bumpy year for the film industry.

Oscars 2021: The full list of winners and nominees from this year’s Academy Awards