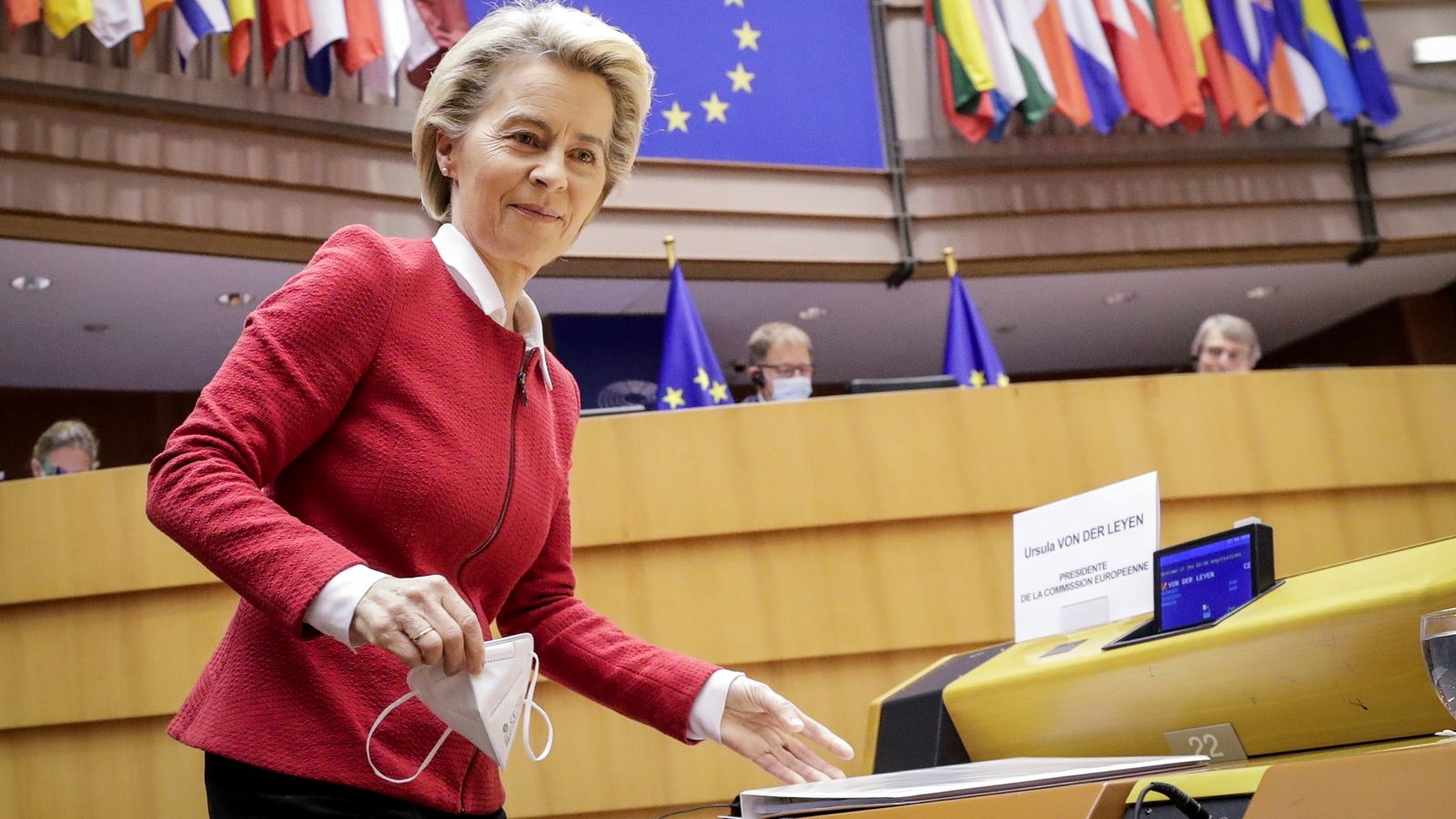 The European Union “will not hesitate” to take action against the UK under the terms of the post-Brexit trade deal, the bloc’s top official has warned.

European Commission President Ursula von der Leyen spoke of the “real teeth” in the EU-UK agreement – struck with Prime Minister Boris Johnson on Christmas Eve – as she addressed the European Parliament ahead of its final debate on the deal.

MEPs on Tuesday night voted on whether to approve the EU-UK post-Brexit trade deal, with a result to be announced on Wednesday morning.

Image: Michel Barnier described the UK’s exit from the EU as ‘a failure’

The deal has provisionally been in force since the end of the transition period on 1 January, but – without yet having received an approving vote by the European Parliament – is still to be fully ratified.

He said: “Almost certainly, you can put your mortgage on the European Parliament endorsing this trade deal, not so much because it loves it, although there has been a fair amount of love for it today, it’s because it wants to move on. It feels that the parliament has done its job, it has scrutinised it, had a look at it, had a moan, patted some people on the back, given Mr Barnier and standing ovation, and now it will say it is time to move away from the rancour of Brexit and move on towards a new partnership.”

Earlier this year, MEPs declined to set a date for a vote following a row over the UK’s action in relation to post-Brexit arrangements for Northern Ireland.

But with the European Parliament facing an end of April deadline to ratify the agreement, MEPs will now make their decision on the deal.

They are widely expected to approve the agreement, as a vote against the deal would likely see the EU-UK relationship move to World Trade Organisation terms, with quotas and tariffs.

But ahead of the vote, Ms von der Leyen noted how there had been “some reluctance” among some MEPs as to “whether it is right to ratify this agreement when existing commitments are not being respected by one side”.

She told MEPs she shared “the concerns you have on unilateral actions by the UK” in relation to Northern Ireland since the post-Brexit trade deal came into force on 1 January.

Businesses on both sides of the Irish border have been struggling to adapt to the implications of the deal, which sees Northern Ireland remain part of the EU customs area, effectively moving the border to the Irish Sea.

The Protocol is an agreement managing that process and requiring a host of new checks and procedures to protect the EU single market, which has led to issues including supermarket stock shortages.

“We have obviously seen a number of issues arise since then,” Ms von der Leyen said.

“Some were to be expected, others are teething issues, and many are the consequence of the type of Brexit the UK chose. But regardless of the reasons, we need to focus on joint solutions. Unilateral decisions will get us nowhere.”

Ms von der Leyen explained “this is one of the reasons” why ratification of the post-Brexit trade deal “is so important”, adding: “It will give us the tools we need to ensure full and faithful compliance with the obligations, which both sides signed up to.

“And it will also focus minds on finding pragmatic solutions where they are needed.”

She told MEPs “some progress” had been made in talks between the UK and EU over Northern Ireland, with a “new, constructive dynamic” in “recent days and weeks”.

But Ms von der Leyen added: “We need solutions – not soundbites if we are to make the Protocol work for the benefit of everyone in Northern Ireland.”

Outlining the other benefits of ratifying the Trade and Cooperation Agreement, Ms von der Leyen said it “comes with real teeth – with a binding dispute settlement mechanism and the possibility for unilateral remedial measures where necessary”.

“Let me be clear: We do not want to have to use these tools,” she added.

“But we will not hesitate to use them if necessary.

“They are essential to ensure full compliance with the TCA and the Withdrawal Agreement, which were both negotiated in such fine detail and agreed by both sides.”

UK Shellfish workers say some are at risk of losing their homes because of a ban on exporting their product to the EU.

Meanwhile, the EU’s chief Brexit negotiator Michel Barnier described the UK’s exit from the EU as “a failure”.

He told MEPs: “This is a divorce. It’s a warning, Brexit, and it’s a failure – a failure of the EU.

“And we have to learn lessons from it as politicians here in the European Parliament, in Council, in the Commission, in all of the capitals.”

A Scottish fisherman has threatened to dump seafood outside Parliament if export barriers are not resolved.

He continued: “Why did 52% of the British vote against Europe? There are reasons for that – social anger and tension which existed in many regions in the UK but also in many regions of the EU.

“Our duty is to listen and understand the feelings of the people.”

He added that the anger felt by citizens “shouldn’t be confused with populism” and the EU should do “everything to respond to that”.

COVID-19: Vaccines for people aged 42 and over in England