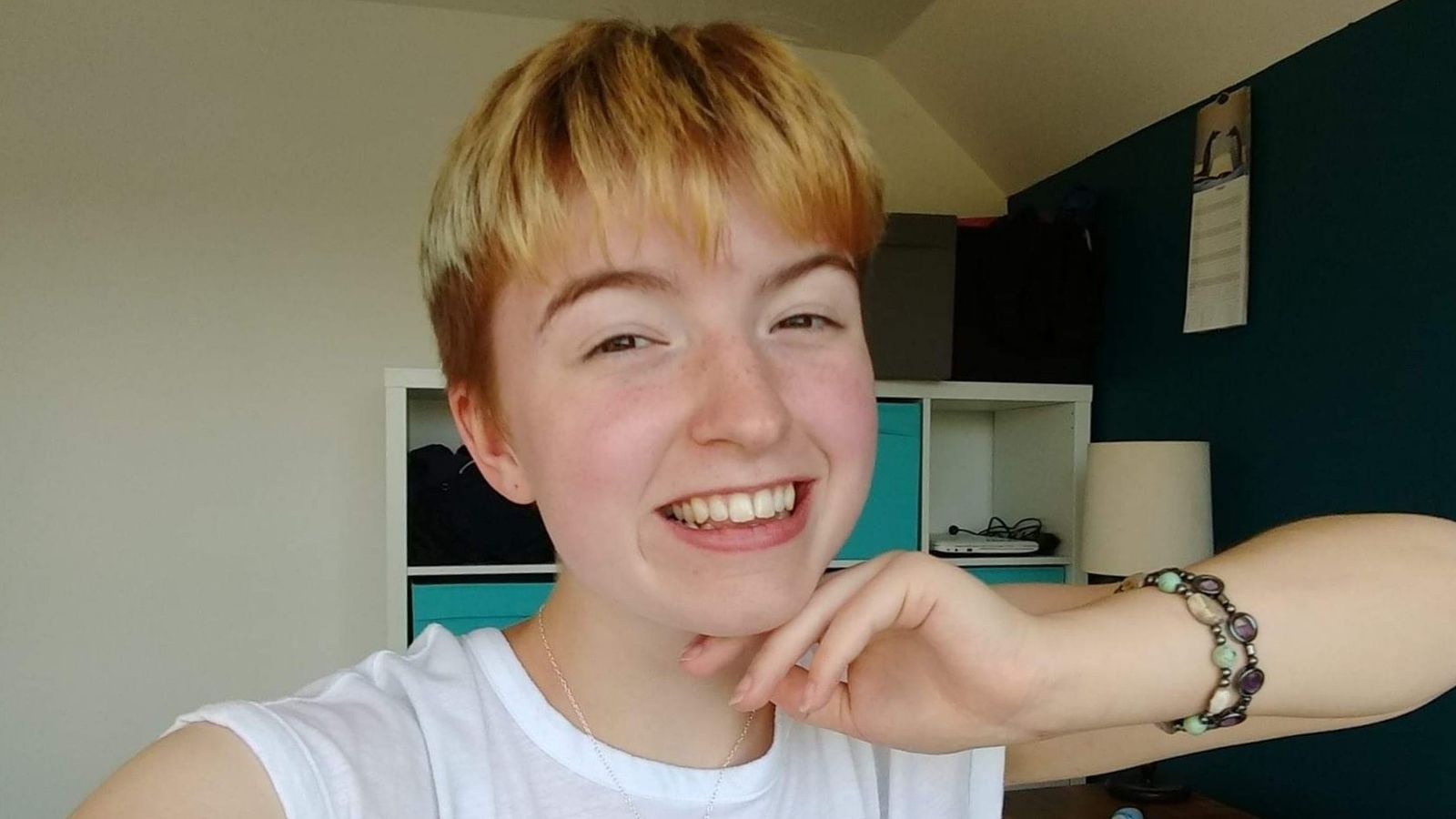 A former mental health patient, who was groomed and sexually assaulted by a predator who worked in the psychiatric unit where she was being treated, says she has been repeatedly failed by the system.

Nima Hunt has waived her right to anonymity to speak out for the first time about the sexual abuse she suffered when she was a vulnerable 16-year-old.

During her time in the unit, Ms Hunt told a member of staff what was happening but no action was taken.

Warnings had been sounded about her abuser Marcus Daniell before, but Ms Hunt was never told. And when the abuse was finally exposed, Ms Hunt was sent back to the same unit to continue with her treatment.

Image: Marcus Daniell was jailed for the abuse he subjected Ms Hunt to. Pic: Devon and Cornwall police

It is a catalogue of serious failings that left a vulnerable child with mental health problems alone, frightened and exposed.

Former health secretary Jeremy Hunt told Sky News Ms Hunt’s case had “shone a spotlight on some profound inadequacy in the mental health provision that we give to children and young people”.

Ms Hunt was admitted to Watcombe Hall – a privately run, residential psychiatric unit, paid for and commissioned by the NHS – when she was 16, after she experienced problems with her mental health as a 13-year-old.

Within days of her arrival at the unit, she was targeted and groomed by Daniell.

Image: Ms Hunt says: ‘I struggle today more than I ever have’

She told Sky News: “I remember that he used to give me lots of special treatment so he’d spend more time with me than other patients there when he was on shift.

“If I was on one-to-one support, so I needed someone with me all the time, then he’d often be my one-to-one. He would find a way to change or adapt the staff that were on shift to spend more time with me.”

Daniell convinced Ms Hunt that she was in a normal relationship. She said: “Right from the beginning with Marcus – I felt that I loved him – that I was in love with him – in the kind of relationship that you would have between a girlfriend or boyfriend.

“Not ever for any minute did I feel like he was doing something wrong. I had no idea that what was happening was grooming, absolutely no idea.”

Ms Hunt was just 16 and still a highly vulnerable child with mental health problems. Despite this, her abuser began to escalate their relationship.

She said: “The longer I was there and the more leave that I was taking with him, the more we were going on these escorted walks, the further it progressed.

“It moved on to, he was kissing me, initially that was on the cheek and then it moved to kissing my lips.

“Then it moved to him touching different parts of my body.”

Ms Hunt was never told the alarm had been raised about her abuser before. And when she eventually told a member of staff what was happening, instead of alerting the police or reporting Daniell’s behaviour, the staff member did nothing.

“Initially, she [the staff member] seemed surprised but she didn’t say it was wrong or bad or that it wasn’t right,” said Ms Hunt. “She just seemed surprised. It’s really hard to say exactly how telling her made me feel.

“At the time, I couldn’t really recognise that actually I was telling her because I needed her help,” she said.

Ms Hunt was discharged from Watcombe Hall in June 2017.

This is when the most serious assault took place. It was the day after she left the unit and had arranged to meet Daniell in his home town, Shaldon, in south Devon.

She said: “It was meant to be a birthday treat for me.

“He bought me a silver necklace with pendant on it.

“He’d brought a little picnic so we were sat in the woods near his home and in quite a secluded area.

“We put this picnic blanket out. We were sat eating and I just remember feeling sick, feeling really, really sick and having this gut feeling something was wrong.”

This is when Ms Hunt broke her silence and confided in her family. They recognised immediately she had been groomed and sexually abused – and they alerted the police.

After a police investigation Daniell finally pleaded guilty to 21 offences. He was sentenced to 11 years in prison for sexually abusing three teenage girls in his care.

But Ms Hunt’s ordeal did not end after she raised the alarm about Daniell’s abuse.

Her mental health deteriorated and she was told to return for treatment – back to Watcombe Hall, the same unit where the abuse began.

She said: “I don’t know how anybody would have thought that after experiencing something so traumatic the correct response, the right response and the best response for my mental health was to put me back in to the environment that had been so traumatic.

“My family and I felt so voiceless and confused and hurt and betrayed. It felt like there was no point in raising objections, the damage had been done.”

Daniell is responsible for the abuse but she also blames her care provider, the Huntercombe group.

Ms Hunt said: “They absolutely failed in their duty of care. There were so many obvious signs and signals and red flags the entire time I was there as a patient at Watcombe.

“There were so many signs that suggested what was happening between me and Marcus was wrong, horribly wrong.”

Ms Hunt’s lawyer, Thomas Beale of Bolt Burdon Kemp, told Sky News the Huntercombe Group was responsible for the safeguarding and care of extremely vulnerable individuals and it was “deeply concerning that they not only failed to meet the basic standards of care required but also allowed their patients to be abused by the very people that should have been there to protect them”.

He added: “The Huntercombe Group now has an opportunity to accept liability and provide the support that these individuals so desperately need to help rebuild their lives.”

The company is one of several independent health providers paid for by NHS England to provide inpatient units for children’s mental health services.

In 2019, a Sky News investigation raised concerns around some of these privately run hospitals, including Watcombe Hall.

At the time of the abuse, the Huntercombe Group was owned by Four Seasons Health Care Group but is not anymore.

In response to Ms Hunt’s case, it told Sky News: “We deeply regret the harm Miss Hunt experienced while in the care of Watcombe Hall, which at the time was owned and independently managed by The Huntercombe Group.

“Watcombe Hall failed to meet the expected standards and was subsequently closed in 2017. We are unable to comment further on this specific case until any legal action has concluded.

“Following a restructure which was completed in March of this year, we no longer own the business trading as the Huntercombe Group and cannot comment on current services.”

Since the closure of Watcombe Hall, two other CAMHS units run by the Huntercombe Group have also been shut down following concerns around the care provided.

Another unit was placed into special measures at the start of this year.

The current owner of the Huntercombe Group has told us improvements have been made since that inspection.

Her case raises more, serious questions about the care we provide to the most vulnerable in our society.

Former health secretary and current chair of the health select committee Jeremy Hunt says the case has “shone a spotlight on some profound inadequacy in the mental health provision that we give to children and young people”.

“And I do believe that huge effort is being made to improve the care that people like Nima receive but sometimes the progress feels painfully slow and that is because fundamentally what we need is a big expansion of our capacity to deliver mental health at all levels.”

NHS England responded to Ms Hunt’s case by saying: “Measures are in place so that patients receive high quality, safe care from the organisations commissioned and contracts are regularly monitored to ensure this happens.

“The NHS has significantly increased mental health support for people in the community so that people can get treated as close to home as possible.

“An additional £975m every year will be invested in community care by 2023/24 with an extra 345,000 children and young people getting the help they need.”

Ms Hunt entered into the children’s mental health system as a vulnerable 13-year-old needing urgent help. She is now 20 and requires support for the trauma she has suffered.

“I have a diagnosis now of complex post traumatic stress disorder as a result of what I lived through at Watcombe Hall of the abuse I endured there.

“I still self-harm, the severity of my self-harm has changed since I’ve been at Watcombe.

“I struggle more than I ever have now with my body in its physical form.

“The idea of having a woman’s body feels almost sickening to me because of what Marcus did. Because of what he made me believe about myself.”