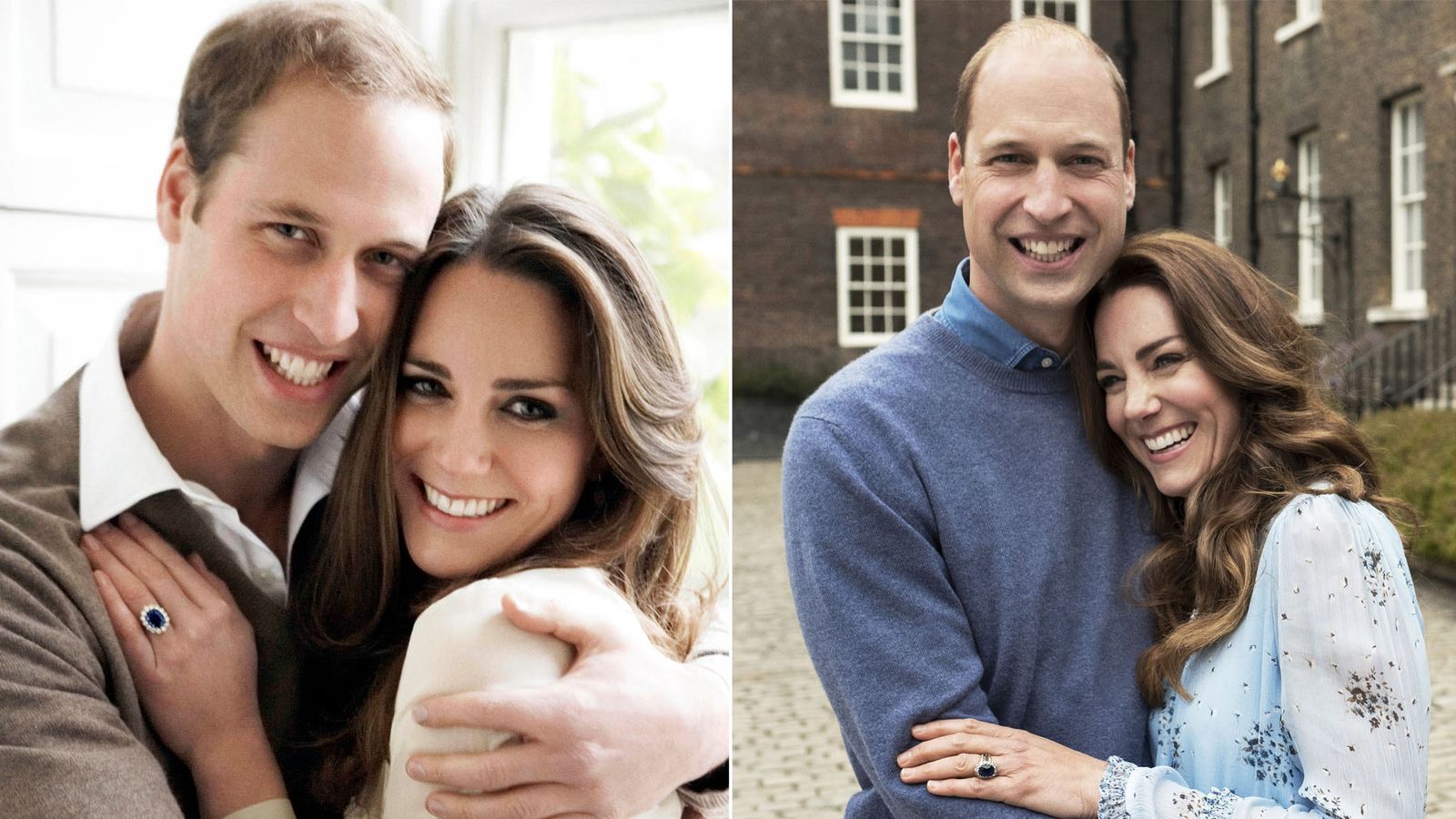 To mark 10 years since their wedding day, the Duke and Duchess of Cambridge have released two new photos.

The images – taken at Kensington Palace this week by photographer Chris Floyd – capture William and Kate beaming just as much as they were 10 years ago.

But throughout their marriage – and ever since their very early days dating at St Andrew’s University – the couple have had to get very used to life in front of the lens.

Here are some of their most memorable moments:

We start with a ring – a very special sapphire

Image: 2010: The official engagement announcement is made. Pic: AP

Prince William proposed with his late mother Prince Diana’s engagement ring while the couple were on holiday in Kenya – a 12-carat oval blue sapphire surrounded by 14 solitaire diamonds, set in white gold.

In an interview following their engagement, William said: “It’s my mother’s engagement ring. I thought it was quite nice because obviously she’s not going to be around to share in the fun and excitement of it all, so this was my way of keeping her close to it all.”

Married life started with a fairy-tale ceremony at Westminster Abbey with 2,000 people in attendance. It was sealed with a kiss on the balcony of Buckingham Palace.

“The kiss” picture was on the front pages of the world’s newspapers.

As well as their support for various charities, they have travelled the globe representing the Queen and the Royal Family – and managed to have a spot of fun at the same time.

On a trip to Canada in 2016, they enjoyed a spot of fishing. And in an unguarded moment, the Duke of Cambridge excitedly shows off to his wife the salmon he caught, prompting what looks like high praise.

Every couple has a hat snap

The duke and duchess, on a visit to Canada in 2011, went full western as they watched bull riding in Calgary, Alberta.

Who wore it best? (Kate)

The pair have obviously been determined to enjoy every moment of their life in the spotlight and make the best of it – as images of this trip to Wales show a very happy newly engaged couple in love.

Kate was in charge of pouring the champagne over the ‘Hereford Endeavour’ – an RNLI lifeboat – during a naming ceremony in Wales in February 2011. The visit had been highly anticipated because the couple had been keeping such a low profile since announcing their engagement the previous November.

Then come the kids

Image: Kate and William introducing baby George to the world in 2013

In their decade as a married couple, the pair have had three children, Prince George, who is now aged seven, Princess Charlotte, now five, and three-year-old Prince Louis.

Remember the crowds waiting outside the hospital for news of the birth of a future monarch? This was the moment the new parents emerged to reveal their first-born to the world.

All families have conflict

This snap has been used to illustrate lots of reported conflict between sisters-in-law Kate and Meghan – and likewise brothers William and Harry. Of course nobody outside the family knows what really happened behind closed doors, but one thing that can’t be denied is that this wasn’t a comfortable moment.

All the glamour. Oh, so much glamour

What’s the best thing about being a princess? Well, we don’t know, and we never will, but one of the perks has got to be the fashion.

It’s hard to choose just one – but this is a fine example.

Here Kate wears a black, floral print dress by Alexander McQueen with off-the-shoulder straps for the BAFTA in 2017.

Sorry Wills, this one’s all about her.

Friendly faces in a pandemic

Image: The Duke and Duchess in a video call with Casterton Primary Academy in Burnley. Credit: Kensington Palace

In an extremely tough year for everyone, who better than the royal couple to listen to how you’ve been getting on?

Both passionate campaigners for mental health, William and Kate spent much of the pandemic talking to key workers, NHS staff and just about as many people as they could to show how much they appreciate them.

Here they are on a call with a primary school.

As the official pictures marking Kate and William’s decade of marriage are released, the Royal Family has congratulated them.

A message on the monarchy’s official social media accounts marking William and Kate’s milestone decade of marriage said: “Wishing The Duke and Duchess of Cambridge a very happy wedding anniversary.

The traditional gift on a 10th wedding anniversary is tin, symbolising strength and durability.