‘Incredibly dangerous’: Young children among migrants picked up by Border Force in Channel 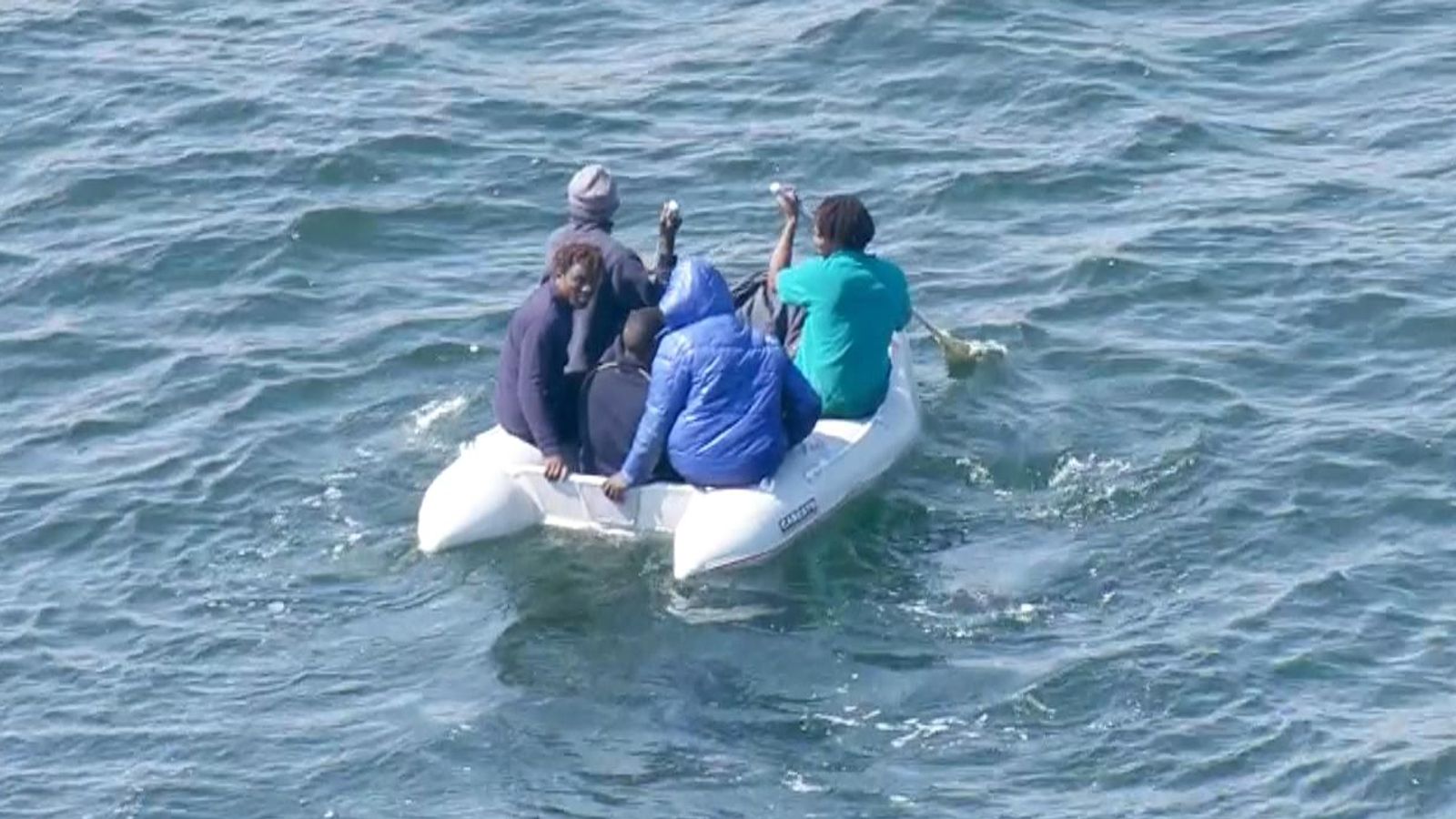 A group of migrants have been filmed by Sky News paddling away from France in a dinghy.

There were believed to be about five people on the small vessel, including two using oars, as a French maritime boat was seen nearby. It’s not known if the migrants were taken on board.

It comes on the same day a second group was witnessed crossing the Channel – and being picked up by Border Force officials.

Image: A group of migrants was filmed by Sky News in a dinghy paddling away from France

Sky’s Jemima Walker, reporting from the Port of Dover, said: “People on the ground here have shown us pictures of what we think are three patrol boats arriving this morning with many, many people on board, huddled very closely together.

“We believe from the pictures that there are about 100 people on those boats – and children certainly are among them.”

In one video, a boy who looks around five or six years old is standing on his own with a towel around his shoulders as he is helped by UK officials.

Image: A young boy who was standing on his own was helped by UK officials

Walker added: “There are still many, many people who are willing to get on those boats and make that incredibly dangerous journey.

“This year we have seen a big spike in people making those journeys compared to last year.”

A Home Office spokesperson said: “We are working closely with our partners in France to stop these unnecessary journeys and the ruthless criminal gangs behind them.

“As a result more than 2,500 people have been prevented from making the dangerous crossing so far this year, and we have also secured 65 small boat related prosecutions since the start of 2020.

“There is more work to be done and our New Plan for Immigration will fix the asylum system, cracking down on the business model of people smugglers who put lives at risk by facilitating dangerous journeys into the UK.”

The Home Office plans to make it much tougher for those who enter the UK illegally – using routes such as small boats and being stowaways in lorries – to claim asylum.

Billed as the “biggest overhaul of the UK’s asylum system in decades”, the government believes the changes will deal a significant blow to the organised criminal networks, who attempt to smuggle thousands of men, women and children into Britain each year.

The Home Office described the current asylum system as “collapsing under the pressures of what are in effect illegal routes to asylum, facilitated by criminals smuggling people into the UK and often resulting in the loss of life”.

Under the new plans, refugees who come to the UK through the government’s official resettlement programme will get indefinite leave to remain once they arrive.

Image: Dozens of migrants were seen on a Border Force boat on Friday after being picked up in the Channel

Those who arrive illegally, but still manage to successfully claim asylum, will receive a new “temporary protection status” rather than an automatic right to settle.

For people who have their cases considered and refused, the Home Office said it would seek their rapid removal from the UK.

But the plans have been condemned as a “divisive policy”, which will do nothing to stop people making desperate journeys.