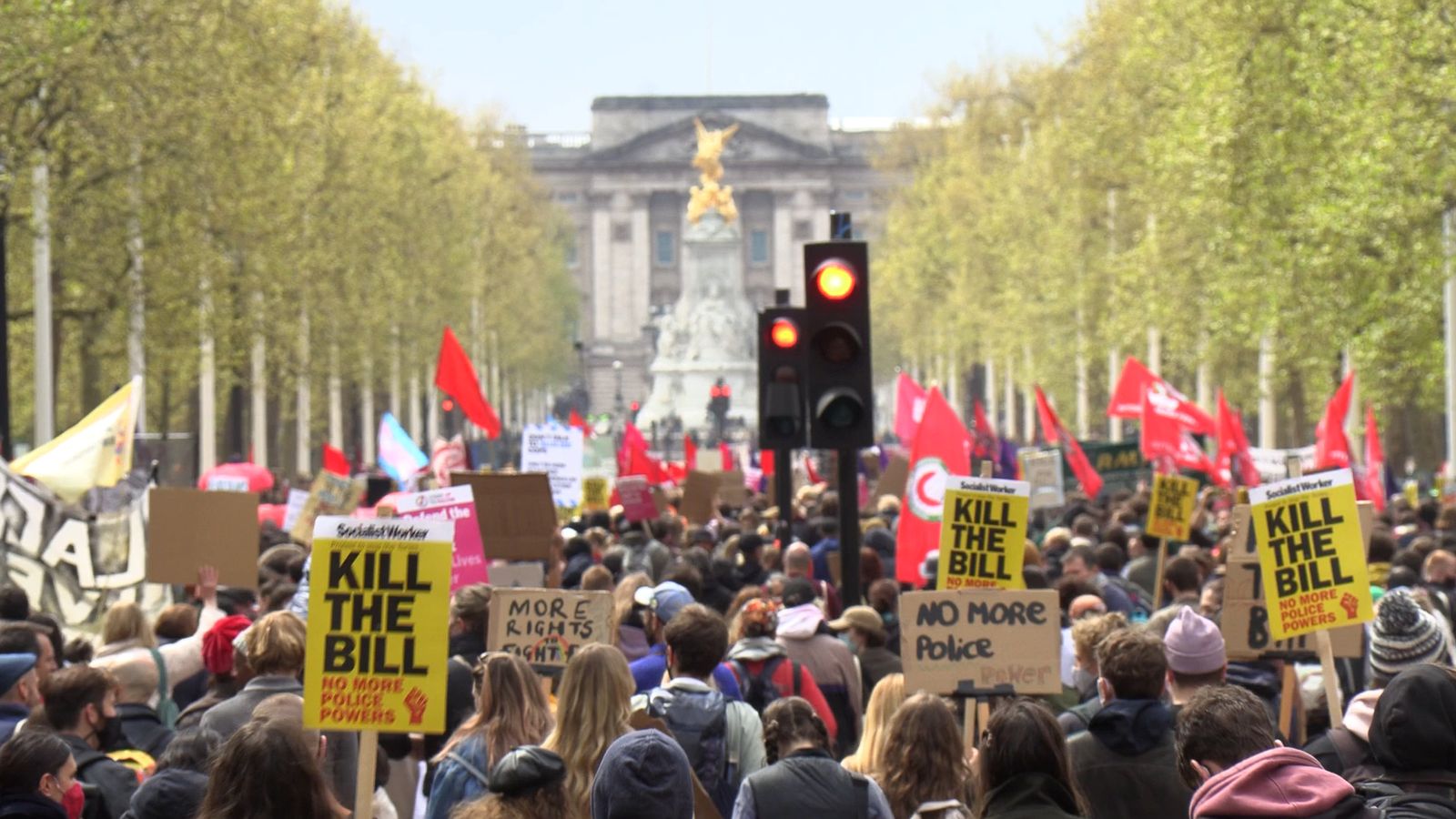 Thousands of people gathered in central London and other cities to demonstrate against a proposed bill which will hand police more powers to shut down protests.

The demonstrations were the latest in a series against the Police, Crime, Sentencing and Courts Bill, and were among hundreds of other protests that took place on May Day, traditionally the day for workers.

Thousands congregated around London’s Trafalgar Square and The Mall for the “Kill the Bill” demonstration from midday on Saturday.

Image: Protesters carry placards with the words ‘Kill the Bill’ and Black Lives Matter at the central London demonstration

After demonstrators later headed towards the Home Office, police said nine people were arrested and officers were “continuing to engage” with protesters who had gathered in a park in south London after the march.

Meanwhile, throughout Saturday, hundreds members of environmental activists Extinction Rebellion (XR) – one of the groups which the bill is said to be targeting – staged “protest of one” roadblocks to demonstrate against the government’s lack of action on climate change.

Although the central London protest was organised by feminist activist group Sister Uncut, the “Kill the Bill” movement is a coalition of several dozen activist groups which have joined forces.

They are campaigning to stop the latest police bill which is due to resume its path through parliament in May.

The central London protest also featured many placards supporting XR and the Black Lives Matter movement, the other group whose actions the bill was said to have been drafted partly in response to.

The proposed legislation would give police in England and Wales a greater ability to impose conditions on non-violent protests – including those deemed too noisy or a nuisance.

Anyone convicted of breaching it, once it becomes law, could become liable to fines or jail terms.

Police had appealed to organisers to adhere to the COVID restrictions on gatherings, which are still in force and to avoid violence.

Image: Protesters gather in Trafalgar Square to demonstrate against the Police, Crime, Sentencing and Courts Bill

Similar demonstrations to the one in London were staged in Sheffield, Manchester and Newcastle.

In Newcastle, protesters squared up to officers who stopped them accessing a police station.

A witness told PA: “Police closed the road and stopped access, there were a couple of scuffles and a few protesters were detained.

“After 30 minutes or so the protesters seemed to realise they wouldn’t get through so moved on.”

In Manchester, demonstrators occupied Portland Street in the city centre.

In Bristol, where there was anxiety after some of the most violent protests so far, Sky News correspondent Becky Johnson saw police block a road in order to stop protesters from getting on the M32.

A Home Office spokesman said: “The right to protest is a cornerstone of our democracy, but over recent years we have seen an increase in the use of disruptive and dangerous tactics.

“It is totally unacceptable to smash up private property, block emergency vehicles and prevent the printing press from distributing newspapers.

“The government will not stand by as the rights and freedoms of individuals, businesses and communities are trampled upon by a minority.

“These new measures will not stop people from carrying out their civic right to protest and be heard, but will prevent large scale disruption – enabling the silent majority to get on with their lives.”

The “protest of one” roadblocks saw people sitting alone on busy roads wearing signs with messages about their fears for the future, with many taking action to hinder the authorities’ ability to remove them.

Morgan Trowland, 38, glued himself to London’s Tower Bridge, prompting City of London Police to close it to southbound traffic.

The civil engineer from Hackney, east London, was later arrested and charged with obstruction of a highway.

Another man blocked Blackfriars Bridge holding a placard, nurse Andrea Muntiu, 36, blocked traffic in her home town of Ipswich, and other protests took place in towns and cities across the country, including Nottingham, Birmingham, Oxford, Bradford, Newcastle and Swansea.

XR spokeswoman Gully Bujak said the government was good at generating positive headlines but accused it of failing to have a plan to meet its goals.