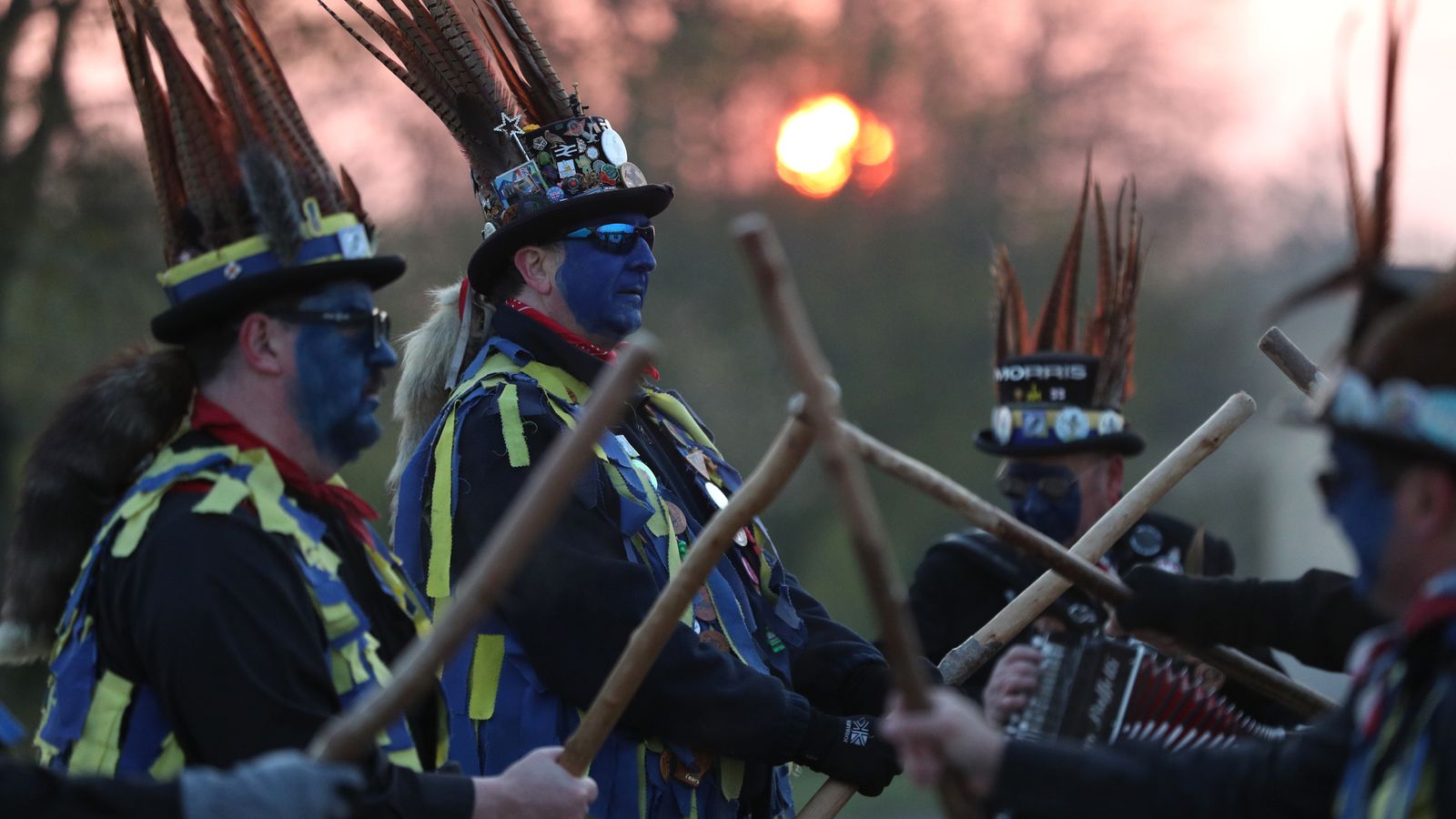 A group of morris dancers in Hampshire have swapped their traditional black face paint for blue, following concerns over racism.

The Hook Eagle Morris Men performed near the village of Hook in Hampshire on Saturday to mark May Day dawn, in their first show since January 2020.

Last June, cross-county group the Joint Morris Organisations put out a statement to ask dancing groups to stop the use of full-face black makeup in response to the Black Lives Matter movement in the wake of the death of George Floyd.

Image: The practice of painting faces is thought to have originated in the 1400s

John Ellis, 70, who dances with the Hook Eagle Morris Men has been with the group since its inception as a church group in 1991, and describes the move as “by far and away the biggest if not really the only change we’ve experienced”.

He added that other troupes around the UK has changed their face paint to different colours, with some opting for green, while a group in Kent now uses black and yellow stripes.

Mr Ellis says the tradition of using black face paint derived from when poor farm workers in the 1400s would use soot to disguise themselves so they could beg – which was illegal at the time.

That tradition “died out”, according to Mr Ellis, but it was revived in the 1970s by border morris dancers, which was a type of dance that originated on the England-Wales border.

“We adopted this idea because the dancing is really easy, good fun and we quite like the idea of dancing in disguise.”

Only three people went to watch the Hook Eagle Morris Men dance on Saturday morning, including a photographer and a cafe owner, with Mr Ellis saying that was “pretty good”, considering the performance was at 5am.

Image: Members of the Hook Eagle Morris Men welcomed in May Day on Saturday morning

The group maintained social distancing by using the “longest sticks we could get our hands on”, and avoided the usual practice of gripping each other around the waist.

Mr Ellis said it was “fantastic” to be able to dance again after 16 months.

“It was completely brilliant… we had a fabulous sunrise, which is unusual.

“There is something about dance, no matter what kind of dance… the endorphins kick in, you just have fun.

“And when you’re with a bunch of guys that you’re with probably for 50 weeks of the year, it really is a team spirit.”