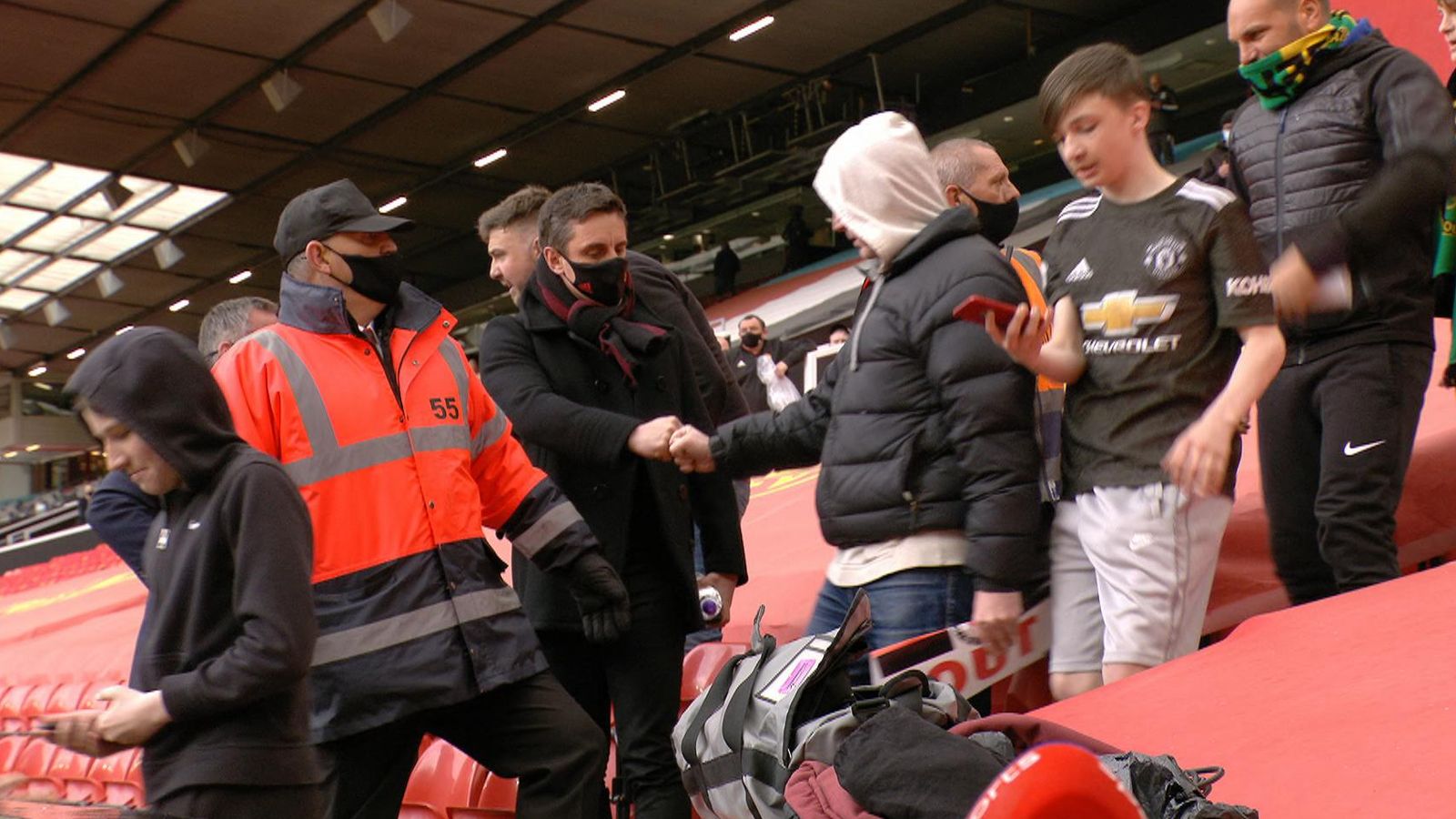 Gary Neville has blamed Manchester United owners the Glazer family for Sunday’s fan protests, and urged them to put the club up for sale.

On Sunday afternoon, Man Utd fans began protesting outside The Lowry hotel, where Ole Gunnar Solskjaer and his team were preparing for their match against Liverpool.

There were then further protests at Old Trafford, which saw hundreds of fans break into the stadium and reach the pitch, before being escorted out by police.

It was confirmed on Sunday evening the match would be postponed and will be rescheduled in due course.

Image: The Sky Sports pundit has called on the Glazers to sell up

Former United defender Neville said: “This is a consequence of the Manchester United owners’ actions two weeks ago. There is a general distrust and dislike of the owners, but they weren’t protesting two or three weeks ago.

“The Glazer family are struggling to meet the financial requirements at this club and the fans are saying that their time is up.

“My view is quite simply that they’re going to make a fortune if they sell the club and if they were to put it up for sale now I think the time would be right, and it would be the honourable thing to do.

“There’s huge discontent, not just across Manchester United fans, but I think for football fans up and down the country and I think they are just saying enough is enough.

“The Glazer family have been resilient and stubborn for many, many years. I think they are struggling to meet the financial demands that this club needs and have done for some time.

“It had a team that was consistently getting to Champions League quarter-finals, semi-finals and finals regularly and winning the league every season or every other season.

“If you look at the club now, this stadium I know it looks great here but if you go behind the scenes it is rusting and rotten. If you look at the training ground it’s probably not even the top five in this country, they haven’t got to a Champions League semi-final for 10 years.

“We haven’t won a league here at Manchester United for eight years. The land around the ground is undeveloped, dormant and derelict while every other club seems to be developing the facilities and the fan experience.

“All football fans should unite today behind what Manchester United fans have done today because what happened two weeks ago was really dangerous for English football.

“Today there is anger. I would hope that tomorrow it switches towards mobilisation towards reform, regulation and behind the fan-led review.

“Maybe I’m being naive, but Manchester United and Liverpool should be acting like the grandfathers of English football, demonstrating compassion, spreading their wealth through the family and being fair.

“But they’ve demonstrated self-greed and tried to walk away with all the money themselves, letting the family struggle below. That’s not what you do at these clubs. An apology is not good enough.”

The former England defender added: “Today will be a waste of time if there isn’t reform in English football.

“The reality is that what happened two weeks ago has ignited the United fan base into life again. It’s brought them back to life. Fifteen years ago, there were a lot of fans who were upset, and every one I speak to are absolutely disgusted by what happened a fortnight ago.

“United were leading this thing, as were Liverpool, two weeks ago. They are the biggest clubs in this country.

“We cannot forget what they did two weeks ago, which was really dangerous for English football. They tried to walk away and create a closed shop league that would’ve created a famine in this country for every other football club.”

Former Manchester United captain Roy Keane said: “The United fans have had enough and they’re doing it because they love the club.

“It’s not just as a result of what’s happened the last two weeks with the Super League… it’s been building for a number of years. They’ve come to the end and feel enough is enough. It’s a huge statement for the game to be called off.

“The leadership of the club has not been good enough. When they look at the owners, they feel it’s just about making money. The United fans have looked at the Glazers and thought enough is enough.

“They’re doing it because they love the club. Some people won’t agree with it, but sometimes you have to put a marker down for people to take notice.”

“There will always be idiots, but I actually think what the United supporters have done today is a good thing in protesting and being not happy about what’s going on at the club,” he said.

“There will always be one or two people who take it a step too far. There’s always someone who does something stupid. That shouldn’t be what dominates the news.

“What the Glazers have done to the club over the last 10 or 15 years, the fans aren’t happy. They should always be able to protest and in the main the supporters did so in the right way.”

Sky Sports’ Graeme Souness said: “I hope I’m wrong but it’s a big decision to call the game off. Either something’s gone on that we don’t know about and if you’ve come out today to achieve something that would be seen throughout the world, they’ve achieved that – and more, by the game being postponed.

“For the police to say it’s not safe for the game to take place, it would suggest that something else has happened that we don’t know about.”

A statement from the Merseyside club said: “Liverpool Football Club was in full agreement with the decision to postpone today’s fixture as a result of ongoing events at Old Trafford and the surrounding area.

“It is our position that public safety must be the number one factor in any such decision, with the ability to provide a secure environment for the participants, staff and officials being a particular priority.

“It was clearly not possible for this to be guaranteed today due to a situation which escalated rapidly.”

Andy Burnham, mayor of Greater Manchester, said he “fully understands” supporters’ concerns and said it was “essential that those running the club and the game listen to them”.

He tweeted: “It is important to make clear that the majority of supporters made their protest peacefully today. However, there is no excuse for the actions of a minority who injured police officers and endangered the safety of others.”

There has been little reaction on social media as football clubs, players, athletes and a number of sporting bodies are taking part in a four-day boycott of platforms in an attempt to tackle abuse and discrimination on their platforms.