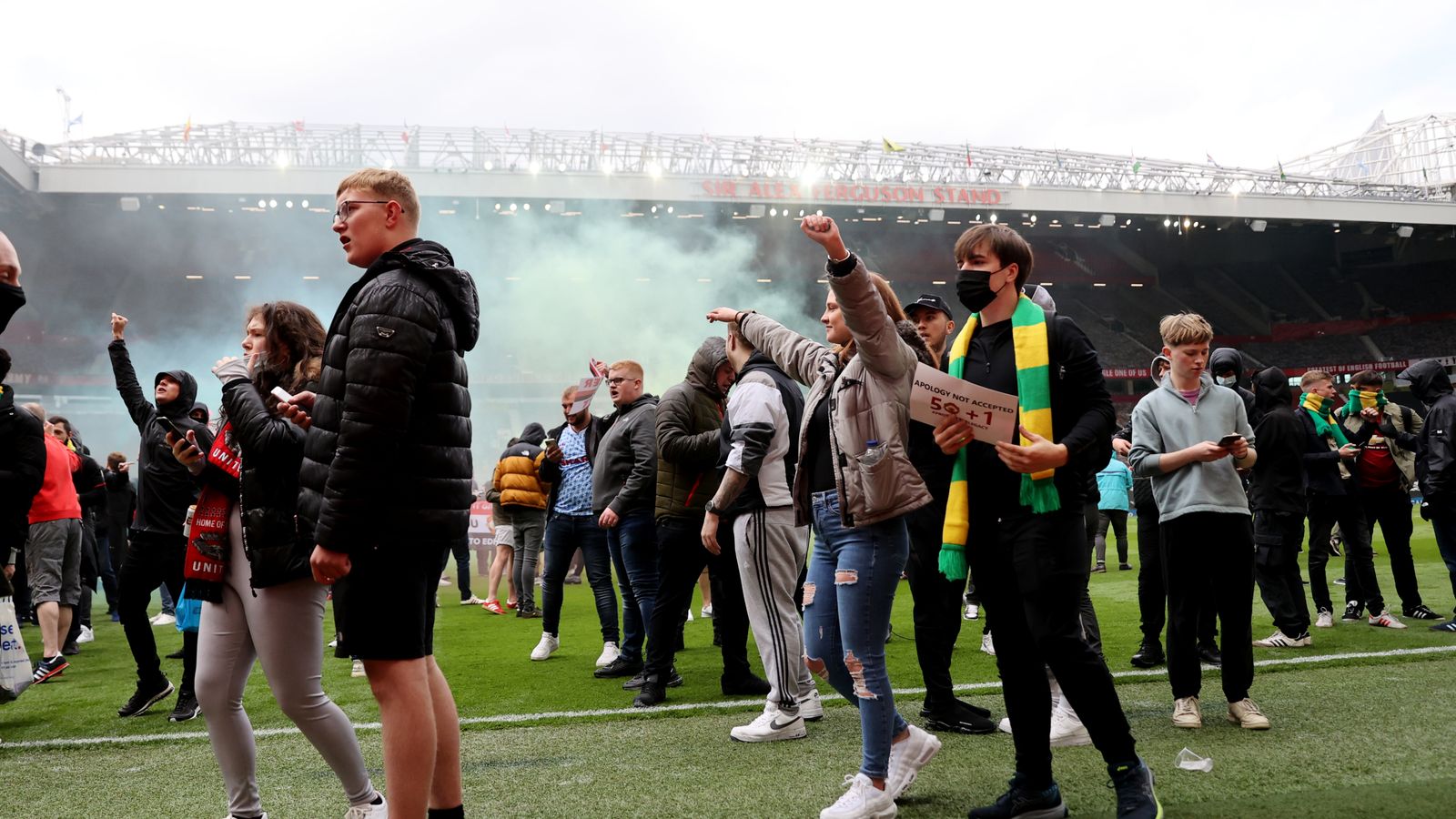 Several hundred fans stormed the pitch to demonstrate against the club’s American owners before United’s scheduled game against Liverpool on Sunday, which eventually had to be postponed for safety reasons.

Two officers were injured during the protests, including one who needed emergency treatment for a “significant slash wound to his face” after being attacked with a bottle, Greater Manchester Police said.

In a statement posted on their website, United said reports that protesters “were able to access the stadium and pitch via a gate opened by club staff are completely incorrect”.

The Premier League club said that “while many fans wanted to exercise their right to protest and express their opinion peacefully, some were intent on disrupting the team’s preparation and the game itself”.

“After breaking through barriers and security on the forecourt, some protesters climbed the gates at the end of the Munich tunnel, then forced access to a side door in the stand, before opening an external door that let others through to the concourse area and the pitch,” the statement read.

“A second breach occurred when a protester smashed the door of a disability access lift, enabling a group to enter the stand.

“The majority of our fans have and will condemn criminal damage, along with any violence towards club staff, police or other fans, and these now become a police matter.”

United said the club had “no desire to see peaceful protestors punished, but will work with the police to identify those involved in criminal activity, and will also issue its own sanctions to any season ticket holder or member identified”.

The club said a new date for the fixture with Liverpool will be announced after talks with the Premier League.

The FA told Sky Sports News it is looking into the events that led to the postponement, and it is liaising with the club, the Premier League and safety authorities.

Footage was posted on social media showing the injured officer with a slash wound to his cheek.

“No officers should be subjected to such unnecessary despicable violence at any event.”

Outside the stadium, police said there were more than 1,000 supporters. Most were protesting peacefully but a group started throwing bottles and barriers at police and horses.

Missiles thrown at police in stand-off

Boris Johnson said he understood the “strength of feeling” surrounding the protests, but not the “disruptive behaviour”.

The prime minister said: “I don’t think it’s a good idea to have disruptive behaviour, demonstrations of that kind.

“But on the other hand, I do understand people’s strength of feeling.

“And I think that it’s a good thing that we have been able to do things that make it pretty clear that the European Super League is not going to be appreciated by the people of this country, or by this government.”

Speaking to Sky News on Monday, Foreign Office minister James Cleverly said there was no excuse for violence but that fans’ “frustrations” needed to be recognised.

Former Manchester United captain Gary Neville blamed United’s owners, the Glazer family, for the protests and urged them to put the club up for sale.

The Sky Sports pundit said the European Super League debacle of a few weeks ago had reignited long-held anger over the Glazers – whom many supporters feel are out of touch and only care about profit.

Neville: ‘The Glazers have never had the fans trust’

The club’s latest accounts show gross debt is now £536m. United were debt-free before the Glazers took over.

The fallout from the attempted breakaway European Super League has also triggered protests in recent weeks at other clubs who were set to join, including Chelsea and Arsenal.

The project appears dead after the universal outcry, but the saga has reignited the unease over foreign ownership of clubs and what many fans see as the sidelining of supporters in favour of profit.